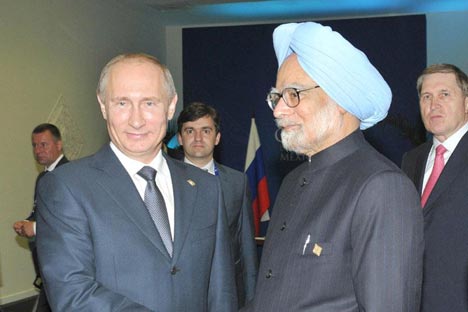 The Prime Minister, Dr. Manmohan Singh meeting the President of the Russian Federation, Mr. Vladimir Putin, on the sidelines of the G-20 Summit, at Los Cabos, Mexico on June 19, 2012. Photo Division, Ministry of Information & Broadcasting, Government

India and Russia have different political systems, but corruption in both countries is deeply entrenched and all-pervasive. The only difference is that in India a powerful anti-corruption movement led by the civil society has emerged, whereas in Russia civic activism is struggling to make its presence felt, says Vinay Shukla.

The issue of corruption is vastly complex and intriguing. It is a global problem and it is difficult to find a regime in the world which is indifferent to this scourge as it virtually drains trillions of dollars from the national development. India and Russia are no exception.

The leaders in New Delhi and Moscow untiringly express their resolve to spare no efforts in uprooting corruption in their governments, but the common man and business in India and Russia have become accustomed to paying bribes for the facilities, which otherwise should have been granted to them free of cost.

In 2011 India was ranked 95th out of 178 countries in Transparency International's Corruption Perceptions Index, 8 notches below the preceding year’s 87th spot, while Russia was 143rd, an improvement of 11 points as compared to the ranking of 2010.

“Ne podmazhesh- ne poyedesh!” is a popular Russian saying, which means ‘until you oil- nothing will move’. Every region in India has a saying with similar meaning. The Indian society has imbibed some of the corrupt practices dating back to the Mughal Empire and the British Raj, albeit in a transformed form. The Russian empire, built on the ruins of the Golden Horde, not only incorporated the Asiatic forms of corruption like graft in cash or kind, but also the more sophisticated western methods of corruption like kickbacks.

Even in the Soviet times, said to be free of this bane, corruption in different forms flourished in the country, specially in the Caucasian parts, with large families and strong traditions of kinship. In both countries, it is a common thing for the street vendors and petty shopkeepers to pay ‘dihadi’ (daily bribe) for protection to police. The businesses which are thriving have to pay to scores of fire, sanitary and other state inspectors, who almost every week raid their premises just to collect their ‘dues’.

My neighbour in Russia, who was once a wholesaler of Chinese toys, recalled that even in China, which he visited frequently to source the goods, corruption exist in many forms. “I wish they (tax, fire and other state inspectors) would also come to me only twice in a year (on New Year and National Day). In this case I have no problem, but they come every week, in spite of ex-President Dmitry Medvedev and incumbent Vladimir Putin’s orders not to ‘koshmarit’ (nightmare) the business, he said. Running a transport company is equally difficult in Russia, until it belongs to some powerful bureaucrat or his protégé. In India, these transport companies often belong to politicians.

The root cause of modern corruption in Russia is the ongoing process of ‘selling the Soviet Empire’, when  during the initial post-Soviet economic reforms in early 1990s, the assets of the world’s second super power were virtually grabbed by a handful of oligarchs close to the Kremlin.

A huge chunk of the population, who had built the oil extraction industry in Siberia and other natural resource mining capacity in the remote parts of the country, felt cheated. Their rage was but natural as they were driven by the lofty Communist ideals in their youth that inspired them to build the natural resources industry.   Their offspring, the younger generation of Russians, after joining the administrative jobs in various government departments considered themselves as the ‘legitimate’ stakeholders in huge assets created by their parents and wanted their share from the business. But their disillusionment with the system has only become stronger. According to local media reports and aspiring businessmen, in today’s Russia, every single signature of approval by an administrative official carries a price tag.

In my subjective view, contemporary Russia lacks the national idea and today’s socio-economic reality – crony capitalism -- is reminiscent of the Soviet-era Communist propaganda about the ugly face of capitalism.  Small wonder, the law enforcement bodies lost the public trust due to alleged rampant corruption after the Soviet collapse. The traffic police are notorious for corruption and highly unpopular with the people.

Back in 1992, Gavril Popov, Moscow City Council’s first democratically elected mayor, had said that he did not see anything bad in the officials seeking some fees for the prompt services. The corruption now has become so all-pervasive that not many bother about it too much. Most of the Russians, who have drastically improved their living standards during the first two terms of President Vladimir Putin, are tolerant towards corruption in day-to-day life.

In some ways, what one considers corruption is relative and depends on value-systems and peculiarities of various cultures. civilizational. Was ‘guru dakshina’ in India a bribe to the teacher? Why it should be considered a bribe in Russia? When in Russia and India on the New Year and Diwali you gift cash and presents to your postman and household servants, is it a bribe?

Cutting back to modern-day Russia, Dmitry Medvedev, former president and incumbent prime minister, had introduced several bills to counter corruption in the bureaucratic apparatus and ordered the annual declaration of assets by the officials. However, there has hardly been any case of prosecution of a key government minister or official for disproportionate assets, a common thing in India.

“Compare corruption in India, with its 2G telecom scandal, to Russia. In India, corruption leads to prosecution. The Supreme Court and high courts are incorruptible; you never hear of judges being bribed. They deal with problems as they come. It’s a different ball game in India,” says Shan Nair, CEO of Nair & Co, a global risk management solutions firm.

Percentage of users who paid a bribe to one of nine service providers in 2010:

However, India is ahead of Russia in the public movement for countering the corruption. Besides scores of anti-corruption NGOs active in the country, the mass stir by social activist Anna Hzarae and his team over the Lokpal (anti-corruption ombudsman) bill has hogged headlines in national as well as international media.

Unlike India, Russia has a weak civil society and most of its NGOs are ‘toothless’. Against this backdrop, the wave of demonstrations that swept Russia in the wake of allegedly rigged elections to the State Duma, the country’s lower house of parliament, in December 2011 was basically a protest against the rampant corruption. Putin, who has just begun his third presidential stint, therefore, faces the formidable task of bringing down corruption to tolerable limits so that this scourge does not jeopardise internal stability and developmental goals of Russia.