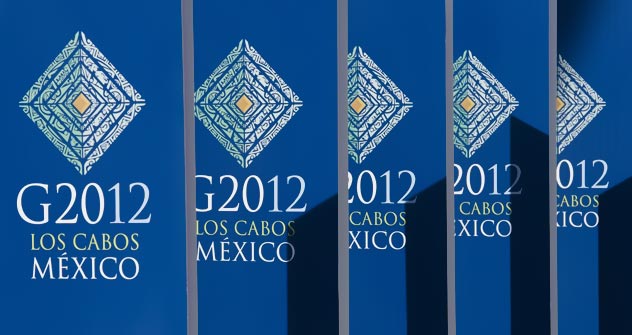 G20 has acquired the status of a leading global forum on economic and financial problems, according to Putin. Source: AFP / East News

The global economic crisis left no country untouched; the G20 must work to improve international trade and financial institutions

Four years ago, the world economy was faced with an unprecedented crisis. The upheavals were of a markedly global character and, to varying degrees, affected everyone.

Such massive challenges called for fundamentally new approaches on the part of the leading states. For the first time in history, the leaders of the countries that account for almost 90 percent of the world’s GDP demonstrated a genuine desire and ability to coordinate economic policies. Most importantly, they kept the world from sliding into the impasse of trade wars and total protectionism and proceeded to put the world currency and financial system in order.

Thus the G20, which existed until 2008 only in the format of regular meetings of finance ministers, acquired the status of a leading global forum on economic and financial problems.

At the height of the crisis, it was thanks to the G20 that measures were taken to increase the capital of all the main multilateral development banks and the resources of the IMF. That, in turn, enabled these institutions to support the countries most severely affected. A long-term agenda was proposed for reforming the financial regulation system and principles were outlined for protecting the rights of consumers of financial services. A milestone was reached in 2009 when the G20 leaders set up the Financial Stability Council as a coordinating body to develop updated rules of conduct in the financial sphere.

Yet not all the systemic problems have been resolved and the consequences of the 2008 crisis are still visible. The accumulated imbalances are manifest in the form of budget deficits, the dire state of banks and the level of debt to GDP in the developed countries. Moreover, in recent months, the negative dynamics of the markets and other alarming signals have caused analysts to come up with very pessimistic forecasts.

These processes are taking place against the backdrop of changes in the landscape of the world economy. According to expert forecasts, in the period up to 2017, the developing markets will grow more than 3.5 times faster than traditional developed countries, and twice as fast over the following 15 years. The geography of commodity and financial flows are also changing along with the global growth points.

What is Russia’s position in the emerging situation? Russia, as the sixth biggest economy in the world according to purchasing power parity, has strengthened its financial and budgetary system in recent years. Russia is in third place in terms of gold and currency reserves and the Russian economy is growing at a rate of 4.3 percent, the highest rate among the major European economies. Today, unlike in 2008, the national banking system is more resistant to fluctuations on the world financial market.

At the same time, minus the revenue brought in by high oil and gas prices, Russia has a high budget deficit; the non-oil and gas deficit reached the maximum allowable level during the crisis years.

We are well aware that reform must be speeded up. This is necessary for continued sustainable development and for reduced economic dependence on the commodity trade. We will, therefore, seek to improve the investment climate radically, create globally competitive conditions for doing business in Russia, further remove infrastructure limitations, improve the quality of human capital and modernize the economy as a whole, while strictly meeting our social obligations. All these reforms constitute the key agenda for all levels of government in Russia.

The G20 summit is taking place in the context of growing uncertainty. In addition to rectifying the dire financial situation in some European Union countries, most states in the world will have to find a reasonable balance between the need for fiscal consolidation and rigorous budget discipline and addressing social problems, such as ensuring employment and maintaining stable pension systems.

Furthermore, the continuing problems with banks, which send markets tumbling every now and again, show that the world’s financial architecture is still in need of reform and is fraught with many risks and contradictions. It has not acquired firm ground under its feet and is not tied to real assets and values. On the contrary, the dynamics of the financial markets have recently been diverging still more from the fundamental indicators of the real economy. This creates additional prerequisites for growing mistrust and instability that might cause fits of financial panic.

The need for new steps is obvious. First of all, it is necessary to strengthen regulation of the trade in derivatives and ensure consistent use of the new Basel 3 financial regulation system, which reduces the chances of “bubbles” appearing. I think it is in our common interest to promote the emergence of new reserve currencies and broadening of the sphere of their use in global trade and investments. Finally, a distinct and very pressing issue is the G20’s ongoing commitment to the reform of international financial institutions, including the IMF and the World Bank – specifically, making real progress on the long-tabled issue of strengthening the role of developing countries and emerging economic powers in running such institutions, including working through and adopting fundamental decisions.

In this connection, I would like to make one more important point. We all know that financial instability has inevitably led to increased trade protectionism. In 2009, global trade shrank by 12 percent, record drop since the end of World War II. Not the least of the reasons for that was the way some countries, in spite of public assurances, made extensive use of tough measures to protect their markets. It is time to admit that, against the background of statements decrying protectionism, the practice is assuming more sophisticated forms, for example disguising itself as environmental and technological restrictions.

It is high time to stop being hypocritical and to agree honestly on the allowable level of protective measures aimed at preserving jobs in times of world crisis. This is particularly important for Russia, because the country is joining the WTO this year and intends to take an active role in discussing future rules of world trade. For example, Russia will make every effort to get the Doha round of talks moving again.

All these topics will be discussed at the summit in Mexico. They will be our priorities during the Russian presidency of the G20 next year, alongside issues of global energy security. We know how important it is to preserve trust within the G20. It may be devalued if jointly made decisions remain well-meaning declarations and hang in the air without implementation or verification.

And, of course, the G20 must not morph into just another elite club that selfishly takes care only of its members. The essence and meaning of our joint activities is to work our fair rules for sustained development of the entire global economy. This will be the logic Russia will offer its partners at the Los Cabos summit.

This opinion piece by the Russian president was published in the Mexican newspaper El Universal leading up to the G20 summit at Los Cabos.