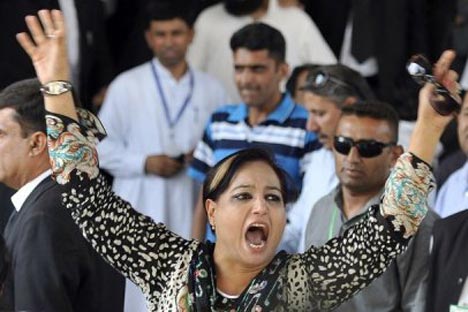 Some Pakistani media called the emerging situation ‘unfortunate’ and ‘soft coup,’ and expressed apprehension of further deepening of the crisis.

The dismissal of Pakistani Prime Minister Yusuf Raza Gilani by Pakistani Supreme Court has pushed the South Asian country to another brink of crisis, though the effects of the dismissal have not been clearly visible yet. The new development has widened the gap in understanding between the civilian institutions – legislature and executive,  and judiciary –  to the extent that some Pakistani media called the emerging situation ‘unfortunate’ and ‘soft coup,’ and expressed apprehension of further deepening of the crisis with the assertive Supreme Court adopting the same approach towards the successor of Gilani. For Pakistan, which is currently embroiled in conflict on various fronts including a weak economy, troubled relations with the US, and rising militancy and fundamentalism, the emerging scenario does portray a fragile political situation in which the nascent democracy appears grappling to take roots in a shaky soil. Amidst this turmoil, so far the all-powerful army has maintained calm, apparently adopting a neutral posture in this tussle between the civilian institutions.

To narrate briefly, the story goes back to 2007 when then army ruler General Pervez Musharraf granted amnesty to a host of political leaders including Benazir Bhutto and her husband Asif Ali Zardari so that they can take part in active politics in Pakistan. Bhutto’s party People’s Party of Pakistan (PPP) emerged victorious though she fell victim to the bullets of an extremist during electoral campaign, and it was incumbent upon her widower to take cudgels of power at Islamabad. Dubbed ‘Mr ten per cent,’ Zardari smooth sailed to remain at the top by political manoeuvring and also by using the Bhutto legacy. Meanwhile, the judiciary emerged victorious against the Musharraf’s policies and the main protagonist then sacked Chief Justice of Supreme Court, Iftikhar Muhammad Chaudhry was reinstated to his position after the general elections. Known for his clean image, Chaudhry pursued money laundering cases against Zardari and ordered Prime Minister Gilani to open the cases against him. Here came the turning point. The Prime Minister argued that the President enjoys immunity under the law; hence the case cannot be opened by writing to the Swiss authorities. The court initiated contempt of court case against Gilani and pronounced him guilty on 26 April 2012. The Speaker of Pakistan’s General Assembly, Fehmida Mirza allowed Gilani to continue in his job as head of the executive despite the court prouncement.

On the other hand, the opposition political parties filed petitions against Gilani regarding his continuation in office. The final clincher came on 19 June 2012, when the Supreme Court dismissed Gilani from office with effect from 26 April, and ordered the Election Commission to declare Gilani disqualified. In the words of the Court, “Yusuf Raza Gilani stands disqualified as a member of the Majlis-e-Shoora (parliament). He has also ceased to be the prime minister of Pakistan ... the office of the prime minister stands vacant.”

The Supreme Court judgment will have serious implications from Pakistan’s polity. Earlier, while the common fear was the return of the army rule (in fact Pakistan has been ruled more by army generals than civilian rulers), now the apprehension has been that the increasing tussle between executive and judiciary may further be deepened and widen to a tussle between legislature and judiciary, thus crippling the already fledgling democracy in the country. One of the noted news daily of Pakistan The Dawn stated, “In disqualifying a sitting, democratically elected prime minister, the Supreme Court has taken an extraordinary - and unfortunate - step. This whole story could have played out very differently, in ways much less disruptive to the nascent democracy this country is trying to build.” The noted human rights activist, Asma Jehangir cautioned, “When the court becomes a dictator, the situation could get worse than under a [military] dictatorship.” There is also a legal angle to this development. As per the Supreme Court verdict, Gilani ceased to be Prime Minister of Pakistan since 26 April. The legal validity of his decisions taken between 26 April and 19 June 2012 can be contested. Though the PPP led government enjoys majority in the Parliament, as reflected in the recent passing of the budget, the legal validity of decisions taken by Gilani as Prime Minister will remain an issue, and the opposition political parties may take advantage of this fragile situation, and even demand for rolling back of policies of Gilani during this period. It is the first instance in Pakistan’s political history that a serving Prime Minister has been dismissed by the Supreme Court of the country.

One interesting as well as perplexing thing that needs to be noticed is the silence on part of the Pakistani army. The Pakistani Army Chief, Ashraf Pervez Kayani, must be commended for maintaining a distance from the political turmoil involving civilian institutions. Unlike some of his predecessors, Kayani seems to be poised to let the civilian organs of the state sort out affairs on their own, without any intervention from the army. Also, the army, the most powerful body in Pakistan, is currently embroiled in conflicts with the largest donor of Pakistan, the USA over the use of US drones and killing of Pakistan soldiers and civilians. Especially after the killing of Al Qaeda leader, Osama bin Laden, in Pakistani city of Abbottabad in May last year the relations have started growing tense. Since last November, Pakistan has closed the transport route to Afghanistan for the US led NATO forces, which has further embroiled the relations. The army at present stage might be preoccupied over this issue; hence the recent political stalemate may not merit its attention. Besides, Pakistan is currently facing the growing menace of militancy, fundamentalism, coupled with the fragile economy and skyrocketing inflation. The situation might be murkier if the army intervenes in the political domain.

As the reports suggest the PPP will unlikely challenge the verdict of the Supreme Court and will appoint a successor to Gilani and continue in power till the next general election, scheduled to be held in early next year. The coalition government may find it easier to sacrifice Gilani instead of confronting the increasingly assertive judiciary. However, the trouble may further snowball if the Supreme Court follows the same course by ordering the new Prime Minister to open cases against Zardari, and write to the Swiss authorities in this context. While Zardari seems to be in a reconciliatory posture, the mind of Supreme Court particularly its Chief Justice is not yet known. In case of further confrontation, which Zardari will try his best to avoid, an early election in Pakistan may not be ruled out.