Memories riding the rails from Moscow to Brest 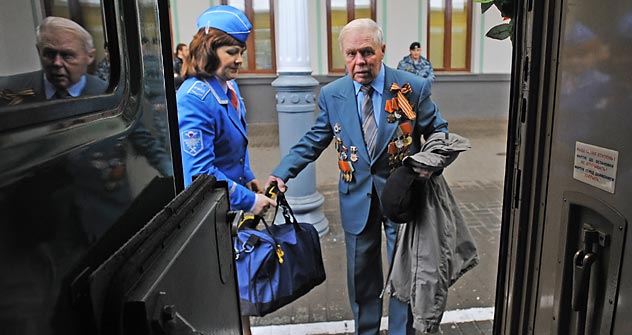 The Memory Train took the Moscow-Minsk-Brest-Moscow route to mark the 71st anniversary of the start of the Great Patriotic War.

The Memory Train departed from Moscow on 20 June, two days before the 71st anniversary of the outbreak of the Second World War. At the start of the journey, those travelling, including Belarusian veterans, laid flowers on Victory Square, visited the Great Patriotic War Museum, the Glory Mound and the Khatyn memorial complexes. They then watched the sunrise near the wall of the Brest Fortress and took part in a memorial ceremony.

The point of the initiative was to help war veterans meet the younger generations. Some teenagers have said history lessons alone cannot teach them about the war, nor about the experiences of those who took part. During the train journey it was hoped both veterans and young people would discuss what happened in the war together.

Children and teenagers benefited from listening to the veterans' stories from the war and the veterans were amused by the questions from the children such as: "were you afraid?" "How did you do what you did?"

The organisers of the Memory Train confessed they have conflicting emotions about the idea. On the one hand, they have noticed that more young Russians are interested in the war and that lots of children want to do this trip. However, on the other hand, every year there are fewer and fewer veterans and organisers say the war heroes are finding it more and more difficult to travel. Their average age is now 88 to 89 but Russian Railways provides them with a special carriage so they can travel more comfortably. So, therefore, in spite of age and health problems, they can still take part.

The Memory Train was started by the Moscow Public Relations Committee in 2004, in time for the 60th anniversary of the Great Patriotic War. The idea for the trip came from the veterans themselves and from children and youth organisations. Moscow had about 200 young persons' associations but these were eventually subsumed into a single movement called the Commonwealth - a Moscow children’s organisation. After the first trip, 8 years ago, the committee received lots of requests from children and war veterans asking for the event to be held annually.

Over the past 8 years, the Memory Train has visited nearly all the Hero Cities (cities named as such for their role during the Second World War.) These include Leningrad, Volgograd, Minsk, Smolensk, Novorossiyisk, Vyazma, Rzhev, Belgorod, Kursk, Krasnodon (the home town of the Young Guards) and even Berlin and Vienna. Even though many years have passed, people often want to see the streets they were on all those years ago and the memories are still important to them.

Wherever they go, they are given a traditional Russian welcome with a garmoshka (accordion playing). In Berlin, for example, people on the platform waved to the Soviet veterans. In Austria, people stopped and applauded when they saw them.

This year Minsk and Brest in Belarus were chosen because they were the first targets for attack during the Second World War. “We will die but we will not leave…” “There were three of us. It was tough but we did not surrender and we die as heroes”, say the inscriptions scribbled on the walls of the Brest Fortress.