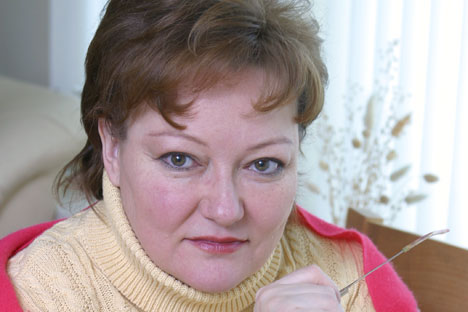 Olga Kryshtanovskaya, head of the Center for Elite Studies, explains why the protest movement is more appealing than the party of power.

Olga Kryshtanovskaya, head of the Center for Elite Studies at the Russian Academy of Sciences, believes that a revolution is brewing in Russia and it is crucial to study the opposition thoroughly. She spoke to Irina Novikova of Moskovskiye Novosti about the protest movement and why she left part of power United Russia.

Moskovskiye Novosti: You dressed down the modern political elite in your book “An Anatomy of the Russian Elite” published in 2005. Why did you join United Russia four years later?

Olga Kryshtanovskaya: First of all, I never criticized the system. As a sociologist, I recorded some things without ever assessing them. No one was aware of my political views. Why did I join the party? I was ready to see what sort of politician I would make. I’ll be honest with you: I had been thinking which party to choose. I had discussed this possibility with oppositionists – Grigory Yavlinsky and the Union of Right Forces (SPS), but they seemed somewhat uninterested. United Russia was quite interested in me, though. Besides, I had an academic interest in them – I had been studying elites, a most difficult community to reach, for more than 20 years. It was impossible to continue my research by standard methods.

MN: Why did you quit then?

O.K.: The feeling that a revolution was brewing in Russia became the main impetus. The things going on now are incredibly important and, as a scientist, I cannot miss out on them. What I see is that no one is studying these protests seriously. There is some sociological measuring, but it is not enough. A researcher cannot be told what to do, so I decided to withdraw from United Russia.

MN: Are you sorry you were ever part of it?

O.K.: Of course not. It was a valuable experience for a scientist. Society believes that there is a monopoly on power and that the party of power wins automatically. It came as a surprise to me that this is so far from the truth. I saw United Russia activists worry, curse, work their tails off and pass sleepless nights in order to ensure a victory in each region, at every level. So the opposition is totally wrong when it comes to this – there is no monopoly on power; there is only the residue of the authoritarian system. Most of Russia’s political class has an authoritarian way of thinking because of its experience. They are not accustomed to new democratic practices: when there is an alternative at an election, when you need to communicate with people, when officials’ incomes are transparent, and we can’t blame Putin; he is not the one making them act this way; he is incapable of changing this.

In this context, the political class is much stronger than its single leader. The leader is their mouthpiece; he depends on them. The rules by which an elite chooses its leader cannot be changed overnight. For instance, a restaurant owner allows his waiters to take tips. There is no such provision in the employment contract, it is just a gentlemen’s agreement – you can take tips if you want. This country has lived like this for centuries – all functionaries are like waiters, allowed to accept tips. Then, all of a sudden, the owner changes and there is a ban on taking tips, and those who continue to accept them are punished. But they are all used to taking them. The contract terms are amended. The leader who does this will immediately lose support.

When Medvedev led the campaign against corruption, he took a risk. The fragmentation of elites, a very dangerous phenomenon, started because Medvedev broke the arrangement of “we are loyal as long as you let us make money.” The best part of the elite failed to understand what sort of rules of the game they would have to abide by. Putin seems a better option, because he makes it clear how one should live under him. Elites also respect him because of his personnel policy. Unlike Yeltsin, Putin did not sack enormous numbers of people, who ended up in the opposition.

MN: So the opposition failed to evolve in the 2000s because no one was kicked out of the elites?

O.K.: This is partly true. I studied the elite turnover for many years and discovered a correlation between the rate of this turnover, the nature of dismissals and the power of the opposition. All of the old opposition leaders are people expelled from the elites.

MN: Medvedev never ousted anyone from the elite either, did he?

O.K.: During the first two years of their presidential terms, Putin renewed 24 percent of the elites, and Medvedev did the same for 38 percent. People remained in the key posts but there were tremendous changes in the regions. The average governor is now 18 years younger than he used to be. Never since Stalin’s time had there been such an effort to rejuvenate officialdom.

MN: Are there any new means of upward mobility?

O.K.: The Internet is a new one – it brought about a new network community with horizontal ties. This freedom zone catapulted some people to unbelievable heights. Twitter and blogs turned Konstantin Rykov, Robert Shlegel and Anton Korobkov into virtual spokesmen for the authorities, while Alexei Navalny became the leader of the opposition. He came up with an instrument to collect feedback. He told people: “send me everything you have about corruption” and made all those reports public. He was the pioneer and that was a flash of genius.

MN: Who do you think is the current leader of the opposition?

O.K.: It has no leaders, because there is no consolidated opposition. Communists have Gennady Zyuganov, and Internet communities have accounts rather than real people. No one can be sure whether Navalny writes his blog or not – it is his account that stirs the masses. Navalny might fall ill and some other people will take over using his nickname. He is an intellectual leader, not a physical one. Leaders are replaceable, because anyone can keep an account. It is a new reality. Even the opposition that is responsible for this does not seem to be aware of it. They are unaware of their elusiveness, their power; they don’t know how to manage them, just the way the authorities are unaware how to respond to this reality, because they still resort to old tried and tested methods – arrests, searches and criminal cases. The opposition can’t find any effective answer yet, but I suppose it is a matter of a couple of months.

MN: Could a new leader appear to consolidate the opposition?

O.K.: A force becomes effective once it focuses on something or someone specific. It could be a party or a single leader, but it could have an opposite effect. People sense this and say: “we have no leader,” thus accepting the rules of the game.

MN: What will happen to the protest movement?

Olga Viktorovna Kryshtanovskaya was born in Moscow in 1954. She graduated from the philosophy faculty of Moscow State University in 1979. She has headed the Center for Elite Studies at the Russian Academy of Sciences since 1989. Kryshtanovskaya is Professor Emeritus at the University of Glasgow; she holds a Ph.D. in sociology and specializes in elite studies. Kryshtanovskaya is the author of the book An Anatomy of the Russian Elite. She joined United Russia in 2009 and was Vladimir Putin’s authorized representative during the 2012 presidential election. She suspended her membership in the party on June 11, 2012.

O.K.: There are people who are dissatisfied with the systemic things – healthcare, education, pensions. This is social protest. There is also a politically minded mass taking part in rallies that consists of intellectuals. They are well-off and joined protests because these people can afford foreign trips and watch things there. They think that life is good there and bad here. These are not poor people, but free ones who travel a lot. There are also those who face social and economic problems. If the well-off activists from big cities succeed in winning over the social protesters, they will have millions of people in the streets; they will have a revolution. But there is still the old woman and her leaking ceiling, her sunken floor, her dying husband, and they are both war veterans and have no benefits, and her protest is not there to contribute to the 12 June rally in Moscow. They all appear to protest separately.

MN: What stops them from joining forces with other protest groups, at least in Moscow?

O.K.: Put that old woman trying to save every penny beside Boris Nemtsov of the opposition. Do they have anything in common? Besides, discontented old people are quite passive. Navalny is no one as long as Putin pays their pensions. These are people from different worlds and they speak different languages. New protest centers in the regions might help. The opposition should appeal to young people from lower-income social strata – that would be a clever move, to appeal to the grandson of that old woman with a leaking roof. You won’t kindle a granny but you will easily enlist young people from poor, small town families.