But Is it Art? 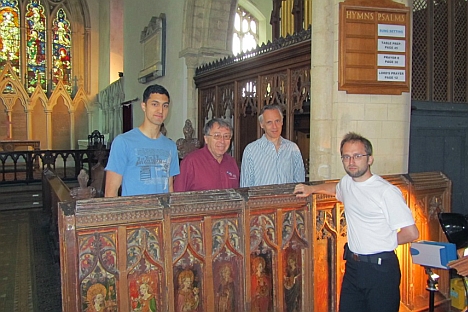 One man’s passion for physics and painting could bring an end to the world’s estimated $6 billion market for art forgeries.

Earlier this year Spike Bucklow of Cambridge’s Hamilton Kerr Institute led a small team of graduate students to a church in Norfolk where ancient paintings had been hidden in the early 15th century. When Henry VIII formed the Anglican Church following the Pope’s refusal to grant him a divorce from Catherine of Aragon, the paintings had been hidden by the parishoners determined to save them. Crafted under wooden benches inside the church, they remained undiscovered for centuries until a group of religious scholars had recently discovered church scriptures documenting the clandestine operation.

Bucklow could think of one man with the technology capable of painting an accurate description of the icons origins: Roman Maev. “He’s developed technologies that are novel in his field. Our question was whether there was value in looking at ancient paintings,” said Bucklow.

Maev, a Canadian-based physicist with Russian roots, helped create diagnostic imaging that can be used to discover and authentic ancient art as well as expose forgeries. “We were able to visualize the most intricate details of the icons, which had been lost to civilization for centuries,” Maev said.

He is currently focused on revolutionizing the world’s $40 billion art market, or, more precisely, the 15% of it that consists of forgeries. According to the FBI, $6 billion is spent annually for forget, misattributed or stolen art.

Maev is pursuing grants from leading European scientific funding organizations and engineering companies to build his lab. “Museums like mobile labs because they can keep their artwork in-house. We go there and analyze the paintings for authenticity and damage via chemical and various spectrum and imaging analysis.”

“There have been around 1300 Rembrandt paintings imported legally into the United States, but he only painted 400,” Maev explained in the bar of a glitzy downtown Moscow hotel, referring to the latest data from the Rembrandt Research Project. “That means over half the Rembrandts in America are forgeries, but most of the owners – including private collectors and museums – don’t want to know this. The implications for the art world are huge.”

“Applying techniques like acoustic microscopy and high resolution ultrasound imaging, which were previously only used in high tech aerospace and defense sectors, to render 3D images of paintings is allowing us to build mathematical models that accurately predict the decay of an ancient artwork,” he continued.  “Once we perfect this model, we’ll have a sort-of DNA that can be used to accurately determine whether a painting is a fake or not.”

“When I was a teenager I always loved art,” recalled Maev of his Moscow childhood. “But in the 1970s, just when I was choosing what to study in college, there was a famous Soviet movie that came out called Nine Days in One Year about a group of young physicists who save the world. That’s when I decided I wanted to be one of them.”

But the passion for art never wavered, even as Maev’s work took him permanently to Windsor, Canada amid a crumbling domestic science infrastructure in the 1990s. “I had a realization at one point, long after moving to Canada, that the work I had done in graduate school as a physicist, namely, analyzing glass, wood and practically any kind of solid, could be applied to the world of art,” he explained.

In 2007, Maev received a $200 thousand grant from the Canadian government, as well as another $50 thousand from Moscow’s Pushkin Museum (2010), for testing his idea. “We invited a top-notch restorers to our lab in Windsor to alter a painting and see if we could determine what he had changed,” he said. “Using various techniques including thermal reflectography, shortwave infrared imaging and air coupling ultrasound, we were able to find every single alteration, including the fake signature he had added.”

Maev then took his technology on the road, attending art conferences in places like Italy, England, Denmark, and Israel, and eventually found partners interested in determining if their collections were genuine. “We would sign confidentiality agreements with wealthy collectors. I would explain it to them simply: ‘I can’t tell you whether you own a real Rubens or not, but I can say with great accuracy whether the painting matches the time period, has any obvious signs of forgery and adheres to the author’s “signature” or chosen colors and materials present in all his work,’” explained Maev.

Eventually Maev’s method attracted the interest of Vienna’s newly opened Prince of Lichtenstein gallery. “Vienna has hundreds of galleries, and the owners wanted to prove that what they were offering was unique,” he said. Maev had just perfected a technique that allowed him to determine the geographical origins of an artwork. “They used to have these artists’ guilds in practically every European country that determined what kind of pigments and varnish were used in paintings. By analyzing this data, we can already determine the country were the painting was made. Taking it a step further, we should soon be able to pinpoint its origin to a single village.”

After patenting his technique in the United States and 15 other countries, Maev’s goal is to establish a mobile lab he could take anywhere in the world. “London is the undisputed art capital of the world – the best museums and auctions are all there,” he said.

“Many people don’t know that artists used to offer their services on a sliding scale,” he continued. “Namely, they would charge a certain price to draw a client’s face and have their students do the rest of the portrait. For a higher fee, they’d draw the entire body, and so on. Our technique allows museums to determine how much of their great paintings were actually drawn by the master artist.”

Ready for the Truth?

But Maev has his detractors. “I am a little skeptical about technical expertise,” explained James Butterwick, noted London collector and dealer. “I have seen so many of these attached to works of the Russian avant garde that are not only inaccurate, but positively criminal, that I have little faith. There is still nothing as good as certifiable provenance and exhibition history.”

“It’s dangerous to have too much faith in any one particular type of information,” Bucklow added.

“A lot of museums, especially smaller ones, just don’t want to know that parts of their collection are not authentic,” Maev explained. “Some of them paid large sums of money to acquire rare paintings that now attract crowds. Nobody will benefit from their being labeled as fake.”

In Russia, there is already an interest in analyzing the country’s leading artworks through Maev’s technique. “But at the Ministry of Culture they told me – this has to be done at a state level,” he grinned. There is serious concern that violence could ensue if wealthy collectors began to discover the real scale of forgery they were subjected to; and the backlash could come against Maev from the forgers themselves.

While Russia may not be ready to draw a final verdict, Maev is convinced that, properly implemented, his technology could achieve exactly that. “If we’re able to complete the mathematical model and finalize our understanding of a painting’s DNA, we’ll be way ahead of what the best forgers could come up with,” he contemplated. “At least for another generation of collectors.”