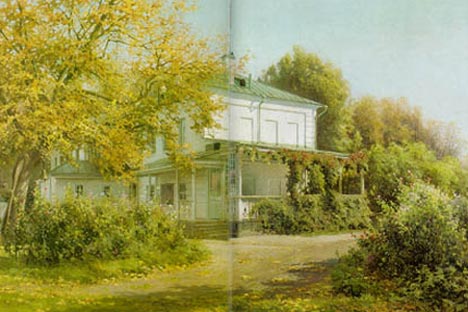 Yasnaya Polyana was the home of Russian writer and thinker Leo Tolstoy, where he was born and spent nearly 60 years of his life.

The Yasnaya Polyana country estate, which is situated several kilometers from Tula, is one of them.

Yasnaya Polyana was the home of Russian writer and thinker Leo Tolstoy, where he was born and spent nearly 60 years of his life. During the distribution of inheritance between the Tolstoy brothers in 1847 Leo Tolstoy inherited the Yasnaya Polyana estate and several villages. Soon afterwards he sold the villages and the more than 1,000-hectare Yasnaya Polyana estate became his only property. The spacious three-storey house with 32 rooms where Leo Tolstoy was born on August 28th 1828 was later demolished. Upon his return from St.Petersburg in 1856, Leo Tolstoy and his family had to occupy one of the two wings which had been built by his grandfather. As Tolstoy’s family became larger, the wing was extended to provide more room. Members of the Tolstoy family referred to the Yasnaya Polyana house as “the big house”. Leo Tolstoy wrote many of his novels at Yasnaya Polyana and the estate bore witness to all the twists and turns of his more than eventful life.

The largest room, “the parlor” as the Tolstoys used to call it in those days, has preserved the interior of the old mansion. Director of the Yasnaya Polyana Museum Yekaterina Tolstaya comments.

"Many heirlooms were passed on from generation to generation. Portraits, mahogany furniture, and the comfy old chairs from the old mansion – all moved together with the family. The writing desk which belonged to Leo Tolstoy’s father is now in the writer’s study. Tolstoy wrote his most significant works at this desk."

Leo Tolstoy preferred to do a large share of work around the house himself and was on good terms with peasants for whom he had infinite respect. Even in his younger years Tolstoy believed that the landlord owed a lot to his peasants. When he was 21, Tolstoy opened a school for peasant children in Yasnaya Polyana and often gave classes himself. The student-teacher relations were built on the basis of equality. Yekaterina Tolstaya comments.

"Tolstoy deemed the ABC book he wrote to be nearly the most important of all his works. While teaching high school, he practiced an individual approach. He knew what the kids’ interests were and read and discussed things with them. His classes were held in a friendly atmosphere so each pupil found them interesting and benefited from them."

In addition to “the big house”, the Yasnaya Polyana estate consists of a huge park with alleys and ponds. One of the most remote alleys has Leo Tolstoy’s favorite bench from which opens a marvelous view on the local landscape. The Tree of Love is another attraction. As the legend goes, if you go around the tree several times and wish for something, your wish will come true.