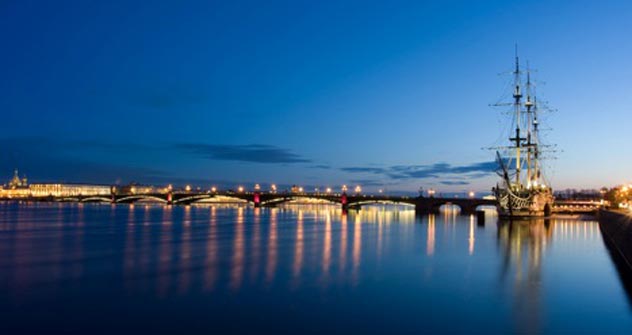 In this 2-part series, Ajay Kamalakaran goes local in the northern capital of St Petersburg.

Imagine living in a place with a long and particularly brutal winter, where the sun is considered a novelty for months on end. Ponder over the prospect of going to university or work in darkness and getting back home in the same conditions, when you cannot tell the difference between 8 am and 8 pm. As a resident of such a place, how would you react if there was another stretch when it stays relatively warm and it was bright well past midnight? St Petersburgers relish every single one of the long and glorious spring and summer nights when the city essentially becomes a bastion of perpetual daylight.

At a French cafe near the city’s main railway station, where trains come in from Moscow, two young men who look like they’ve been out all night drink large Americanos to get sober. It is 7:30 am in the opulent northern capital of Russia and the city is celebrating its birthday, a party that began the night before with a series of cultural programmes. As the last of the revellers go home, St Petersburg or Piter becomes a photographer’s dream. The streets are empty, the light is absolutely perfect and there is a surreal calm in the canal-side lanes, the main thoroughfare, Nevsky Avenue and the Neva riverfront.

Those enjoying the warm early-morning sun sip on Soviet champagne outside the Our Lady of Kazan Cathedral. It’s celebration time as the city turns 309. The warmth and the sun bring with it a kind of joviality and gentleness that is almost unbecoming of a large city. As we walked into a cafe in a smaller, a man in a suit rushes in and tells the lady at the counter to give us free pirozhkis (stuffed baked buns) since we were the first customers of the day! Would this happen in a million years in Moscow?

As the day gets warmer, the beach by the Neva is full of sunbathers eager to shed off a paleness that is the result of a long winter. The temperature of the water is around 7 or 8 degrees Celsius and a sign says “swimming forbidden” but that doesn’t stop a particular Indian from jumping and initiating himself into the city. After all, in Russia the best way to get someone to do something is to use the magical word запрещенный (zapreshchennyĭ) or forbidden. It is also forbidden to consume alcohol in a public place or even to jaywalk, but then all the jails in this beautiful city would be full of Russians and foreigners who waste no time in breaking these laws. Another favourite spot for the sunbathers is the Petropavlovsk Fortress, from where there is an equally stunning view of the Hermitage and the St Issac’s Cathedral.

It’s already too warm for most of the cafes and restaurants to serve warm borsh and it’s the colder version of the beet-root soup that you have to settle for. As the sun gets stronger, the St Petersburg faithful head towards the Alexander Garden, which has its fair share of fountains. The Peterhof, the magnificent summer palace is a no-go on a day when just about every tourist in northern Russia would be there. Many of the cruise-boats on the Neva have announcers speaking in French, German and English, a dead giveaway that this is not something that St Petersburgers do.

Although the phenomenon known as “White Nights” is brief, days with extended daylight go on deep into the summer.  It would be foolhardy to think that the warmer months are one long holiday for St Petersburgers. People suffer from sleep disorders in this season and it’s not hard to understand why when strong sunlight can pierce through a curtain at 5:30 in the morning making you feel like it’s 9 am. The inhabitants of Piter more than make up for the lack of sleep in the colder months.

The city has developed an unfair reputation as being the capital of hate-crimes in the country. Guidebooks warn “visible” foreigners to not walk alone in the streets at night or head out to the suburbs but St Petersburgers argue that their city has been unfairly targeted by the media. Mae Nae, an ethnic Korean friend of mine from far-away Sakhalin Island had a different point of view on the situation in the city. She said that the only trouble she had in the city in 8 years is from policemen who have made an art form of extorting money from people. An Indian medical student from Ranchi, who is in his final year in the city, told me that the skinheads aren’t a bunch of random drunks who go out on the streets and find a random non-Russian. He argued that they were disciplined “hired-hands” of local criminals who use them to settle business scores.

How do St Petersburgers celebrate the “White Nights?” We were lucky enough to be invited for a private concert in a quadrangle, close to the riverside. The festivities started after 10 pm and it was still bright enough for many people to keep their sunglasses on! This particular concert was held next to a building that is used as an art gallery and Dutch library. The best seats in the house weren’t right in front of the musicians but from the gallery up above. From this gallery, there was the option of listening to music while watching the Neva and the Petropavlovsk Fortress in the crimson post-midnight twilight.

An eerie kind of daylight was shining over the Blood of the Saviour Cathedral at 2 am. In the city’s many green patches, revellers enjoyed the soft light. “Welcome to Russia,” said a couple of happy revellers when they heard English being spoken and then went on to say “please don’t rob us” in Russian as they laughed and walked away. Off went some firecrackers even later just to show that the night was not over or maybe that the day begun. There were a few cafes open on Nevsky Avenue, perhaps the best place for a large Americano to start off a new day. We probably wouldn’t be spending the winter in the city, but there were enough opportunities to sleep elsewhere.