Putin, Kissinger can agree on Syria 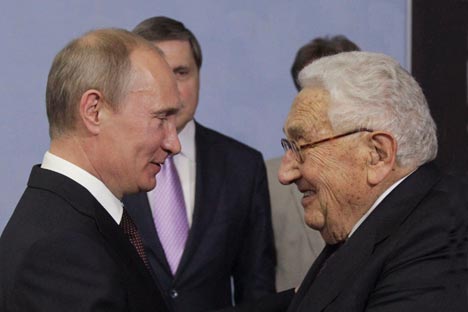 The point is, there is a remarkable proximity between the Russian position on Syria and Kissinger’s own opinion on the subject of the “Arab Spring”.

A long-awaited visitor to Russia met President Vladimir Putin on Thursday – former United States secretary of state Henry Kissinger. The venue was the St. Petersburg International Economic Forum (dubbed as “Russia’s Davos”). Energy is a key topic at the conference in St. Petersburg and the Kissinger Associates, Inc., as a consulting firm cannot miss such an important occasion to assist its clients in identifying strategic partners and investment opportunities.

Clearly, Russia is opening up its energy sector for foreign participation in an unprecedented way and Russia is one of the fastest growing economies in the world at present. (By the way, another participant at the St. Petersburg conference is He Guoqiang, senior member of the politburo of the Chinese communist party who heads the powerful Central Commission for Discipline Inspection.)

Kissinger was “long-awaited” as he hasn’t so far met Putin after the latter’s return to the Kremlin as president for a third term. The two statesmen have cultivated a friendly personal relationship over the years, which also seems to play a useful role in smoothening the rough edges of the Russian-American relationship. Kissinger, of course, has a very profound background of Soviet-American relations and could bring into the contemporary US thinking a great deal of realism.

The setting is also poignant. Putin’s foreign policy strategy has evolved over the years in a wide arc and suffice to say, at the core of it today it is bereft of any ideology or dogma and is instead an all-consuming ambition to make Russia strong. As a master tactician, he is constantly on the lookout for opportunities; and being a highly trained mind, challenges do not deter him. His preferred way of relentlessly promoting Russian interests and robustly defending them will be by essentially balancing among the big players in a polycentric world while Russia remains a strategically independent actor. He and Kissinger would have a lot in common.

Putin received Kissinger within days of his first meeting as president with his US counterpart Barack Obama on Monday on the sidelines of the G-20 summit meeting in Mexico. Putin would have already mulled over his extended 2-hour long conversation with Obama, which turned out to be, in the event, rather productive and fruitful – although lacking in the personal warmth that will elude the two statesmen for the foreseeable future.

Having said that, the differences over Syria continue and the situation in the country is approaching a showdown, which could have fallouts for US-Russia relations. Russia has a stake in Syria, as Professor Anatol Lieven pointed out earlier this week.

The joint statement by Putin and Obama after Tuesday’s meeting had the following to say on Syria:

“We agree to cooperate bilaterally and multilaterally to solve regional conflicts.  In order to stop the bloodshed in Syria, we call for an immediate cessation of all violence and express full support for the efforts of UN/League of Arab States Joint Special Envoy Kofi Annan, including moving forward on political transition to a democratic, pluralistic political system that would be implemented by the Syrians themselves in the framework of Syria's sovereignty, independence, unity, and territorial integrity.  We are united in the belief that the Syrian people should have the opportunity to independently and democratically choose their own future.”

The joint statement omitted any reference to the removal of Syrian president Bashar al-Assad, which has been a strident US demand. Later, at the joint press conference with Putin also, Obama avoided any reference to Assad. The relevant excerpts are:

“And finally, as Mr. President mentioned, we discussed Syria, where we agreed that we need to see a cessation of the violence, that a political process has to be created to prevent civil war, and the kind of horrific events that we’ve seen over the last several weeks, and we pledged to work with other international actors including the United Nations, Kofi Annan, and all the interested parties in trying to find a resolution to this problem.”

Indeed, Putin later underlined at a separate press conference that it is not for any foreign power to dictate to the Syrian nation what sort of government it should have. Putin repeated the consistent Russian position:

“We think that no one has the right to decide for other peoples who should come to power and who should be removed from power. Yes, we know that part of Syria’s people, those represented by the armed opposition, want to see President Assad leave. Firstly, they do not represent the entire Syrian people. Secondly, the most important thing is not simply changing the regime itself, but ensuring that if it does change – and this should be achieved through constitutional means only, the bloodshed will then stop and peace will return to the country.”

These nuances would suggest that there is still scope for purposive US-Russia consultations over Syria in the coming weeks. Rhetoric and public posturing apart, what matters is that in two important US statements on Wednesday regarding US-Russia ties, top officials studiously eschewed any outright demand for regime change in Syria – article by US secretary of state in Wall Street Journal on US-Russia relationship and the testimony by the US deputy secretary of state William Burns on the imperative of doing away with the cold-war era Jackson-Vanik legislation. Clinton, in fact, is heading for Russia next week.

Enter Kissinger. Significantly, at yesterday’s meeting in St. Petersburg between Putin and Kissinger, there was also a third participant – former Russian prime minister and foreign minister Yevgeny Primakov, who happens to be Russia’s iconic ‘Arabist’. It is likely that Middle Eastern questions figured in Putin’s conversation with Kissinger.

The point is, there is a remarkable proximity between the Russian position on Syria and Kissinger’s own opinion on the subject of the “Arab Spring”. As a lengthy essay by Lavrov in the Huffington Post last weekend titled “On the Right Side of History” underscores, there is a far-reaching geopolitical dimension to the Syrian crisis that goes well beyond the US’ current objective of bringing about a regime change in Damascus with a view to deprive Tehran of its key regional ally and to “isolate” it in its region.

That dimension, which perturbs Russia, is not limited to the Syrian question alone but happens to be taking a particularly acute form in Syria as recent developments testify – namely, rise of radical Islamism. It is a spectre that haunts Russia, which is also, in a manner of speaking, a part of the “Islamic world”. Moscow has genuine threat perceptions from the radicalization of the Muslim world. Aside the fallouts of the radicalization on North Caucasus, the pan-Islamic sentiments that are being whipped up also threaten the stability of Central Asia, given the high probability that sooner rather than later, the Arab Spring may appear on the steppes.

Where there is potential meeting point between Kissinger’s thinking and the Russian concerns lies in the following, as he recently wrote: “Regime change, almost by definition, generates an imperative for nation-building. Failing that, the international order itself begins to disintegrate. Blank spaces denoting lawlessness may come to dominate the map, as has already occurred in Yemen, Somalia, northern Mali, Libya and northwestern Pakistan, and may yet happen in Syria.  The collapse of the state may turn its territory into a base for terrorism or arms supply against neighbors who, in the absence of any central authority, will have no means to counteract them.”

Kissinger shares Russia’s apprehensions on this score albeit his emphasis is on realpolitik ensuing from the “diplomacy generated by the Arab Spring” replacing the Westphalian principles of equilibrium in the contemporary world order – principles which have been riveted on the canon that states built on national and cultural units are deemed sovereign within their borders and international politics will be confined to their interaction across established boundaries.

“Don’t ask for whom the bell tolls…”

India, too, has stakes in what happens in Syria and the convergence of interests with Russia is at once self-evident. The growing dominance of the Salafist narrative and the Saudi-Qatari-Salafist project in the Middle East is something that India can overlook at great peril. The danger of traditional Islam being displaced by the culture of Salafism is real for India, too. In the Malabar Coast of south-western India, this is already a palpable danger.

As the well-known scholar on the Middle East, Alaister Crooke summed up in a brilliant essay recently, “A huge cultural and political shift is under way: the “Salafisation” of traditional Sunni Islam: the sheering-away of traditional Islam from heterogeneity, and its old established co-habitation with other sects and ethnicities. It is a narrowing-down, an introversion into a more rigid clutching to the certainties of right and wrong, and to the imposition of these “truths” on society.”

The motivation for the Gulf states to steer the Arab Spring in such a way as to reassert their regional leadership and to “re-legitimise” their oligarchies is plain to see, but what matters is what is there in it for India if Salafism of the Saudi and Qatari variety gets fired up in our extended neighbourhood. To quote Crooke, “No wonder Russia is concerned: Central Asia is unlikely to prove immune either. Its leaders do recall, only too well, the impact on Russia’s backyard, of that earlier “stirring” associated with Afghanistan.” It is difficult to understand how India can afford to look aside.