“Service with a smile” – A British view on Russian bureaucracy 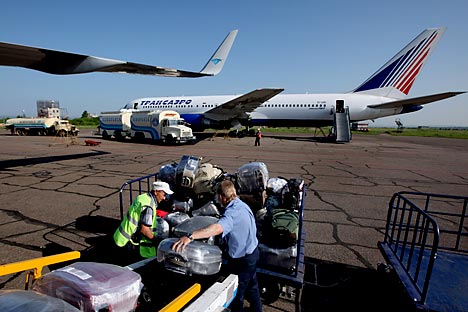 The Russians are a nation of queue jumpers, something that the Englishman in me will never accept. I used suffer in silence, inwardly fuming but remaining outwardly impassive. However, on my recent return from London I decided that it was time to take a stand.

A rather plump man sidled up next to me and then tried to use his protruding stomach as leverage, slowly but surely inching it in front of me. Since he had about half a foot more stomach than me, he could stand physically level with me but begin bumping me out of the way with subtle diagonal movements.

“Err excuse me” I said, indicating that he was standing in my way.
“Что?” He said, giving me another quick barge with his belly.
“Can you please move” I repeated firmly, indicating that I was going in front of him.

He stared at me blankly, but he knew the game was up and his attempts were only cursory after that. He looked mournfully over to the parallel queue where there was a group of two Americans and two New Zealanders politely making way for the Russians.

So I made it through customs in excellent time, and began congratulating myself as I stood at the baggage carousel. Half an hour later I was still there. The spirit of congratulation was dampened somewhat when the last Russian smugly grabbed their bags and left, and completely died when even the Americans had come through and taken their stuff.

I clung to the faint hope that my bright red suitcase was about to make its triumphant entrance and I’d be able to go home hassle-free until the message proclaiming the arrival of “last luggage” vanished from the screen and was replaced by another flight number.

Finally I had to face facts, for the 2nd time in 4 trips to Russia they’d lost my luggage. So I dusted off my Russian and approached the nearest staff member who was incredibly helpful and polite, and deeply apologetic that she really couldn’t care less about my situation.

Thus began my first experience of the famous Russian service culture. Bear in mind that this was 2.5 weeks ago when I was still an enthusiastic immigrant who smiled in public and indeed believed that a friendly smile would make everyone’s day go a bit more pleasantly. At that time I was still wounded by sighs and frowns, and naively thought that someone whose job it was to help me might actually be prepared to do so.

I did eventually manage to fill out some paperwork and was instructed to return the next day to the same office.

I presented myself as requested, to blank stares and a somewhat dismissive attitude.
“Maybe your bags are outside our office” one of them said eventually.

There were indeed several heaps of bags outside their office, which seemed to me an excellent and very safe place to store them. I gave them a thorough inspection, resisted the temptation to pick a suitcase at random, and eventually went back into the office to demand some more help.

The woman made a few phone calls and came off them looking even more moody, obviously believing it was my fault they couldn’t find the bags that they’d lost.

“Go to the other office” she said eventually.

“Over there” she said, pointing in the vague direction of customs.

After wandering round the baggage reclaim department for a while I eventually found what I presumed to be ‘the other’ office, which was stacked full of more bags, surely a promising sign. It was populated by two women who were scrawling information into massive ledgers, which they occasionally passed on to a man who then cross-referenced the information with a third, even bigger ledger.

“Wait outside” one of them barked at me, annoyed that I’d crossed the threshold uninvited.

I sat and waited like the patient Englishman I was in those days, eyeing up the nearest carousel where a solitary man surveyed the belt for his bags.

Eventually the woman came out and beckoned me inside, mumbling something along the lines of “what do you want?”
“My bags didn’t arrive yesterday, I was told to come today” I said.

She eyed me suspiciously, and demanded my paperwork which I duly handed over. She inspected it with the kind of irritability only shown by people who love ledgers and hate to be taken away from the crucial work of filling them in.

However, she cheered up immensely when she cross-referenced my paperwork and realized that this was new information, on three separate pieces of paper. This was sure to be a meaty entry in the ledger. I could sense her making a mental note to lose more foreigners’ bags, as the paperwork was so much more satisfying.

When she had eventually finished her scribblings, she summoned a friendly grimace and offered me the solution I’d been waiting for:
“Go to the other office”
“The same office? Or a different other office?” I asked, resigned to the fact that I was heading to my first day at work wearing my trusted purple hoodie and jeans.

I hadn’t seen any other offices in my previous tour of the baggage reclaim department, but it turned out I had overlooked a door which led literally into the walls. At Domodedovo airport the wall between arrivals and baggage reclaim is hollow, and is stuffed full of suitcases.

After about 25 minutes searching I finally found my bags, finally spying my red suitcase among the sea of black and grey. They were inside massive plastic bags, and I wasn’t allowed to take them out, so I had to drag them across the floor, which definitely brought me some strange looks from the general public.

I tried to go through customs but was directed back to a fourth office, hiding round the corner from the main baggage reclaim area. Here my paperwork was inspected once again and I was finally allowed to rip open the plastic bags, extract my luggage and head off through customs.

As I left I glanced over to one of the carousels, where the same man mournfully stood in front of a now empty belt, completely oblivious to the message which had just flashed up on the screen above him; “last luggage.” And so the cycle of life continues.