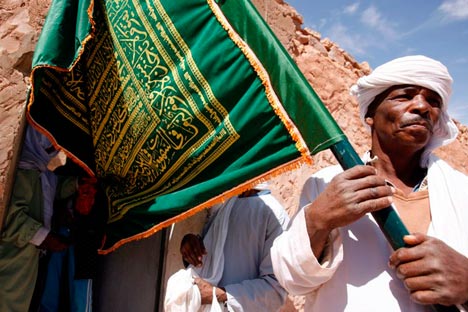 Kashmir is one of the places in Indian subcontinent in which one can come across a number of Sufi shrines, which stand as pillars of love, peace and harmony. Unfortunately Kashmir is known for conflict, while it should be known for what is famously locally referred Kashmiriyat.

On 25 June 2012, the 200-year old famous Dastageer Sahib Sufi shrine of Khanyar, Kashmir was gutted in fire. With this fire also revived old and not so old memories of communal strife, militancy, stone pelting, and heavy police presence in Kashmir valley. The shrine, named after 11th Century Sufi Saint named Syed Abdul Qadir Jeelani, who also bore a Hindu name Kahnoow (or Kanhu, the name of Lord Vishnu belonging to supreme Hindu trinity – Brahma, Vishnu and Maheshwar). The saint preached the message of love, brotherhood and non-violence, and was equally revered by Hindus and Muslims. This architectural marvel, mostly made of wood, was suddenly engulfed in a morning fire, while the devotees and bystanders were shrieking in fear for losing this shrine of peace and harmony, while the fire-fighters were tending fire amidst stone pelting by the angry mob. The police reportedly resorted to firing into air to disperse the angry crowed and to restore normalcy to the place.

It is not yet clear whether the fire incident was a deliberate act of sabotage by vested interests including militants to ignite the communal and militant fire, or it is just a mishap, but the incident brings memory back to another incident happened in 1995. In this year, the Charar-i-Sharif incident happened. It was the height of militancy, during which the whole Kashmir valley was on every day rage due to fighting between militants and security forces, and also by other acts of violence. The Charar-i-Sharif town, which also harboured shrine of one of the most famous Sufi Saint Nuruddin (also called by a Hindu name Nund Rishi, and was equally revered by Hindus and Muslims), was almost destroyed due to the fighting between the security forces and militants (the town and also the shrine was almost besieged by the militants led by one Master Gul). In long hours of battle most of the town was destroyed and some houses were gutted in fire. While the parallels between Charar-i-Sharif and Khanyar may not be that straightforward, but it may not be illogical to contextualise the past in the light of present developments as both the Saints were symbols of peace and religious harmony, and any decline in this culture of peace and harmony, which the detractors of peace would love to promote, may foster violence and reignite the militant passion.

Also the fire incident accompanied by stone pelting brings back to memory the incidents of stone pelting in the years 2008 to 2010. In fact the Kashmiri violence had never in its history stone pelting as a tool to express alienation and frustration, it was only a recent development. It was mainly inspired by Palestinian intifada as the Palestinian youth resort to this tactics massively to express their frustration. Perhaps the main idea behind the stone pelting, mainly resorted by the youth but guided under the direction of some clever strategists and leaders, was to display to the world alienation of the Kashmiri people, particularly of that of the valley but not in a violent manner as in past. The strategy might be: the youth, motivated by radicalism, throwing stones may be an accepted tactic as they are motivated by raw passion and dynamic energy, which can be further used to the cause of militant struggle. The stone pelting incident while firemen were trying to douse fire, which engulfed the structure rapidly as it is made of wood, revives back this recent memory of possible revival of this strategy by some of the local leaders with blessings from top leaders in the region. There may be a genuine reason behind this frustration because there is a possibility that the firemen reached the spot late despite repeated calls, but the incident of stone pelting may not be totally detached from the recent history of violence in Kashmir, in which stone pelting was used heavily.

Kashmir is one of the places in Indian subcontinent in which one can come across a number of Sufi shrines, which stand as pillars of love, peace and harmony. Unfortunately Kashmir is known for conflict, while it should be known for what is famously locally referred Kashmiriyat. It means the spirit of Kashmir is primarily embodied in the ethos of diversity, multiplicity and harmony, and in its very core it rejects all kinds of fundamentalism and dogmatism. The Sufi Saints transcended narrow confines of sect or even religion, and were revered irrespective of religions. They were respectfully called in different names as per suitability of a particular religion. Hence, the same person was called Nuruddin by Muslims, and Nund Rishi by Hindus. The same person was called Syed Abdul Qadir Jeelani or Ghaus-ul-Azam by Muslims, and Kahnoow by Hindus. The erosion of this syncretic culture of Kashmir has certainly aided separatism and emboldened the militancy. It is really a cyclic process: militancy has threatened this harmonious culture and in return been further emboldened by the decline of this culture. The destruction of the Shrine by fire may also be used by the militants as a ploy to further their strategy and target this harmonious culture of the religion by indulging in violent activities. Fortunately, the relics of the Saint reportedly have been rescued without damage, and that is definitely a breather for the followers of the Saint as well as advocates of peace and harmony. The authorities must take immediate steps to restore the Shrine in speediest possible manner, and that in fact would take much of sheen out of militancy in the region.

Kashmir also known as paradise on earth and Switzerland of the East has recently witnessed a period of thaw due to relatively peaceful atmosphere in the region primarily owing to working India-Pakistan relations, and also to increasingly popular belief in peaceful methods of conflict resolution. However, as earlier, there are also violent elements which seek to turn every incident into their favour as thy search for trouble making in every situation. One can hope that the incidents like the recent fire at the Dastageer Sahib will further unite the local people in restoring the place to its original pride, than to actually tarnish its image and revive violence.