The Voice of Russia
Sergey Misersky 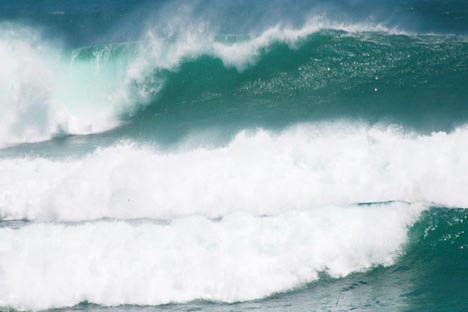 The World Ocean is a real treasure of natural resources, first and foremost fish. Fishing is one of the most profitable businesses, its annual turnover is approximately $60bn.

The World Ocean is a real treasure of natural resources, first and foremost fish. Fishing is one of the most profitable businesses, its annual turnover is approximately $60bn. The annual catch grows continuously and now has reached the critical volume of 100mln tons. With the expected increase to 120mln tons, half of the World Ocean’s biological resources could become extinct, Director of the Pacific Centre of Strategic Development Mikhail Tersky says.

“All coastal countries including Russia are planning to raise the fish catch. If these plans become reality we’ll be catching 150mln tons of fish a year by 2020. Experts say that this is a catastrophe.”

Scientists are convinced that there is no alternative to the rational use of biological resources and international agreements to curtail the takings. The Vladivostok summit is an excellent opportunity for solving global environmental problems, Deputy Director of the Institute of the Far East at the Russian Academy of Sciences Sergey Luzianin believes.

Issues of preservation and rational use of World Ocean’s biological resources will be in the focus of the APEC summit which is due to be held in Vladivostok between the 1st and 8th of September.

“Obviously, the leaders of 21 APEC member-states will have to try and find a compromise between economic requirements and the need to protect the World Ocean. In any case, Russia should prove its big role in the development of the ‘green’ economy ideas.”

Another acute problem in the protection of the World Ocean is poaching. According to different estimates, illegal takings make up to 30% of fish caught around the world. In particular, poachers illegally catch fish, crab and other sea products in Russia’s territorial waters to sell them to neighbouring countries. Our eastern neighbours do not care how the Kamchatka crab reaches their ports and whether the ship has the necessary papers. The most important factor is the low price. However, the life of Far Eastern poachers is soon going to become complicated. According to Alexander Glubokov from the Fishing and Ocean Research Centre, an agreement on the exchange of information about all ships carrying crab and other sea products aboard becomes effective at the end of June. This will destroy the illegal deliveries of the Kamchatka crab to South Korea. The Russian authorities hope that Japan, the USA, China and other countries will join the agreement at the Vladivostok summit. In this case, those countries will have to provide Russian border troops with information about poachers. In turn, Russia will be doing the same.