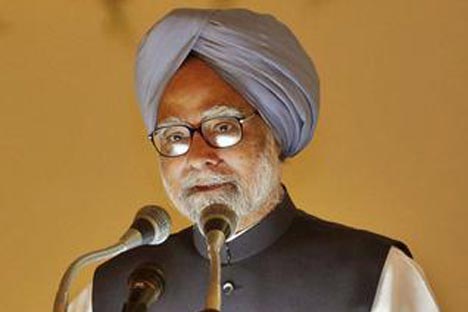 Reform is in the air, no doubt. Prime Minister Manmohan Singh has publicly vowed to revive India’s growth story within this fiscal year. More important, he has stressed the imperatives of reform with a rare confidence in his demeanor and voice. What explains the government’s newfound confidence?

When just about everyone concluded – in India and abroad – that the Indian government was done with reforms till the next parliamentary elections slated for early 2014 and that the priority henceforth would be on populist measures that could attract mass attention and won votes, there are stirrings in the air suggestive of a contrarian course. India is set to resume its reform path. This is possible because Indian politics is taking a dramatic turn and alongside the locus of power is getting realigned.

The government may revive the measure opening up retail trade to foreign companies such as Wal Mart. In a trail of controversy last December, the government had to mothball the reform to give foreign players access to India’s $450 billion retail trade market.

The prevailing view in Delhi has been that the coalition government simply lacked the political clout to muster majority support in the parliament to carry through the reform in the retail sector. Symbolically and substantially, the opening up of the retail sector to foreign players became a veritable litmus test of the government’s grit and capacity to navigate big time reforms. Thus, the renewed talk of the government reviving the proposal in itself conveys a strong political signal.

On Monday, the government announced a $5 billion increase in the foreign investment cap for government bonds; relaxation of restrictions on how long foreign investors ought to mandatorily hold government bonds; opening of investment in debt securities to more types of foreign buyers; inclusion of sovereign wealth funds, central banks, pension funds and insurers to the list of eligible buyers, etc. Again, the minimum holding period for foreign investors in some long-term infrastructure bonds have been reduced to one year from three years.

Reform is in the air, no doubt. Prime Minister Manmohan Singh has publicly vowed to revive India’s growth story within this fiscal year. More important, he has stressed the imperatives of reform with a rare confidence in his demeanor and voice. What explains the government’s newfound confidence?

The answer lies in the significant realignment that took place in the recent days and weeks in Indian politics, necessitated by the presidential election due on July 19. The United Progressive Alliance [UPA] coalition led by the Congress Party had to get its act together to ensure that its nominee, Pranab Mukherjee (who is the finance minister) becomes the next president of India. The widely held belief is that the incumbent president would have a major role to play in the post-2014 political scenario although he is deemed as the constitutional head of state and not an “executive” president.

And in the hectic political maneuverings that went on for the past few weeks, overtly and covertly, the leadership of the ruling Congress party led by Sonia Gandhi did brilliantly well to re-establish its control of the power dynamic within the UPA. Sonia Gandhi herself has reasserted her leadership of the UPA. The narrative has transformed in Indian politics.

By getting the Samajwadi Party, which rules the crucial state of Uttar Pradesh (which is the biggest state in India with a population touching 200 million – as big as Brazil) on its side, Congress has not only ensured beyond any doubt Mukherjee’s victory in the July 19 election but also called the bluff of those bickering UPA allies who were nitpicking in the recent period by blocking the reform agenda and making Dr. Singh’s leadership look weak and his government appear disoriented – at times even jeopardizing the stability of the government.

It is entirely conceivable that Congress might work out – or might already have begun working out – a more durable “private” alliance of its own with the Samajwadi Party [SP] on the side, whereby the latter will be supportive of the government although not yet a constituent of the UPA. No doubt, it is a marriage of convenience by two political parties that are ruthlessly adept at the game of brinkmanship and abject surrender and deal making and compromise. This curious political underpinning worked out on the backstage between the Congress and Samajwadi Party leaderships (details of which keeps the country guessing) alone has overnight changed the alchemy of the UPA coalition politics.

Congress’ “message” to its UPA allies is that none of them is indispensible if the push comes to the shove and they should, therefore, fall in line realizing what is in their best interests – partake of the vast patronage system thanks to being part of the ruling coalition or sit and sulk in political wilderness on the forlorn opposition benches. It is a tough message, which the Congress’ UPA “allies” are surely getting.

Looking ahead, the SP is expected to win handsomely in the 2014 elections, possibly securing something like 50 parliamentary constituencies and the Congress leadership weighs in that its axis, based on mutual interests, with the powerful regional party that is riding an unprecedented wave of popularity in Uttar Pradesh could have far-reaching significance for national politics in the coming years.

Summer of the Patriarch

Meanwhile, Mukherjee’s exit from the government today following his nomination as UPA’s presidential candidate also gives a free hand to the prime minister to run the finance ministry pretty much as he wants through the coming months until such time as Dr. Singh decides to have a new finance minister.

Contrary to the riveting yarns in the past few weeks circulating in the Indian capital that it was a UPA ally from West Bengal forced Sonia Gandhi’s hands to pick Mukherjee as her party’s nominee, the fact remains that she has nothing to fear from Mukherjee who is already visualizing himself as the patriarch of the Indian nation, which often resembles an extended joint Hindu family. Although Mukherjee will henceforth be duty-bound to pride himself as being above party politics, the fact remains that he has also been a flag carrier of the Congress Party for over 4 decades and through much of this time he held key positions in the government. Now as he walks toward the sunset of his active political life, there is no reason on earth for him to settle scores with the party’s current (or future) leadership for any perceived “injustice” done to him in a remote past.

The lay of the political land came into view when it transpired that Mukherjee’s last “political act” in the government as Monday drew to a close was a 90-minute one-on-one with Rahul Gandhi, who is widely tipped to lead the next Congress government. Mukherjee, in short, can be expected to lend a hand as the elder statesman as and when Rahul Gandhi assumes the reins of power. Conceivably, as a highly emotional personality, the role as the eminence grise of the Indian political arena (although not an active politician anymore) at a defining moment of transition in India’s political history that Mukherjee would also like to be seen and known and remembered eventually as he takes his place in the pantheon of national leaders.

Thus, all in all, Sonia Gandhi is actually giving a free hand to Dr. Singh through the critical period of the next couple of years so that he acquits himself as running an efficient and purposive government, which could, in turn, be projected as Congress’ best argument to seek a fresh mandate in the 2014 election.

The Congress’s calculation is that if it succeeds in reviving the growth story – Dr. Singh expects the growth rate to touch 7% within the current year itself, no matter the likelihood of a global recession – the party will attract the middle class support in the 2014 election, which could prove decisive in the party’s performance in urban India, while through select populist measures it keeps cultivating the poor people and the Muslim minority community.

Congress gains indirectly also from the disarray within the main rival Bharatiya Janata Party [BJP], which has suffered huge erosion in its traditional middle class support base in the recent years.

On the other hand, once the BJP vacates its legitimate role as a rightist conservative party and instead takes to a sectarian hardline “Hindutva” platform (which seems happening), Congress could hope to further benefit electorally from the ensuing polarization in Indian politics among the “secular” forces.

In sum, the dramatic shift in the political undercurrents can be noted in two main directions. One, Mukherjee’s exit will strengthen Dr. Singh’s position politically. Dr. Singh, arguably, has never before had such a towering presence in the government in all these past 8 years of his stewardship as prime minister.

Two, the process of intense politicking over Mukherjee’s election as president has worked to the all-round advantage of the Congress. To be sure, Congress has shown that it is head and shoulders above any other political party in India in its mastery of the art of managing coalition politics. The “widest acceptance” that Mukherjee is securing as the Congress’ presidential candidate – ranging from the progressive Left to the chauvinistic regional party of Shiv Sena in western India – eloquently testifies to it.

With a government that is seen to be functioning again after the drift of the past year or so with an accelerating reform program in the pipeline, and a vastly experienced president who can be expected to play a benevolent role as Congress prepares for the long-awaited generational shift in its leadership, Sonia Gandhi would be looking ahead at the 2014 election with renewed hope.