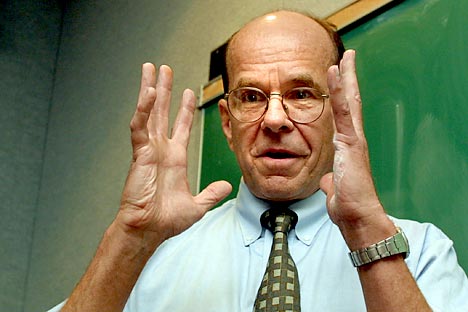 Barry Sharpless, winner of the Nobel Prize for Chemistry in 2001, is opening a lab at the Severny biopharmaceutical cluster on the campus of the Moscow Institute of Physics and Technology.

Sharpless is confident that important discoveries will not be long coming for him and his Russian colleagues. In a recent interview with Expert Magazine, Sharpless discusses current trends in global science and explains his motivations for opening a laboratory in Russia.

Expert Magazine: What first attracted you to chemistry?  I remember many people hated it at school.

Barry Sharpless: If you had started with organic chemistry then you would have liked it. Honestly speaking, Chemistry certainly wasn’t my favorite subject to begin with, because the syllabus starts with boring tables and diagrams describing various reactions. But there were three things that caught my interest. The first was the magic of photography, the amazing moment when a picture emerges on a bit of paper in the dark room. Secondly, just like all little boys, I liked loud bangs and flashes. And finally I liked the smells, I found this the most intriguing and fascinating thing about chemical reactions.

EM: How did you make your discoveries? Could you give us a dummy’s guide to winning a Nobel Prize and making scientific breakthroughs?

B.S: Are you joking? There is no magic formula. Genuine discoveries can never be planned. Politicians, presidents, and managers all believe they can forecast and predict what will happen.  They spend a lot of money on this, occasionally funding science projects to this end. But predictability can often be an illusion, especially in science. If a scientist is made to work on something that was planned two years in advance, he’ll never make any discoveries. In my view, if you have an idea and you know you can do it then this project is not worth the effort: What’s the point if you already know the end result? This is actually more or less what Einstein meant when he said “if the idea doesn’t seem absurd from the start then it is hopeless.

It’s a good feeling when you believe you’re on the brink of a scientific breakthrough, and this is exactly what will lead you on to make a discovery. A scientist needs to feel like someone forging a trail through an unexplored jungle. He can sense there is something interesting out there in front of him and his curiosity leads him onwards, but he is surrounded by uncertainty and maybe even danger. A scientist is not one to shy away from the unknown, he has to be brave, take risks and push the boundaries. These characteristics are what drive a scientist on to do great things.

E.M: You recently agreed to open a laboratory at the Severny biopharmaceutical cluster on the campus of the Moscow Institute of Physics and Technology. What was behind this decision?

B.S: When I visited KhimRar, one of the organisers of the Severny cluster, I was impressed by the scale of the work taking place there. The Compound Library, which is full of compounds that you can touch and smell, really inspired me, and I thought we could definitely something with these compounds.

E.M: Coat them with sugar and other functional matter?

B.S: In a sense. There are masses of compounds and medicines that have already become well-known thanks to billions of dollars of investment. We can chemically transform them, put them in another chemical package. I don’t mean changing the sweet packets they come in, that would be sacrilege! In their new form the molecules start to behave differently.

E.M: From aspirin to a cure for AIDS?

Yes and what of it? Or from a contraceptive pill to an anti-depressant. I can guarantee that by using quick chemistry we will be able to make amazing new molecules out of the thousands of well-known compounds.

E.M: Does this mean that Ferdinand Magellan didn’t necessarily discover new lands, he may have just seen something new, something everyone else had missed?

B.S: Oh yes, I really like the comparison with Magellan or Cook, or with any explorer. I have always tried to emulate them. Be the first to land and get a feel for things. The explorers were always followed by guys with spades who would dig around and blow stuff up. They can go ahead and blow stuff up, I will have moved on. It is possible that some of these places have already been explored, it’s just that no-one saw the pearls. As the explorer/discoverer I want to find a new use for these stones, plants, compounds, medicines – I want to see them from a new perspective.

E.M: Why is Russia the place to do this?

B.S: In some ways I also feel like a discoverer here. It is interesting to work with companies like KhimRar because there is a good basis of fundamental science. At the Moscow Institute of Physics and Technology there are students who are starting to study in a new and innovative way, merging physics, chemistry, and biology. This is very important. The other good thing is that we don’t need to overcome stereotypes because pharmaceutical science has hardly developed in this country over the past ten years. We are free.

E.M: Is this going to be a virtual lab or a real, hands-on one?

B.S: At its present stage I suppose it could be called a virtual lab, but eventually it will be a real one. Russian specialists will be working here along with scientists from the US; there is going to be a constant flow of people, and of course these days it is quite easy to communicate between the continents. I would like to think that, judging by our successes with click chemistry, a new breed of science is going to flourish in Russia. And the resulting discoveries will be just as significant as the ones Magellan made back in the 16th Century.

The interview is abridged abd first published in the Expert  magazine.