The Voice of Russia
Olga Zakutnyaya 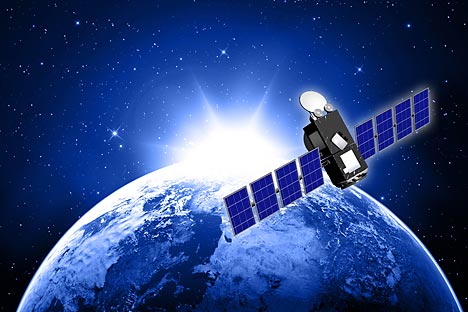 Russian orbital radio telescope RadioAstron has detected the first K-band (1.3 cm wavelength) fringes from a compact quasar. Thus, the telescope has successfully passed in-orbit testing of its interferometric mode, which started in mid-November 2011, and is ready for observations. The space observatory, the first one in the Spektr series, is to be followed by X-ray and ultraviolet spacecraft.

RadioAstron (or “Spektr-R”) which launched in June 2011 has successfully completed its in-orbit testing, together with running its early scientific program which has started in February 2012. The main idea of the testing was to perform simultaneous measurements with several ground-based observatories in the same wavelengths. The key point is that radio observations are more effective when there are two instruments detecting radio signals from the same object. This means that the larger the distance between the two instruments, the greater the overall sensitivity. This method is known as “very long baseline interferometry” (VLBI for short), since the distance between the instruments is the baseline of the interferometer.

While the distance between the two Earth-based observatories is limited by the curvature of the Earth, space observatories allow far greater scope. RadioAstron is the first instrument to bring space interferometry to reality. Its orbit takes it as far from the Earth as the Moon (approximately 330–360 thousand km). The observatory operates in four different bands, and its in-orbit testing included single as well as simultaneous observations with Earth-based facilities (via interferometry) in all available wavelengths in search for so-called “fringes”.

The term “fringe” refers to a correlation between two signals detected by two observatories, which means that they can work together via interferometry. The last fringe was found together with Effelsberg radio observatory (Germany) from the compact quasar 2013+370 (quasars are very distant and very energetic objects, presumably galactic nuclei containing super massive black holes in their centers). 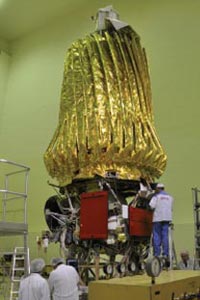 The tests of the earth-to-space Spektr-R/RadioAstron by russian scientists.
Source: Roscosmos

Earlier fringes were found on three other bands with observatories from the US, Europe, and Ukraine. These tests have demonstrated the high stability of RadioAstron’s interferometer space element.

Following successful completion of the tests came a special meeting of the RadioAstron International Space Council, which started on June 18, 2012. While the observatory has already begun its scientific program early, it is time to estimate its capabilities and refine future plans. International collaboration on the project includes facilities in the US, Europe, Ukraine, Australia, and Japan. Later in 2012 a call for proposals for the science program is expected.

Good news from the observatory stirs hope for next launches of the Spektr series. Spektr-R project is first, to be followed by Spektr-RG (an X-ray space observatory comprising German and Russian telescopes for an all-sky survey) and Spektr-UV (World Space Observatory-Ultraviolet — WSO-UV, an instrument to operate in the ultraviolet band). All three of them are developments by the Lavochkin design bureau, with three different head organizations dealing with the science payload: RadioAstron is operated by AstroSpace Center of the Lebedev Institute for Physics; Spektr-RG is developed jointly by the Space Research Institute and the German Max-Planck Institute for Extraterrestrial Physics; and WSO-UV is an international collaboration under the aegis of the Institute for Astronomy.

All three of them were set up in back in the eighties. However, due to political and social perturbations, they were put on hold for more than 20 years, only to be included as chief astrophysical missions into the Federal Space Program for 2006–2015. Currently, the next launch – the Spektr-RG – is scheduled for 2014, with the WSO-UV to follow in 2015.

Over this time the Spektr-RG has undergone major changes with regard to its scientific tasks as well as its design. The last version includes two X-ray telescopes – the main eRosita (developed by Germany) and additional ART-XC (Russia) – which are to observe the sky in the soft X-ray band. There has also been a change in ballistics. Under the initial scheme, the observatory was to be inserted into orbit around the Earth. Now it is planned to fly as far as to the L2 Lagrangian point – approximately 1.5 million km from Earth – where the gravitational forces of both the Sun and the Earth are balanced, so that the spacecraft can be kept there for a long time.

If successful, these plans would mean far more for space science in Russia than their scientific outcome could provide. Although astrophysical observatories contribute a substantial part to the pride of other space powers (the first to mention is NASA's Hubble Space Telescope), neither Soviet nor its succeeding Russian space research has ever launched a comparable instrument – even though there were several very successful astrophysical spacecraft, such as GRANAT or the Kvant module onboard the Mir orbital station. Hopefully, the lack of momentum in this field will finally end in the years to come.