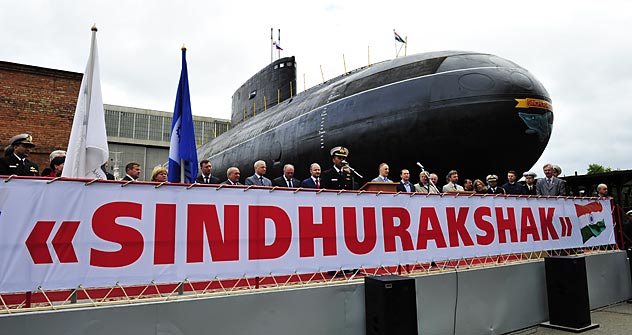 The Russian Zvyozdochka shipyard has completed the repair and modernisation of India’s Kilo class submarine.

The modernised INS Sindhurakshak is expected to be launched in the near future and to start dock trials. The vessel was taken out of Zvyozdochka’s ship-house, where the submarine has been “revived”.

The ceremony was attended by Roman Trotsenko, president of the United Shipbuilding Corporation, which runs Zvyozdochka, Deputy Navy Attaché of the Indian Embassy in Russia Rupak Kumar Pandey, members of the crew and Indian Navy observation group and their families.

The contract for intermediate overhaul and modernisation of the large diesel-electric submarine INS Sindhurakshak (project Type 877EKM Kilo) was signed between Zvyozdochka ship repair centre and the Indian Defence Ministry in June 2010, and the submarine arrived in Severodvinsk and was accepted for repairs in August of that year.

The submarine has been thoroughly inspected and all necessary systems and units have undergone repairs. Under the contract, the submarine was modernized simultaneous with the repair work, Zvyozdochka spokesman Evgeny Gladyshev said. The INS Sindhurakshak has been armed with Club S anti-ship missiles; more than ten Indian and imported systems have been mounted on the submarine, including the USHUS hydro-acoustic unit, the CCS-MK-2 communications system and the Porpoise radar installation. The INS Sindhurakshak has also had its cooling systems updated and undergone other operations to improve the submarine’s combat characteristics and safety.

INS Sindhurakshak, the 877EKM project, is India’s ninth Kilo class submarine. Built in 1995 by Admiralteiskie verfi shipyard in St Petersburg for the Indian Navy, the submarine was accepted in June 1997 and, in December 2010, the INS Sindhurakshak officially passed into service under the command of T.S. Ramanujan. The submarine was part of the Eastern and Western Commands of the Indian Navy and was actively engaged in Operation Vijay in 1999 and Operation Parakram in 2002. In 2006, the submarine had the honour of taking on board then-President Dr A P J Abdul Kalam, who spent the entire day at sea. This was the first time in history that an Indian President sailed aboard a submarine.

The INS Sindhurakshak is the fifth Indian submarine to be repaired and modernised at Zvyozdochka. The first vessel, INS Sindhuvir, was handed over to the Indian Navy after repairs and modernisation in 1999.

Zvyozdochka has become a leading partner of the Indian Navy in maintaining the combat readiness of the Kilo class submarines, experts in Moscow and Delhi say. Zvyozdochka provides its services not only at its Severodvinsk shipyard, but also at the home station of the Indian submarines.