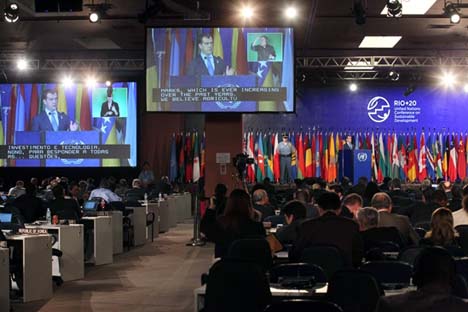 The United Nations Conference on Sustainable Development resulted in a document brimming with good intentions but low on concrete plans. Prime Minister Dmitry Medvedev perhaps put it best: “I have no doubt we could do more.”

The future we want will not exactly be the future we will have. At least, that is what can be gleaned from the preliminary results of Rio+20, the United Nations Conference on Sustainable Development held in Rio de Janeiro last week.

The summit’s final document, entitled “The Future We Want,” includes 49 pages of good intentions but few concrete actions: it does not specify responsibilities or deadlines or identify sources of financing for initiatives that aim to achieve sustainable development, especially in developing countries.

The disappointment of the non-governmental organizations that took part in the meeting was loud and clear. They complained that the leading countries produced a weak agreement to face the planet’s environmental challenges and used the global financial crisis as an excuse for not approving financing for sustainable development projects.

“It was frustrating,” summed up Brazilian activist Iara Pietricovsky, a representative of the People’s Summit, a civil society group. World leaders, however, had a different perspective and defended the conference as an important step forward for future environmental debate.

Sha Zukang, secretary-general of Rio+20, defended the meeting’s legacy. “In Rio, world leaders drew up a framework for action. We have built a great legacy concerning the future we want.”

Yet Ban Ki-moon, Secretary-General of the United Nations, made conflicting remarks in less than 24 hours. He criticized the document resulting from the efforts (Herculean, incidentally) of Brazilian diplomacy, and defined it as not ambitious enough.

The next day, recalling that he was a diplomatic representative, he accepted the tone set by the Brazilian Ministry of External Relations and brought his view into line with that of Brazilian President Dilma Rousseff.

In an official statement, he assessed Rio+20 as a “solid basis for the promotion of sustainable development.” Misunderstandings aside, the fact is that, 20 years after the first environmental conference (Rio’92), there is a lingering sense that countries still do not understand the urgency of finding alternatives to the current development model.

As a forum in which multiple viewpoints were expressed, Rio+20 could be considered a success, as the Brazilian authorities insist. Yet, as a means for saving the planet by reviving political commitment to sustainable development, it missed the mark, critics and activists said.

Countries kept their wallets closed. Now, lacking representatives from heavyweight countries – in terms of both economics and pollution, such as U.S. President Barack Obama and German Chancellor Angela Merkel – penny-pinching became the standard for the conference negotiators as well.

Activists said that even the $20 million announced by U.S. Secretary of State Hillary Clinton for financing clean energy projects in Africa is nowhere near enough.

If the final Rio+20 document “is the product of the collective ambition of the countries that attended this conference,” as President Dilma Rousseff said during the event’s closing session, then the world’s leaders are not very ambitious.

“There is only one simple truth: only together and as a team can we make our world more peaceful, safer and more comfortable for the current and future generations,” Medvedev said.

In a veiled critique of other major powers, Medvedev said that Russia was continuing to uphold its responsibilities, mainly with respect to the Kyoto Protocol.

One of the few concrete results of the conference was the creation of the Rio+ Center (International Center for Sustainable Development).  Its objective will be to encourage dialogue, but the date for its establishment at the Federal University of Rio de Janeiro has not yet been set.

There will also be a type of promissory note to be collected in 2013, when the leaders form a working group to present proposals to be implemented after 2015. After that date, the Sustainable Development Goals, building on the Millennium Development Goals, will be introduced.

The hope is that the member states of the United Nations will be able to establish a green economy on a global scale. This is a tremendous challenge, either today or three years from now.

Norma Moura is a journalist and has been assistant editor at the Brasília office of Jornal do Brazil and for the politics section of Correio Braziliense.