Russian Bond girls are brought together in London 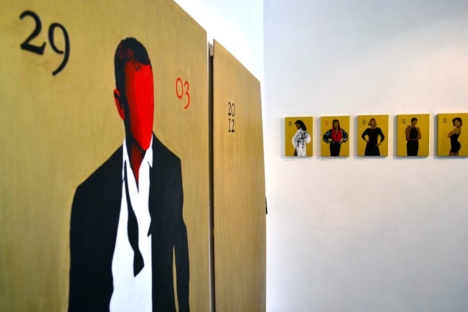 A London gallery is hosting an art show featuring James Bond girls by Russian-born artist Arina Orlova. She talked to RBTH about the exhibition.

Russian-born artist Arina Orlova’s Kills and Kisses, celebrating the 50th anniversary of the first film about the iconic British secret agent James Bond, is currently on display in London. The collection, featuring 30 Bond girls (six for every decade), which was inspired by iconic traditions, is not only a gallery of Bond’s female companions but also a glance at how the British perception of the beautiful and dangerous has evolved.

Russia Beyond the Headlines: Arina, where does the name Kills and Kisses come from?

A. O.: You always find inscriptions on the gold backdrops of religious icons. I have numbers on my “icons” – the number of women that each Bond killed (in black) and kissed (in red) for the audience to compare and draw conclusions about trends in violence against women on screen – that is what Kills and Kisses stands for. For Bond girls, the number on the gold backdrop is the year the film was released and it shows changes in the fashion, in clothing, hairstyles and physiques. We watch girls lose or gain weight, change their hairstyles and clothing styles. The colour red (the colour of martyrs in icon-paintings) used in the clothing means that the heroine died on screen.

RBTH: How do you account for Bond’s relationship with Russia?

A.O.: The books about James Bond were written during the Cold War, when the Soviet Union was the main adversary. Soviet Smersh (an acronym for “Death to Spies” in Russian) is Bond’s arch-enemy in the book series. Smersh tries to do away with Bond; their headquarters is in Leningrad. However, in the films, Bond thwarts the plans of the Spectre terrorist organisation and some independent villains in a bid to prevent a war with the USSR. Although most of the villains represent independent organisations, you can still see the general hostility towards the Soviet Union. The second episode, From Russia with Love, featured Tatiana Romanova, the lead female, while KGB agent Major Anya Amasova (aka Agent XXX) became the first woman to match Bond’s expertise and skills.

RBTH: Why do you think many of the Bond girls are Russian?

A.O.: It seems there is a myth that Russian women are beautiful and dangerous. It is an echo of the Cold War, when the Iron Curtain fuelled people’s imaginations – it seemed anything might be going on beyond the curtain. Besides, no woman could ever resist Bond’s charms and the idea of Russian ladies falling into Bond’s romantic traps must have flattered the British. It seems this myth still exists. I live abroad and often hear jokes about Russian spies, the KGB and so on. Trips to Russia are still perceived as something exotic and foreigners still see us as being mysterious and dangerous. The recent exposures of Russian spies have just added fuel to the fire.