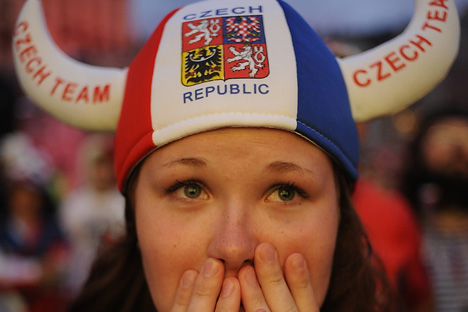 Wroclaw is a late-riser. Until about noon, only the foreign fans, who are more tourists than fans, can be seen wandering in the streets. It is not until two o’clock that signs appear that a game is coming up: Poles in red-white clothes, Russians and Czechs in the colours of their national teams spill out into the streets. One can hardly tell them apart, because both our fans and Czechs are dressed in red, blue and white. If the flag hangs on the back and is tied in a knot at the neck, one gets the impression that they are all rooting for the same team. Even the Poles sometimes confuse us with their own.

Two hours before the opening game, the centre becomes crowded. There is red and white everywhere, with a sprinkling of blue, and the Poles chant their slogans. The fan zone is packed to capacity. You have to wait for someone to leave to get in. Beer is carried in glasses and tins, in kegs held above the head at mouth level of the mouth and under the feet.

One-zero, the Poles score. The referee obviously favours one side and the Poles clap their hands approvingly. It starts raining during the break but nobody leaves, huddling tighter under the tents. The Greeks, playing under strength, score and almost move into the lead. In the end it is a draw. It is raining. The Poles leave the fan zone. But there is no sign of sadness. They are hosting a football festival. They cheer and finish their beers.

After about an hour, many leave the fan area. It is the turn of Russia and the Czech Republic. There are nothing like as many Czech fans as there are Poles. The Polish fans wear scarves with the words, “Czechs are our brothers.” There are hardly any Russians. There is a sense that they have all left. As it turned out, they were all at the stadium, where they visibly outnumbered the Czechs.

Two-zero. The Czechs look dejected. The Poles gradually begin cheering our team. Two-one. The Czech fans come to life. They hope to cheer their team on to victory. Kerzhakov, after several misses, leaves the pitch. Pavlyuchenko replaces him to make a good pass and score a goal himself. Four-one. The Poles approach us to say we have a strong team. The Czech fans disperse. In a couple of hours, the centre is deserted. The Russians with their flags walk forlornly looking for fellow countrymen with whom to drink beer and celebrate victory. In vain. Everyone is saving up their energy for the next match with the Poles...