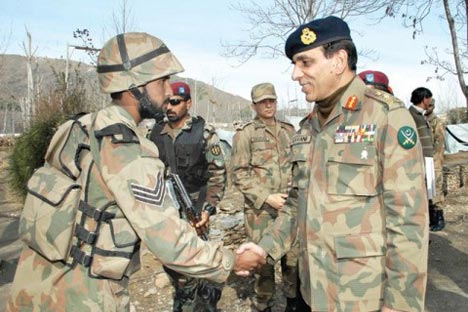 Parvez Kayani, the current Chief of the Pakistan Army

Is the United States starting a low-intensity war against Pakistan? The signs look ominous. Washington’s wrath will only increase in the coming months.

Is the United States starting a low-intensity war against Pakistan? The signs look ominous. The relentless drone attacks through the recent months are destabilizing Pakistan’s tribal areas, especially the areas adjacent to the border with Afghanistan. The US’ excuse is that the drones are hunting down the militants belonging to the so-called Haqqani group. But they are causing a lot of civilian casualties so much so that the United Nations officials begin to wonder if these wanton killings would constitute ‘war crimes’.

Indeed, the destruction caused by the drones is fuelling antagonism in the minds of the people who live in the tribal areas. They blame their government in Islamabad for doing nothing to protect them. On its part, Pakistan government keeps protesting to the US about the violation of its territorial integrity but the US ignores the demarches and continues with the drone attacks.

The US would know that the drone attacks do not provide the conducive setting for a normalization of the US-Pakistan relationship. Yet, it is not prepared to give up the drone attacks. There seems to a game plan to systematically destabilize the Waziristan area and to provoke the Pakistani military leadership.

Meanwhile, there has been a concerted attack by assorted militants of dubious backgrounds on Pakistani troops from across the border in Afghanistan. Exactly who they are or who are their mentors no one knows. In a cross-border strike on Monday, the militants used extremely brutal method to behead Pakistani soldiers. Evidently, they were making a point – showing their thumbs up at the Pakistani military leadership.

To add to the tensions, for the first time, the militants have publicly admitted that they do enjoy ‘safe haven’ on Afghan soil. This is something Pakistan has hinted at in recent period but it is now coming into the open. Again, they are taunting the Pakistani military leadership. The former US President George W. Bush would say, “Bring ‘em on!”

Coinciding with these developments, US’ commander in Afghanistan John Allen undertakes a visit to the Pakistani Army Headquarters in Rawalpindi on Wednesday, ostensibly for the purpose of discussing the reopening of the NATO’s supply routes through Pakistan. But his real intention would have been to fathom the mood of the generals in Rawalpindi following these provocations. He probably wished to reinforce the signal to the Pakistani side that the US might hit back at Pakistan with cross-border terrorism unless Pakistan cracked down on the Haqqani group. Allen did this nicely and diplomatically – but unambiguously – by proposing ‘joint operations’ by the US and Pakistan forces along the border region.

Allen met the Pakistani army chief Parvez Kayani in a one-on-one meeting. Kayani seems to have protested about the safe havens available for the militants on Afghan soil and called on the US-led coalition troops in Afghanistan to stop “miscreant attacks on Pakistani border posts.”

This is going to be a cat-and-mouse game. Pakistan is hunkering down and the US is losing patience. The decision in Washington seems to be to carry the war into Pakistani territory and incrementally inflict such unbearable losses that Pakistan finds it impossible to defy the US’ regional strategies.

Quite obviously, the US has concluded it has no alternatives but to step up the pressure and escalate tensions in a calibrated way. The US has been taken by surprise at Pakistan’s ‘strategic defiance’. The fact of the matter is that the present directions of Pakistani foreign policy hold the serious threat of undermining the US’ regional strategies with regard to permanent military presence in Central Asia, US’ containment strategy toward China (and Russia), projection of the NATO as a global security organization and of course the so-called New Silk Road Initiative.

The possibility that with Russian and/or Chinese participation, Pakistan might proceed with the Iran gas pipeline project infuriates the US to no end. Pakistan’s manifest enthusiasm for Russia’s participation in the TAPI [Turkmenistan-Afghanistan-Pakistan-India] gas pipeline project rubbishes the US’ expectations that American companies could secure lucrative energy contracts via involvement in the project. The US apprehends that during the visit by Russian President Vladimir Putin to Pakistan in September, the two countries may begin a qualitatively new level of relationship with major projects in the energy sector.

If that happens, the US’ containment strategy toward Iran also begins to unravel.

In sum, the US’ patience is wearing thin. The common wisdom in the international community, historically speaking, has been that the Pakistani elites with their comprador mentality might say a few hot words now and then but would ultimately be loyal foot soldiers of the US agenda. The basis of this supposition is that ultimately the class interests of the Pakistani elites would prevail as the crucial determinant of statecraft. Of course, the US has had to pick up the tab for the services rendered by Pakistan but that was only to be expected.

The US establishment has been attuned to this paradigm characteristic of the cold-war era. That is why the US establishment is shocked to see that the Pakistani elites (military leadership, in particular) are no longer what they were supposed to be – Washington’s hirelings serving the US’ global agenda.

Washington’s wrath will only increase in the coming months. We are witnessing the commencement of a US-inspired low-intensity war against Pakistan being waged by obscure militant groups based in ‘safe havens’ inside Afghanistan. Call it by whatever name one likes, but the project aims at breaking Pakistan’s strategic autonomy.

To be sure, Pakistan comprehends what is going on. But what are its policy options? ‘Hot pursuit’ across the border into Afghanistan across formidable terrain may seem an option. But it isn’t an option. It may turn out to be a trap, as the US may also choose the precedent and send its own troops into Pakistan. Carefully planted media leaks recently revealed that the thought of cross-border attacks on Afghanistan by US troops did cross the American mind more than once in the past. Suffice to say, Allen’s proposal to Kayani on ‘joint operations’ is a double-edged sword.