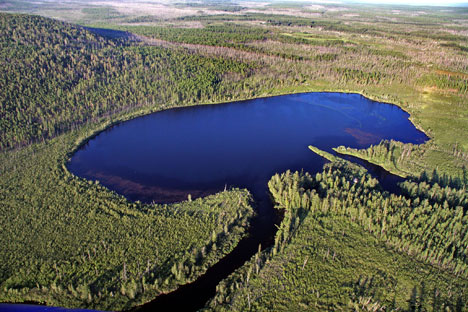 Italian scientists claim they have found the remnants of a meteorite that they say created a Siberian lake more than 100 years ago and Russian scientists want them to prove it.

“Italian Hoax” and “Unbelievable Adventures of Italians in Siberia” are two of the most popular headlines for articles about an Italian research team that appears to have discovered the mysterious meteorite at the center of the Tunguska Event, a mysterious atmospheric explosion over Siberia more than a century ago.

Yet skepticism in Russia abounds. What can these sun-loving Italians know about our severe Siberian taiga, wondered scientists and columnists.

But it was no hoax, and no fantasy.

Since 1991, a team of scientists from the ISAR Institute for Marine Geology in Bologna have been coming to the Podkamennaya Tunguska River basin, where the blast shook the Earth. Some of the researchers, especially Luca Gasperini, the leader of the expedition, know the local taiga better than many of the locals.

“I have been fascinated by the Tunguska mystery since childhood and I have dreamed of discovering the meteorite all my life,” the Italian professor said. “So, as soon as I had a chance, I put together a team of specialists and we went to Russia.”

Soviet scientists Vladimir Koshelev and Kirill Florensky were the first to hypothesize about the location of the crater; the two pinpointed Lake Cheko as the possible impact crater back in 1960. Yet there was no technical means to verify their hypothesis at the time. And with the possible crater full of water, scientists were not able to ascertain whether it had the telling bowl-shape made by the impact of an object hurtling through space.

Beauty and terror from the skies

“I was working with an axe when I suddenly saw that, to the north, the sky split in two and fire appeared high over the forest,” a local miner, Semyon Semyonov, one of the few eye-witnesses of the event, recalled at the time. “At that moment I became very hot, as if my shirt was on fire. I wanted to tear off my shirt and throw it down, but then the sky closed, and a strong thump sounded. I was thrown off the porch. After that, there followed such a noise, as if rocks were falling or cannons were firing; the earth shook, and when the sky opened up, hot wind raced from the north, like from cannons, which left traces in the ground like pathways...”

The news of a meteorite falling in the Siberian taiga became an international sensation – a few days before the event, in June 1908, another celestial phenomenon had caused a stir, when so-called silver clouds appeared in the sky in the Northern hemisphere for a few nights in a row. Those luminous clouds caused panic in Europe, Russia and Japan. The Tunguska blast became a logical explanation – the silver clouds were called clusters of interstellar dust that got into the upper stratosphere from the tail of a comet, whereas the fireball was a chip from the comet’s core, some reasoned.

There were alternative theories later. In the 1920s, the young Leningrad geologist Leonid Kulik put forward a new hypothesis. He came up with something quite intriguing: the core of the “lost comet” consisted not of ordinary iron, as many scientists believed in those days, but of an extremely rare alien mineral with colossal explosive power. The discovery of this matter would provide man with an unlimited source of energy. Yet none of the many expeditions to Siberia discovered the meteorite or even the impact crater. Moreover, the site that scientists believed was ground zero for the explosion had no crater, just “dead forest” – charred trees standing undisturbed, albeit stripped of twigs and bark by the fire.

Discovery at the bottom

Soviet scientists in the 1960s focused on Lake Cheko, a body of water some 5 miles from the assumed ground zero with an unusually round shape. What if the lake were the original crater, which was later filled with water from the Kimchu River?  Gasperini said he has no doubt that this version is what really happened.

“Some time ago, my colleagues from Bologna University and I drilled a few holes to take ground samples from the lake shore,” the scientist said. “It appeared that, under the sludge, there was a layer of totally different sedimentary formation that we called “Siberian slush” or “hairball” – the ground was mixed with debris and wood chips. Our experts discovered pollen that was hardly older than 100 years in that slush.” These “hairballs” offered the first evidence that the lake had only recently been a forest.

Three years ago, the Italian scientists conducted another test: they used sonar and an echo depth sounder to make a three-dimensional map of Lake Cheko.

“Siberian lakes are generally quite shallow and have flat bottoms. Their origin accounts for this – they were literally scooped out by the giant bulldozer of a glacier during the latest ice age,” Gasperini explained. “But Lake Cheko’s bottom is conical, and its depth at the lower part is 50 meters (165 feet). You cannot account for this sort of relief using the traditional soil erosion model. What is the possible explanation? There is only one: the lake is the crater of a fallen meteorite.”

They found the basin of Lake Cheko to be elongated and shallow; Gasperini’s team said that the basin’s unusual shape could be the result of a large fragment of meteor that made a “soft crash.”

To check their theory, the Italians had to look through Russian archives.

“We thought: what if we could find a documentary record that there was no such lake before the event?” said Gasperini. “Someone might think that impossible, but we pulled it off. We came across an 1883 map of the old Eniseisk province in one of the Krasnoyarsk archives, and there was no Lake Cheko on the map. There is no mention of the lake in letters, police reports or any other documents dating from the 19th century. Why? Possibly, they simply ignored it, but another possibility is that there was no lake in that spot at all.”

Finally, the Italians’ best card: Professor Michel Pipan at the University of Trieste hired an Mi-26 helicopter in Krasnoyarsk to carry out geomagnetic aerial photography of the lake and its surroundings.

“Right above the middle of the lake, the machine detected a significant magnetic disturbance, i.e., there is a material mass deep under the lake with a strong magnetic field, presumably iron. I am positive that it is our meteorite.”

One step from triumph?

The Italians are just one step short of triumph – they are missing a key sample of the meteorite from the bottom of the lake. To get the coveted sample, the Italians plan to deliver a floating drilling rig to Lake Cheko in order to nip off a bit of matter. How much it will cost to set up an offshore platform and drilling equipment on a lake in the Siberian wilderness is an open question, but Gasperini is full of optimism:

“I don’t have any specific plans, but I believe we will do it soon.”

“Soon” stands for “when we find enough money to finance the drilling phase.” It was for the purpose of raising money that an article in “Geochemistry, Geophysics, Geosystems” journal was published, announcing the demystification of the Tunguska event.

The sensational conclusions reached by the Italians have received a mixed response from the Russian academic community, however.

“Let’s wait and see what they get,” Mikhail Nazarov, head of the meteorite committee at the Russian Academy of Sciences and director of the comparative planetology and meteoritics lab at the Academy, said in an interview with Ogonyok. “It was proved long ago that the meteorite exploded in the air, disintegrating into microscopic dust. I don’t think we are in for any sensation, especially since the Lake Cheko theory has been double checked, and our specialists, even cosmonaut Georgy Grechko did a dive with a scuba set.”

Dmitry Kachalin, head of the “Rocks from the Sky” search group and full member of the Russian Meteoritics Society, shares some skepticism.

“The best thing the Italians can do to prove their point is to get a sample of the meteorite, instead of writing another article. Discovery of the Tunguska meteorite is only hypothetical until we have a tangible sample. On the other hand, our geologists can’t take a drilling rig to that forbidding spot – it is too troublesome and expensive. Maybe the Italians will succeed.”

The article is abridged and first published in the Ogoniok magazine.