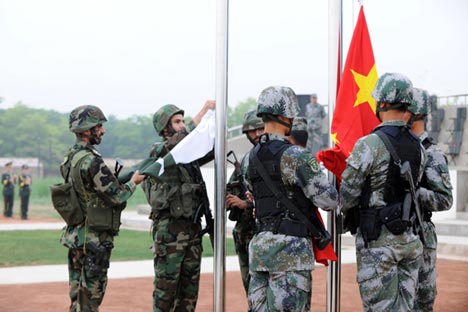 In the first of this 2-part analysis, Andrei Volodin looks at the political and strategic realities that define China’s relationship with Pakistan.

With Russian President Vladimir Putin planning to visit Pakistan, some of my Indian friends-journalists believe that the proposed trip is a kind of punishment for India because of Delhi's ‘pro-American’ foreign policy. I think that such a simplistic explanation underestimates the complexity of the situation in the southern part of central Eurasia, which will experience new changes after foreign troops withdraw from Afghanistan. And then a new geopolitical equation will emerge, where Pakistan and its geopolitical alliance with China will surely be the central element due to historical reasons and geographical circumstances.

In 1950, Pakistan was one of the first countries to recognize the People’s Republic of China, while in the 1960s to early 1970s it remained Beijing’s most steadfast ally during a period of a relative international isolation of the latter. China appreciates this support by providing Pakistan with both military, and technical and economic assistance, including the transfer of nuclear technology. Some experts believe that strengthening multilateral connections between India and the U.S. will make strategic alliance relations between Islamabad and Beijing even closer, even more so, because the Pakistani elite considers the partnership with China to be a security guarantee.

Military-technical cooperation (MTC) of Islamabad and Beijing is carried out in three main areas:

Rockets: Pakistani armed forces have short range and medium range missiles that experts regard as a ‘modification of Chinese ballistic missiles’;

Combat aircraft: the Pakistani Air Force has aircraft of Chinese design – JF-17 Thunder and K-8 Karakorum, as well as the co-produced interceptor aircraft. In addition, the Pakistani Air Force uses the early warning radar system made in China (U.S. experts believe that the delay in the transfer of the remains of the stealth helicopter that took part in the elimination of Osama bin Laden on May 2, 2011, was associated with its preliminary study by the Chinese military);

Nuclear program: it is believed that China could have transferred to Pakistan the technologies that are critical to the production of nuclear weapons.

In addition to MTC, Pakistan and China are actively developing economic relations; their development acceleration was caused by a Comprehensive Free Trade Agreement of 2008. By some estimates, the bilateral trade is approaching $15 billion. With China's help, long-term infrastructure projects are being implemented in Pakistan, covering road construction, minerals development (including copper and gold), the classical energy manufacturing as well as several projects in the nuclear / non-classical energy field. An important object of the joint activity was the construction of the deepwater port of Gwadar in Baluchistan Province (the port complex operation was started in December 2008.). This port, located at 180 nautical miles from the entrance to the Strait of Hormuz, through which about 40% of the world's supply of oil by water is accomplished, is of strategic importance to Beijing as well. First, it provides diversification and hydrocarbons-supply protection and, secondly, it is possible to access the Arabian Sea through Xinjiang Uygur Autonomous Region (XUAR), which is important for the overall economic security of China.

Formally, Pakistan has two main strategic allies – China and the United States. However, in the light of the events in 2011 the country's ruling circles have lost confidence in America and increasingly rely on China, referred to, at an informal level, as the ‘all-weather ally’. (An important factor in the growth of Islamabad's distrust to Washington was the US-Indian ‘nuclear deal’ that has in fact excluded India, according to Pakistani officials, from the nuclear non-proliferation regime.) The decision by China to build two nuclear reactors in Pakistan, in addition to the existing ones, was a vivid demonstration of mutual trust.

However, there are still some problems in the ‘all-weather allies’ relationship. China's elite is concerned with the high level of political extremism in Pakistan. Beijing is worried about the growing militancy of the Uighurs operating from the tribal area of Pakistan. According to experts, a significant number of Uighurs who attended madrassas in Pakistan in the 1980s have been subsequently mobilized to units operating on the territory of Afghanistan – first against the Soviet troops and later against the combined forces of the U.S. and its allies in their fight against the Taliban. A certain faction of the Uighurs – ‘Mujahideen’ - apparently returned to China.

Another cause of concern in Beijing is the frequent attacks of political radicals against Chinese nationals working in Pakistan on contract (more than 10,000 people). The situation is particularly difficult in the province of Baluchistan, in the western part of the country. Therefore, Beijing, preoccupied as it is with the safety of its citizens as well as the country's prestige in the Muslim world, does not put a special emphasis on combating terrorism in Pakistan, in fact, entrusting a major role in this campaign to the United States. In its turn, Washington takes into account China's growing concern over proactive forces of political Islam in Pakistan, seeing the coincidence of the United States’ and China's long-term strategic interests in combating radicalism.

China seeks to maintain a strategic policy toward Pakistan that blends the two contradictory principles: 1) restriction of the geopolitical influence of the U.S. and India in South Asia, and 2) protection of the Celestial Empire against political extremism emanating from the Pakistani territory. This task is solved both by the balanced development of relations with Islamabad and Delhi, and through the promotion of good neighbourly relations between the two ‘historic rivals’. This, among other things, is due to the relatively ‘impartial’ policy of the Middle Kingdom, in particular regarding the ‘Kashmir problem’. Such a compromise position of Beijing is apparently connected with the fears of a possible impact of the ‘demonstration effect’ of fermentation in the ‘big’, i.e. historical, Kashmir on tentative ethnic and religious turmoil in Xinjiang and Tibet.