Russia may fight fires in the U.S. 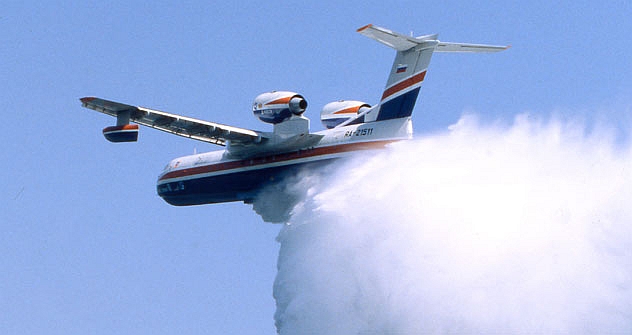 As the U.S. fights an epic summer fire in Colorado, Russia offers an aircraft with fire-fighting technologies that has a chance in the U.S. market.

The United States has its eyes on Russia’s Be-200 amphibious aircraft to bolster American-made fire-fighting aircraft, just as the country contemplates a radical renovation of its fire-fighting fleet, according to sources in the industry.

The ongoing fire in Colorado, both epic and uncontrollable, may spur the country to quicker action to renew its fleet.

These planes are sometimes the only means to fight fires, especially at industrial sites or large explosive facilities. The ability of a plane to travel at jet speed and begin extinguishing fire often offers the only chance to save people or prevent a large-scale environmental disaster.

The Be-200, a multipurpose amphibious aircraft made by Taganrog-based Beriev Aircraft Company, passed the first Federal Aviation Agency (FAA) certification tests this month. Specialists with the U.S. Interagency Tanker Board visited a test base in Taganrog to examine the Be-200ChS, a modification developed for fire-fighting operations.

Russia and the United States already contracted for the sale of ten planes in May 2010, and deliveries will start as soon as the aircraft completes tests and obtains an FAA certificate, according to Nikolai Lavro, deputy chief designer at Beriev Aircraft Company.

The Russian aircraft factory said in a statement that the initial Be-200 tests confirmed that the amphibious model is in compliance with U.S. requirements for scooping water when skimming the surface. However, the Americans would also like to be able to fill the tanker with flame retardant at the airfield, which calls for some minor alterations in the fire-extinguishing systems. After its upgrade, the Be-200 will continue certification tests, which is an essential part of the effort to bring the Russian technology to the international market.

Currently, six Be-200 aircraft are successfully operating in Russia, and one more airplane is used for fire-fighting in Azerbaijan. The Russian Ministry for Emergencies has placed an order for eight more Be-200 units for three fire-fighting wings in the Central Region, Siberia and the Far East.

Yevgeny Trunov, deputy head of the Federal Forestry Agency, said: “We will tackle this issue [renovating its fleet] within two or three years – this will cost the state between 15 billion and 20 billion rubles" (between $450 million and $600 million). In November 2011, the Russian Defense Ministry signed a pre-contract arrangement for the delivery of eight Be-200ChS planes in 2013-2014.

View the infographic: The Be-200, a multipurpose amphibious aircraft

The Be-200 is as expensive as it is innovative. The Ministry for Emergencies is buying the planes at about 1.5 billion rubles ($50 million) apiece. If the Taganrog factory increases production of the planes, they may become less expensive.

Russian contracts will not be enough to increase output, therefore, the United Aircraft Corporation, which controls the Taganrog-based plant, hopes to benefit from foreign demand, primarily in Europe. The plane has been employed in rescue and fire-fighting operations in Spain, Italy, France, and Greece. Meanwhile, Russian President Vladimir Putin said that it is unprofitable for Russia to lease the expensive machine to foreign customers and instead urged they should buy the planes.

Beriev Aircraft Company’s biggest achievement  has been an agreement with French fire fighters for trial operation of the Be-200. Following the Le Bourget Air Show in June 2011, the Russian plane was used for test flights by French fire-fighting aviation for two months. The French side is processing the results to decide on including the Be-200 bid in the tender to be opened by the French fire-fighting forces. The timeframe for the tender has not been announced yet.

The Russian amphibious aircraft will have to fight off competition from foreign makers, especially from the Canadian Bombardier 415. The Canadians have 40 years of experience in operating the plane, a well-developed after-sale service, and impressive production volumes – about 200 planes of various modifications fight fires all over the world. The key advantages of the Be-200 are its jet speed, range, and a water container twice the size of that of the 415.

Aleksey Ekimovsky is the author for market guide “Russian Transport”.