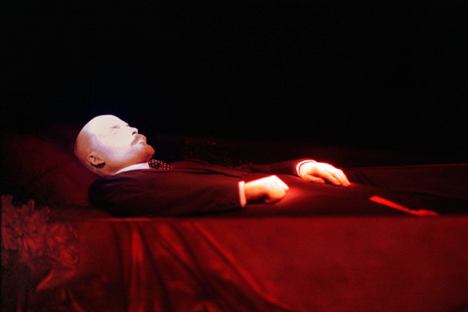 About once a year, Russia is disturbed by the question: Shouldn't Lenin's body be buried? But a number of circumstances make us doubt that the answer will be a quick one.

Vladimir Lenin's Mausoleum, which was built between 1924 and 1930, and the body preserved in it for nearly nine decades are items that if hypothetically copyrighted would bear a label: C, or R or TM. From 1953 to 1961, the body of Lenin’s immediate successor was kept in the same room, after being embalmed with the same technology. There is no question of Josef Stalin’s body coming under such a copyright as the decision to bury his body was unanimously taken at the 22nd Congress of the Communist Party of the Soviet Union (CPSU).

The big question iswho owns the mausoleum and the body of Lenin? Who is Lenin’s heir or legal successor? In the days of the Soviet Union, the mausoleum with its sophisticated systems was primarily considered as a well-guarded object of national security and belonged to the state. The building came under the jurisdiction of the national security and intelligence service, first known as the NKVD and then the KGB and directly under the Kremlin.

Until Stalin’s death, Lenin’s body was formally registered as the property of a laboratory owned by so-called Lubyanka Empire. The laboratory was then transferred under the guise of the Ministry of Health. Lenin's body is now "serviced" by the Center of Biomedical Technology Research of the All-Russia Institute of Medicinal and Aromatic Plants Production Association, a body that comes under the Russian Academy of Agricultural Sciences.

There is no legal clarity about the body and the mausoleum’s status in Russia. If the Russian Government decides to bury Lenin’s body, the process would be a bureaucratic nightmare. Strictly following the law, thousands of secret orders of the erstwhile Soviet Government would first have to be declassified before being cancelled. Several thousands of orders exist, such as the order by the People's Commissar of Internal Affairs Lavrentiy Beria on November 20, 1939, in his report to the Chairman of the Soviet government Vyacheslav Molotov (N 5114 / b), which says:

"To study the conditions for further success of the preservation of V.I. Lenin's body and to continue scientific and experimental work [...] My Assistant (Personnel), 3rd Rank Commissioner of State Security, comrade Kruglov has been ordered to allocate the existing positions in the NKVD of the USSR to the State Laboratory staff [...] The laboratory shall report its work to the commission appointed by the government [...]The laboratory is administered by the commandant of the Kremlin, according to expenditure estimates released for its operation."

Documents on Lenin's burial and creation of the first wooden mausoleum are still kept unused in the second secret inventory of Fund N16 of the Commission for Perpetuating the Memory of Lenin, hidden in the bowels of the former Central Party Archive of the former Institute of Marxism-Leninism of the former CPSU Central Committee.

We are soon approaching the 90th anniversary of Lenin’s death. All the imaginable and unimaginable periods of secrecy reserved by the law are gone. Why aren’t the documents being made public? Why are people still trembling over Lenin's funeral? Because the commission’s files may have the secret formula of a magic liquid that was invented by Professors Zbarsky and Vorobyev, to preserve the leader's body forever. The same Zbarsky, about whom Beria wrote to Molotov:

SNK of the USSR

Overseeing the preservation of V.I. Lenin's body, informed about the need for work to address some of the changes that have taken place in the body (half-open eyes, the decay in the edges of the nose and the left hand).

Simultaneously, the commandant of the Kremlin reported that during a routine inspection of V.I. Lenin's body, they discovered an opening of the seam on the head and darkening on the nose.

To take measures to eliminate the detected changes it is necessary to close the mausoleum of V.I. Lenin from March 1 to April 25, 1940... "

88 years have passed and the magic liquid’s chemical composition and formula are still classified. In addition to archival and historical issues there may be more sensitive matters, such as financial ones.

Does that mean that the burial of Lenin will result in immediate publishing of the liquid's formula, its privatisation, mass production, sales in pharmacies (with or without a prescription), commercial sales on the Internet and exports? The liquid would be in huge demand, at least for wide application not only for cadavers, but also for the manufacture of stuffed animals.

Is it possible to assert unequivocally that someone has already received the patent for the Vorobyev - Zbarsky liquid and formalised the property rights? This is another question. After World War II, constructing mausoleums and embalming the bodies of dead leaders became an international fashion. Soviet expertise was in demand at the highest level. The most successful project in the fraternal socialist countries – participants of the Warsaw Pact - was the preservation of Comrade Stalin's best Bulgarian disciple Georgi Dimitrov's body.

The Bulgarian comrades have now been in NATO and the European Union for a long time. The question of Dimitrov's body was solved there quickly and that too, many years ago. At the same time, the grand mausoleum was blown up. The images from the explosion were transmitted around the world and are popular on YouTube. The mausoleum put up a stiff resistance. Comrade Dimitrov died in the atomic age, and the house built for him was to withstand a nuclear explosion.

Embalmed by the Soviet prescription, the leader and first president of the People's Republic of Angola comrade Agostinho Neto was quickly reburied long ago, because the magic solution of Professors Vorobyev and Zbarsky turned out to be ineffective in African conditions.

The Soviet Ambassador who stood up to Stalin on India

I remember that before his death, Stalin became disillusioned with the ‘Slavic Socialism’ and turned his attention towards Asian Socialism. The strength of this attention is felt up to this day. In the People's Republic of China and its neighbouring countries such as the Socialist Republic of Vietnam and North Korea, the bodies of the founding fathers have been embalmed and carefully stored in the mausoleums open for public veneration and worship. There’s no need to have a developed political imagination and historical knowledge to understand who gave out the know-how for all of these mausoleums, sarcophagi, ventilation and air conditioning and so on to copy.

One can guess that the Russian debate is annoying our friends from the Asia-Pacific region. Our friends want to forever preserve and keep the bodies of President Ho Chi Minh, the Great Helmsman Chairman Mao, the Great Leader Kim Il-Sung (and recent reports suggest the recently deceased Great Leader Kim Jong Il). These friends will continue to want to see the original mausoleum in the Red Square in Moscow for years to come.