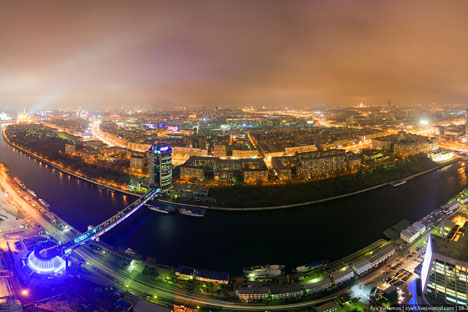 Moscow has just doubled in size. The big changes to the city limits will mean relocating the country’s Parliament and Supreme Court to new greenfield sites - all to turn the metropolis into an international financial hub.

The bold plan to create a “metropolitan federal district” was announced the previous June by the then President Dmitry Medvedev. The project was in line with the Kremlin’s ambition to make Moscow an international financial hub.

Besides global ambitions, the capital faces everyday domestic troubles. One of these is the gnawing issue of traffic gridlock, which has threatened Moscow with transport collapse. The city centre where most state and business offices are located is crying out for expansion – or a move outwards.

To deal with it, the capital’s extension plan proposed a relocation of some 40,000 officials to the new Moscow. Both chambers of the country’s Parliament, the Kremlin administration, the Investigation Committee, the Chamber of Accounts, the Prosecutor General’s Office and the Supreme Court are just a few of the high offices of state which will be packing their suitcases.

In addition to traffic, Moscow is facing an overpopulation issue; housing has turned into a headache for many. The capital’s density has reached 11,000 people per sq km, while in London, for instance, it is around 5,000 people.

The new city area stretching for 1,490 sq km (580 sq mi) to Moscow’s southwest, are to accommodate and give work  around 2 million people. Dozens of projected business centres, research institutions and tourist areas paint a glittering future for officials.

“This will be a goose laying golden eggs,” says Moscow’s Mayor Sergey Sobyanin.

The new greater Moscow has absorbed two towns and 19 residential areas previously belonging to the independent Moscow Region which is separate from the city. But despite expanding two-fold in area, Moscow has added only 250,000 new citizens to its 11.5 million residents.

New Muscovites will be eagerly looking forward to the capital’s social benefits. Some 4 billion rubles ($123 million) have been put aside in Moscow’s budget for that. Retirees are to see their pensions rise to at least 12,000 rubles (around $370) a month with the formal cost of living for Moscow senior citizens having been set at some 7,000 rubles ($220) a month this year. Funding of schools, kindergartens and hospitals will be also revamped to meet Moscow’s higher standards.

“I know a fire station is going to be built here now,” Aleksandr Pechurin, a new Muscovite, told RIA Novosti news agency. “Firefighters have not been coming as quickly as they should compared to Moscow standards. It takes them more than half an hour instead of 15 minutes, so when they arrive, there are only ashes left to put out.”

Still, many frown at the project. The Moscow Region in many places is a rural area where crops are grown and cattle graze. Urban standards just won’t work there, critics say. Especially if you think that not every village can boast stoves with piped gas or that many buildings were constructed back in the 1960s and have never seen major repairs.

Socially, the acquired land may amount to a different country.

“We live in a two-room flat and housing facilities cost us 6,500 rubles ($200) a month. In Moscow a similar flat would mean 3,500 rubles ($110) from your pocket. But bear in mind that prices here are as high as in Moscow, while salaries are much lower,” says another local.

The authorities have proclaimed a battle for “social equality” in the new Moscow. This has brought taxes down, but many fear officials’ enthusiasm could be short-lived.

“Nothing will change. Only papers and documentation will have to be redrafted,” sighs one local, thinking of long queues in various offices after personal and business addresses start mentioning Moscow.

Reclaiming and developing new territories will take dozens of years. Fresh projects listed include building two highways, extending the Moscow metro and constructing over 1,000 houses, as well as new headquarters for the Russian Parliament among other brand-new state buildings. But talk is already being heard that this expansion is just the first step before Moscow merges with the whole of the Moscow Region which surrounds it.