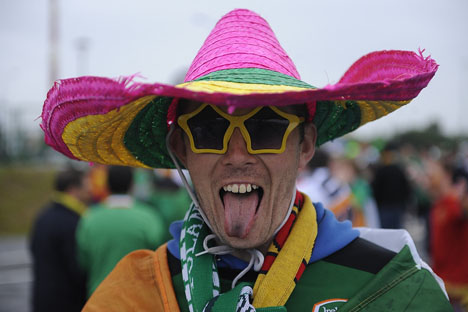 We are going to Gdansk for a day. It is a major port city on the Baltic Sea. The city is located in the northern Poland, and is the sixth most populous city in the country (460,000 inhabitants in 2006). Together with the neighboring Sopot and Gdynia, it forms the Truimyasto agglomeration – a Tricity – with a total population of about one million. This is what they usually call Gdansk agglomeration. It is very popular among the tourists from Europe and Poland itself as a center of tourism. Especially in the summertime when you can sunbathe on the beaches and swim in the Baltic Sea.

Today, there is a game of the national teams of Ireland and Spain. The Irish are more in number, or they are more pronounced and louder than the Spaniards. All of them are dressed in green, some with a red beard like the Dwarfs, wearing green tights, wizard’s or elf’s hats, someone came with a cabbage head – from which a cheerful pot-bellied Irishman immediately pulled a couple of leaves and ate them helping them down with beer. But the most colorful group are the Spaniards. Five men got dressed in Spanish women's traditional dresses and wigs and were walking well for several hours around the city, causing the shock and laughter among the passers-by. T

The Irish did not have a chance. As a result, they lost 4-0. But they accompanied their team with smiles, sang songs and celebrated the football holiday.