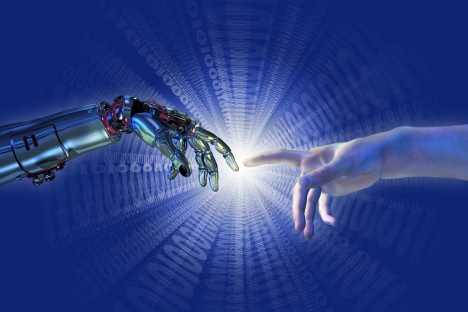 An artificial intelligence technology developed by a Russian engineer triumphs at the international Turing Test contest.

An artificial intelligence technology developed by Russian engineer Vladimir Veselov has won this year’s Turing Test contest. The competition took place in Bletchley Park near London on the 100th anniversary of the birth of test originator Alan Turing, a mathematician and cryptographer.

The Turing Test has a human judge converse via a text interface with both a program and a human. The judge must deduce from the answers received whether the interaction is with a human or a program. A program passes the test if it convinces a judge that it is human in 30 percent of the conversations. Since software normally replies faster than a human, the replies are shown with controlled time intervals.

Over 30 judges participated in the contest. Their goal this year was to distinguish five AI platforms from 25 hidden humans via chat. A total of 150 conversations were held, and in 29 percent of them, judges believed that the Russian chatbot was a human. Second place went to the JFred chatbot, the third, to Cleverbot. The other two bots to compete were UltraHal  and Elbot.

The Russian-origin chatbot has the personality of a 13-year-old boy –  one Eugene Goostman from Odessa. One judge noted that, unlike his competitors, Veselov has given his bot its own specific personality. For example, Goostman has a pet guinea pig, and his father is a gynecologist.

The age of the chatbot was not chosen at random either. “Thirteen is not old enough to know everything, and not young enough to know nothing at all,” Veselov said.

Veselov studied at the A.F. Mozhaisky Military and Space Engineering Institute in St. Petersburg, graduating in 1991. In 1997, he presented his doctoral thesis and then became employed as a researcher and a faculty instructor at the school. His focus includes the application of AI methods and systems in space vehicle control systems.

In 1999, Veselov began working with natural language processing systems in the St. Petersburg office of Boston-based company Artificial Life. He later moved to the U.S. and, in 2001, founded Princeton Artificial Intelligence, where Veselov and his partners developed their own AI platform. Since 2002, Veselov has worked for Johnson&Johnson where he is automating an analytical laboratory and a laboratory data processing system.

In 2011, the technology developed by the Veselov team was acquired by i-Free, a company based in St. Petersburg that is a specialized developer and implementer of innovative digital projects.

i-Free has used Veselov’s technology in its mobile software Everfriends for Android OS, one of the competitors of Siri, the intelligent personal assistant only available in iPhone. Like Siri, Everfriends utilizes speech-recognition technology to answer questions and execute the instructions of a smartphone owner.

This was not the first victory of a Russian technology in the Turing Test. Russian chatbot Cyberlover, which was trained to flirt with users in dating chats and extract their personal information, won the competition in 2007. At that time, experts said the bot “demonstrated an unprecedented level of social engineering.” It was developed by Russian project Botmaster, which is also known for its link spam mailing software XRumer.

Interested parties can chat with the 2012 winning chatbot at http://www.princetonai.com/bot/)