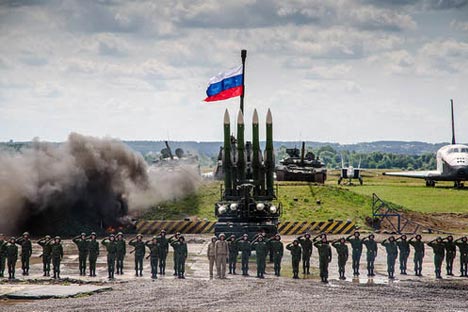 Today, the Russian military has eighty to hundred S-300PM and S-300 PS battalions at its disposal. Source: Press Photo

In 2013, the Russian army is likely to receive the S-500, a new set of missiles that can shoot down anything that flies.

The S-500, a new generation surface-to-air missile system, is to enter the Russian Air Defense arsenal in 2015. At present, the Russian Air Force is equipped with S-400 and S-300V4 complexes, which see their production rates gradually increasing. Still, the older generation of these missile defense systems is here to stay.

The information about the new Russian air defense system, which can be found on the Web, says that S-500 is the new, the fifth, generation of air defense missile batteries. It supposes a separation of the systems of destroying ballistic and aerodynamic devices. Its main aim is destroying medium-range missiles and intercontinental ballistic missiles. Most likely, S-500 will be smaller and more maneuverable than its former analogue S-400 Triumph. It will also have a powerful radar beacon which can locate targets within the radius of 800 to 900 kms.

The development of the unified S-500U system for the Russian Air Defense and army air defense units was launched in the 1960s by the Russian military and the First Design Bureau with the Soviet Ministry of Radio Industry, the main research unit of the Almaz-Antei company. The initial S-500U was supposed to engage predominantly enemy aircraft.

At the end of the 1960s, however, the military changed their heart in favour of a unified S-300 family, which included the S-300V, its army version, designed to engage ballistic missiles as well as the anti-cruise missile and anti-aircraft S-300P which was designed for the Soviet Air Forces. The latter served as the basis for the naval S-300F missile. Still, their unification failed. The radar stations of the S-300V and S-300P shared only 50% of common design, whereas other crucial systems were completely different.

The collapse of the Soviet Union stalled many prospective projects, while the surface-to-air system research lived on. Towed S-300PT launchers were scrapped by the end of the 1990s; self-propelled S-300PSs, deployed in the mid-1980s, were revamped and re-emerged as S-200PMs. Meanwhile, another version of the system, known as the S-300PMU, gained world recognition and became a clear favourite. The anti-missile S-300V remained in the background, while the versions that had already entered into the service were modernized.

Further research in the field of next generation anti-missile and anti-aircraft systems resulted in the new S-400 system, an invention that allowed to resume the development of the unified S-500 complex on a new conceptual level. The batch production of the S-400 was officially launched in 2006, with the first battalion entering the Russian service as early as next year.

Today, a lot of hopes are pinned on the new plants that are to be built in Kirov and in Nizhny Novgorod, where the first lines are set to be started in 2015. The Kirov factory will be building anti-aircraft missiles, while the Nizhny Novgorod facility will produce launchers, radar stations, and command posts.

At this rate, by 2016, the Russian defence industry will reach the production capacity of five to six battalions a year. This will lead to the Russian Air Forces falling short of sixteen to twenty S-400 battalions out of the expected fifty six. Considering that the S-500 program is still running behind schedule, it will probably be tested only in 2015, with its batch production kicking off after 2017.

As a result, the Russian military can actually fall short of some twenty five battalions out of the sixty six S-400/500 artillery batteries slated to enter its service by 2020. Although the S-300V4 deliveries will be running their course, they will replace the obsolete S-300V versions and therefore won’t improve the situation around the outdated S-300P series.

Thus, it’s becoming increasingly important to revamp the deployed S-300PM systems or even their earlier variants. The air force “workhorses” can even be given a second life by using the modern components and upgraded missiles, which will allow Russia to compensate for the shortage of new air defense systems while the S-400/500 production is gaining steam.

Today, the Russian military has eighty to hundred S-300PM and S-300 PS battalions at its disposal. To prevent its air defense field from shrinking, it will have to keep at least fifty S-300 batteries in its ranks by 2020.