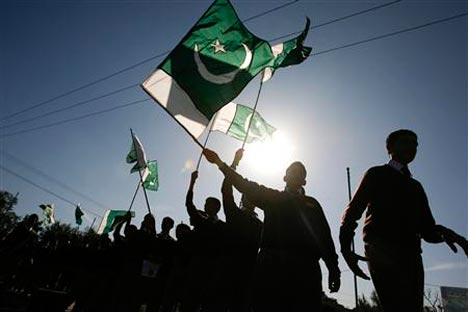 Pakistanis evoke highly negative emotions worldwide, including in Muslim majority countries, says a US survey. Not just the elites but the common Pakistani too is culpable in the country’s spectacular failure.

It has never been easy being a Pakistani. Pick a terrorist act committed anywhere in the world and chances are it has Pakistani fingerprints all over it. In many places, the word ‘Pakistani’ is a four-letter word.

So it must be a nasty kick in the guts for the Pakistanis to learn that their only allies, the Chinese, as well as the majority populations of several Muslim countries, including Egypt, Tunisia, Jordan and Lebanon, see them as a bunch of baddies.

A survey of 21 countries released on June 27, 2012 by the United States-based Pew Research Center suggests that Pakistan is not only a universally disliked country but the Pakistanis themselves have learnt nothing from their history, continuing to support the very actors who are responsible for their country’s negative image.

It is a measure of Pakistan’s penchant for exporting terrorists, counterfeit currency and drugs that India has constructed a 2043 km long steel fence across its border with its wayward western neighbour. The floodlit fence is so bright it can be seen from space as a bright orange line snaking from the Arabian Sea to Kashmir.

Now Iran is building a 700-km steel and concrete security fence along its border with Pakistan “to prevent border crossing by terrorists and drug traffickers”. When complete it will make Pakistan the most fenced-in country in the world.

You get the picture. Pakistan is not exactly a popular tourist destination.

In four of the five predominantly Muslim nations covered by the American survey, over half give Pakistan negative ratings. Jordan (57 percent), Lebanon (56 percent), Tunisia (54 percent) and Egypt (53 percent) had an unfavourable opinion of Pakistan. The only exception is Turkey, where attitudes are divided (43 percent negative and 37 percent favourable).

In East Asia, 52 percent of Chinese see Pakistan unfavourably, as do 59 percent in Japan and 59 percent in India. The Chinese response is not surprising as Pakistan-trained Uighur Muslims have launched terror strikes in China. Japan, a nation historically distrustful of foreigners, decided not to take chances and deported more than 15,000 Pakistanis after 9/11.

Every country has an army but the Pakistan Army has a country. The Pakistani military runs a $20 billion commercial empire that includes interests such as milk processing plants, bakeries, banks, cinemas, heavy industry and insurance. Plus a good chunk of the billions of dollars in American aid goes straight into the pockets of the generals.

This corrupt empire is walled off from civilians. Defence analyst Ayesha Siddiqa, author of Military Inc: Inside Pakistan’s Military Economy, says there is little accountability and widespread siphoning of funds. The Pakistani military operates a virtual apartheid where an increasingly poor civilian population faces discrimination at virtually every level of national life – from jobs to pensions.

Also, the Pakistani military has lost four wars against India. After each of these wars Pakistan lost territory and the generals their credibility. But bizarre as it sounds, this military is the most respected institution in the country. As many as 77 percent say the military has a good influence on the country, nearly the same percentage (79 percent) as last year. The Pakistanis are either very tolerant or very brainwashed.

Sure, the military’s ratings have slipped from a high of 86 percent in 2009, but all it takes is one border flare-up for the ratings to travel north. The generals always oblige.

The media comes next with a 68 percent rating, followed by religious leaders at 66 percent.

President Asif Ali Zardari receives the most negative reviews. Only 12 percent believe he has a good influence, while 84 percent dislike him. Attitudes about Zardari are particularly negative in Punjab (96 percent bad influence) and Khyber Pakhtunkhwa (95 percent).

Why is he so unpopular? Well, Zardari has done more than any previous leader to normalise trade and diplomatic relations with India. His mending fences approach lacks the customary anti-India sting.

Militant groups such as Al Qaeda and the Taliban have limited appeal among Pakistanis. Relatively few Pakistanis express a positive view of either Al Qaeda (13 percent) or the Taliban (13 percent). Attitudes toward groups affiliated with the Taliban fare no better in the eyes of the Pakistani public. Tehrik-i-Taliban, an umbrella organization of Taliban-linked groups in Pakistan, and the Afghan Taliban are viewed positively by only 17 percent and 14 percent of Pakistanis, respectively. The secretive Haqqani network, which is also associated with the Taliban movement, is viewed favourably by only 5 percent of Pakistanis.

The attitudes toward Lashkar-e-Taiba are somewhat more positive – 22 percent say they have a favourable opinion of this militant group. This is hardly surprising because the Lashkar mostly targets India.

When asked which is the greatest threat – India, the Taliban, or Al Qaeda – a clear majority named India. Roughly a quarter cited the Taliban and only 4 percent say Al-Qaeda. This is despite the fact that Al Qaeda blew up the Karachi naval base last year.

Only 22 percent of Pakistanis have a favourable view of India, although this is actually a slight improvement from 14 percent last year. Supporters of the two major opposition parties – former Prime Minister Nawaz Sharif’s Pakistan Muslim League (PML-N) and cricketer-turned-politician Imran Khan’s Pakistan Tehreek-e-Insaf (PTI) are much more likely to name India as the biggest danger (71 percent and 61 percent, respectively) than those that affiliate with Zardari’s governing Pakistan Peoples’ Party (PPP), where this view of India is held by 46 percent.

This should alert liberal Indians who rush to the border to hold “candlelight vigils” for peace. Most Pakistanis are united by their hatred and fear of India – it is only a matter of degree; some hate more, others less.

Biting the hand that feeds

India does not get any aid from the United States and yet among all 21 nations Pew surveyed, Indians seemed most favourably disposed towards it. Only 12 percent said they had an unfavourable opinion of the United States.

On the other hand in Pakistan, which is heavily dependent on American cash and weapons, 80 percent had a negative opinion of America, with 74 percent regarding it as an enemy country. Around four-in-ten (38 percent) said US economic aid is having a mostly negative impact on Pakistan, while just 12 percent believed it is mostly positive.

Curiously, 40 percent said American military aid is having a mostly negative effect, while only 8 percent said it is largely positive. Pakistan’s military stockpile is largely American supplied. Do the Pakistanis believe their North Korean knockoffs will do a better job?

One of the ironies of Pakistani life in the West is that they pose as Indians, the very people they hate so much. According to Asghar Choudhri, the chairman of Brooklyn’s Pakistani American Merchant Association, a lot of Pakistanis can’t get jobs after 9/11, and after the botched Times Square bombing, it’s become worse. “They are now pretending they are Indian so they can get a job,” he told a US wire service.

That is because Indians are among the highest educated and best paid ethnic groups, besides being highly integrated immigrants. Pakistanis, on the other hand, have been accused of honour killings, cousin marriages, child sex rackets, and terrorist activities in the very lands that gave them shelter.

From Ramzi Yousef, who bombed the World Trade Center in 1993 (eight years before Osama Bin Laden) and is now serving a 240-year prison sentence to Mir Aimal Kansi, who shot dead two CIA agents and was later executed by lethal injection, to Faisal Shahzad, the Times Square “Idiot Bomber”, there is a long list of Pakistanis who have left a trail of terror.

The Indian mask that many Pakistanis wear is to get around Western suspicions. Back home, it’s business as usual. Two incidents amply demonstrate that Pakistanis have learnt nothing about the dangers of flirting with terror. One was the widespread outrage across the country over Bin Laden’s killing by American commandos. The other was the unholy fracas over Kansi’s execution.

The day after a Virginia, United States, court handed the CIA shooter the death sentence, four Americans were shot dead on the streets of Pakistan. After his execution in 2002, Kansi’s funeral was attended by the entire civilian administration in his hometown Quetta, the local Pakistani Corps Commander, and the then Pakistani ambassador to the United States.

Thousands of mourners turned out as Quetta city shuttered down. Kansi’s coffin, draped in black cloth with verses from the Koran embroidered on it in gold, was carried on the shoulders of young men some 10 miles from the airport to his family’s home in Quetta.

In Islamabad, the capital city, lawyers and university students poured out on the streets in support of their newest ‘martyr’.

Veteran Indian writer Khushwant Singh is hardly the sort of person you would call anti-Pakistani. In fact, he’s been accused of “trenchant secularism” because he often backs the Muslim view against the Hindu-Sikh narrative. For decades, Singh’s house has been a watering hole for many of his Pakistani friends, who come to vent their frustrations. His mostly tabloid rants aren’t taken too seriously but he has a finger on the Pakistani pulse.

In November 2008, 10 Pakistani terrorists raided the Indian city of Mumbai, killing 166 people – mostly innocent civilians. How did the common Pakistani react when confronted with the fact that it was an operation planned and executed by their countrymen?

On the first anniversary of the attack here’s what Singh wrote in his column in the daily newspaper Hindustan Times: “To begin with, there was blank denial of any Pakistani being involved in the crime. This was tinged with apprehension that India may retaliate by carrying out similar operations in Pakistan and trigger off yet another mutually destructive war. When that fear proved baseless, it was replaced by a sense of achievement, a feeling of pride that their countrymen could plan and execute such a daring exploit with such finesse…Even the fact that among the innocent victims over 40 were Muslims was brushed aside. The sense of false pride in performing a foul deed still persists.”

This is a snapshot of Pakistani society where the arrow of time is travelling backwards, taking it into a spiral of medieval madness. Where the death of a terrorist merely means he will be instantly replaced by a hundred clones.

Is it any wonder that Paki is a four-letter word?