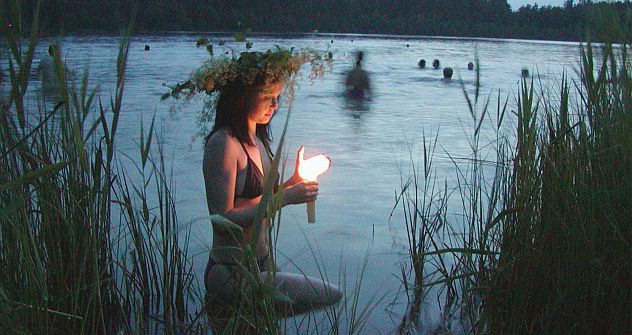 The Svetloyar Lake near Nizhny Novgorod brings together a lot of legends about Kitzeh, the “Russian Atlantis.” Source: ITAR-TASS

At the Svetloyar Lake near Nizhny Novgorod, archaeologists have found traces of an unknown medieval settlement that became a prototype for Kitezh, the “Russian Atlantis.”

Thousands of shards of pottery, fragments of iron knives, pieces of harness, a millstone and a tinderbox is practically all that is left of the Rusich, who lived six centuries ago on the shores of Svetloyar Lake. But there is something else – the remains of log cabins, found at a half-meter depth below the surface of the lake.

“Most likely, this was not a city but an odnodvorka – a house with outbuildings that housed 10-15 people,” said Evgeny Chetvertakov, head of the Vetluzhsky archaeological expedition. “Perhaps, in reality, this settlement was larger, but then part of it was taken by landslides into Svetloyar, and that formed the basis of legends about the mysterious disappearance of the city of Kitezh.”

Birth of a legend

Svetloyar has long been the subject of legends and rumors. This lake, almost perfectly oval in shape and filled with cold, clear water, is unlike anything else in the landscape of the forests beyond the Volga River. Scientists do not even agree on how the lake was formed; some geologists believe that Svetloyar was created by an earthquake, while others argue that the lake sits in the crater of a prehistoric meteorite.

Residents of Nizhny Novgorod are sure that the legends of their Kitezh date from the earliest days of Rus’, but the first mention of this sacred city dates back to the modern times. The death of Prince Georgy Vsevolodovich under the walls of Kitezh walls was outlined in the Kitezh Chronicle, which was created by Old Believers in the 1780s. According to the Chronicle, the city was founded by Prince Georgy. The book also mentions a Maliy Kitezh (Small Kitezh) on the banks of the Volga River, but notes that both cities were destroyed during the Mongol invasions. The Chronicle does not mention the disappearance of the city into the lake – just that it disappeared after it was destroyed and all its inhabitants killed.

However, the Old Believers – Russian Orthodox dissenters who never reconciled themselves to the Russian church reform of the 17th century – found much to like in the idea of a hidden city where the righteous live and work in prayer, and where only the chosen ones can enter, and gradually the legend of Kitezh emerged.

In 1968, scientists led by renowned archaeologists Mark Barinov and Tatiana Makarova began searching for the lost city and examined every corner of the lake shores; the divers explored even the topography of the lake bottom. Sadly, no artifacts more ancient than the 19th century were found. As a result, scientists for many years held the view that Kitezh never actually existed outside of legend. But six years ago, the Vetluzhsky archaeological expedition decided to take another look. It started an investigation of Krestovozdvizhensky Hill, where an old chapel stood that had not been sufficiently examined by previous expeditions.

“We read the reports of previous expeditions, and we feel that something is not stated there,” said Chetvertakov. “I wanted to double-check everything myself.”

The group’s very first expedition in the summer of 2011 brought an unexpected discovery – on the hillside the archaeologists found traces of an ancient settlement. And directly on the path of an annual religious procession from the shore to the church, the scientists found shards of traditional Russian pottery. This year, the scientists intend to continue the excavations; they believe that the size of the village they have discovered in no way reflects the real borders of the ancient settlement. They think Krestovozdvizhensky Hill was always prone to landslides, one of which absorbed the ancient Russian city, giving birth to a beautiful legend.

“In addition, we can confidently say that this settlement was abandoned by the inhabitants due an unknown reason,” Chetvertakov said. “Perhaps they left it in connection with the economic decline of the Nizhny Novgorod principality shortly after Nizhny Novgorod was devastated in 1408 by the troops of the Horde Khan Yedigei. Then new settlers came here and found the abandoned city remains. So the legend of the miraculous city of Kitezh resting in the heart of forests beyond the Volga River could be born and has been passed on from generation to generation.

First published in the Ogonyok magazine.