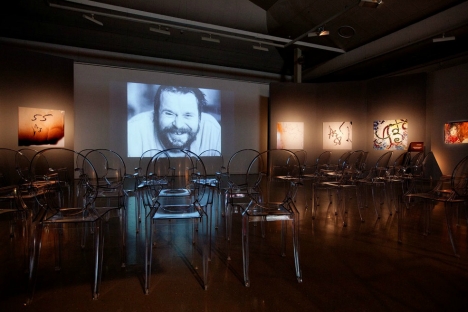 Nonconformist painter and visionary Zverev, persecuted in Soviet Times but appreciated by western collectors, begins to garner fame in Russia.

Suprematist sketches and dazzling watercolor portraits earned avant-garde artist Anatoly Zverev the title of “genius painter of the 20th century,” at least that is what Pablo Picasso called him. The Soviet artist never earned fame at home but did win renown in the West.

The Maly Manezh Gallery in Moscow features the "Zverev on Fire" exhibition, where visitors can admire the multifaceted talent of an artist who has not yet been appreciated at home. The best part of the display consists of 200 paintings from George Costakis’s collection, which miraculously survived the 1976 fire and were long considered lost. The burnt edges give them a special charm. Never surrendering to their fate, they seem to have soaked up the rebellious spirit of their creator.

He was also well known for his scandalous conduct matched only by Salvador Dali. A display of works by the rogue Soviet painter in the New Manezh Gallery in Moscow has been extremely popular but closes at the end of June.

Zverev was born in 1931, survived World War II, but died at 55, leaving a legacy of 30,000 paintings. After a major fire at the residence of Greek collector George Costakis in 1976, collectors were certain that most of Zverev’s works had been destroyed. Costakis, desperate, shouted into the receiver:

“Was anyone injured?”, Zverev inquired.

“Good. As for the pictures, I’ll draw more.”

Zverev, eternal wanderer, rebel and nonconformist, could not stand stagnation and official norms in art or life. He was expelled from the Moscow Art School for “improper appearance” and was then was forced out of the army with a diagnosis of schizophrenia. Also called the “genius tramp,” Zverev lived to challenge everyday “common sense.” In the mid-1970s, under Brezhnev, Zverev was known to walk into the Moscow metro in his battered jacket, looking like a guerilla fresh out of the jungle, and shouting implacably: “Now choose – either Lenin or me!” In those times, Soviet citizen could not only earn the reputation of being “anti-Soviet” for such an offense, but might even go to prison for a couple of years.

Zverev turned everything around him into art. If he had no paints, he would draw with the charred end of a stick, jam and beetroot juice. Zverev had a “quick brush.”

“He would arm himself with a shaving brush, a kitchen knife, gouache and watercolors and assault a sheet of paper. He would pour dirty water on the paper, floor, chairs, thrust gouache cans into the puddle and smear it with a wipe or even his shoes, achieving a colorful nightmare, then slap it with the shaving brush, made a few lines with the knife – and out of nowhere came a fragrant bunch of lilac!” artist Dmitry Plavinsky recalled.

Zverev’s portraits and graphics deserve separate note. “They have not yet produced a camera capable of snatching human features and leaving them on paper with the speed and accuracy of Zverev’s brush,” George Costakis said. Although Zverev made portraits of British diplomats and Soviet movie stars, he never had any money. “I can still see his winking face, hear his husky voice ‘Hey, chum, spare a ruble? I’ll immortalize you’,” his friend and colleague Vyacheslav Kalinin said.

Friends often refer to Salvador Dali’s shocking pranks when describing Anatoly Zverev’s bizarre behavior. Unlike the surrealist maestro Dali, however, avant-gardist Zverev was not seeking fame through his antics.

Zverev considered Van Gogh, Vrubel and da Vinci to be his teachers, not Dali or Picasso, because his teachers “do not disturb with the irrelevance of their endeavor.”

His first foreign display was held in the Paris Mot Gallery in 1965.

The Soviet Union was reluctant to display the works of troublemaker Zverev. Like many of the noncomformists, the artist had to take part in private exhibitions arranged in apartments. It was only after his death in 1986 that the Russian audience saw Zverev’s best 300 paintings displayed in the Tretyakov Gallery.