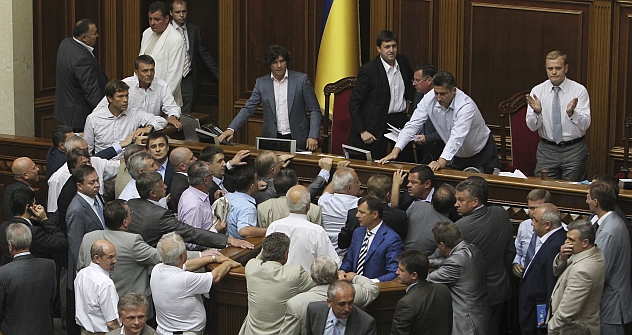 Ukraine's parliament in early June rushed through a contentious draft law upgrading the use of Russian in the country, sparking scuffles between deputies of the pro-government majority and those of the opposition who were caught off-guard. Reuters /

A new bill adopted by the Ukrainian parliament (Supreme Rada) gives Russian official status in nearly half of Ukraine’s regions. But not all Ukrainian lawmakers back the decision.

In response to the bill giving the Russian language an official status in Ukraine, the local opposition has taken to Kiev's streets to protest against the Ukrainian parliament’s decision. The rally brought together more than 3 thousand people and  turned into clashes with police firing teargas on protesters. Supreme Rada speaker Volodymyr  Lytvyn and his deputy Mykola Tomenko announced their resignation over the bill on Wednesday.

On July 3, the Ukrainian parliament, the Supreme Rada, passed a bill to give the Russian language official status in almost half of Ukraine’s regions. The vote on the bill was so intense that a fistfight broke out among lawmakers and protests have been called against the bill in Kiev. If the bill is signed by President Viktor Yanukovich, it will become law starting in January.

At the moment, Ukrainian is the only official language in the country. The new bill, however, will give Russian equal status with Ukrainian in schools, universities and state institutions in nearly half of Ukraine’s regions. Certificates, passports and other documents will have to be issued in two languages. The bill offers such a status to other languages as well, provided they are spoken by at least 10 percent of a region’s population. 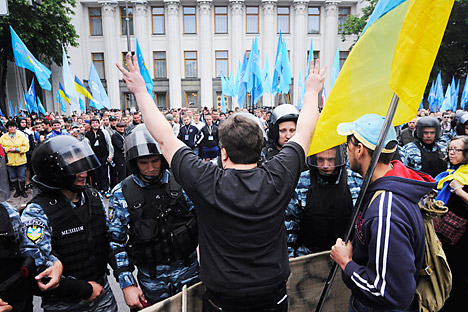 The Rada needed three attempts to pass the bill; eventually 248 parliamentarians out of 450 voted in favor of the law. The MPs representing the majority started applauding.

“The opposition tried to block the measure. They tore my shirt again. Some of my party fellows were injured slightly. They broke some microphones and chairs,” said Vadim Kolesnichenko, a Rada member from the ruling Party of Regions in an interview with Izvestia. “Yet, in spite of everything, the document has been passed and will appear on the President’s table in two or three weeks. Viktor Yanukovich will definitely sign it; I have no doubt. The law will come into effect starting 1 January 2013.”

Vladimir Fesenko, head of the Ukrainian Centre for International & Policy Studies Penta, calls the adoption of the bill a “tactical move” for the pro-presidential Party of Regions, whose electoral base includes millions of Russian speakers.

The expert also has no doubt that incumbent President Viktor Yanukovich will pass the bill.

Yanukovich pledged to boost the status of Russian to a second official language during his 2004 presidential campaign; even so, he admitted after his election in 2010 that he did not have enough supporters in parliament to get the amendment through at that time.

Leonid Slutsky, head of the Russian State Duma Committee for the CIS said the law on the status of the Russian language would encourage development of Russian-Ukrainian relations.

“The move will bring together our fraternal nations and allow millions of our fellow countrymen to breathe freely”, Slutsky said.

Vladimir Kornilov, Director of the Ukrainian office of the Institute for CIS Countries, says, however, that it is premature to consider the law a major victory for the Russia-speaking population of Ukraine, because Russian is yet to be given the status of a second state language.

“The language issue won’t be resolved until this has been done”, Kornilov said.

According to a recent poll by the Rating public opinion service, the Ukrainian population is split almost evenly over the issue of upgrading Russian to a state language: 46 percent of respondents are against such a move, while 45 percent are in favor; 8 percent remain undecided. Support for the move is primarily in the east and south of Ukraine, the home of most of the country’s Russian speakers. For example,  84 percent of respondents in the Donets Basin approved of the bill.

This article was compiled by reporting from Yanina Sokolovskaya (Izvestia) and Sofia Musich (RIA Novosti).