The Voice of Russia
Tatiana Zavialova 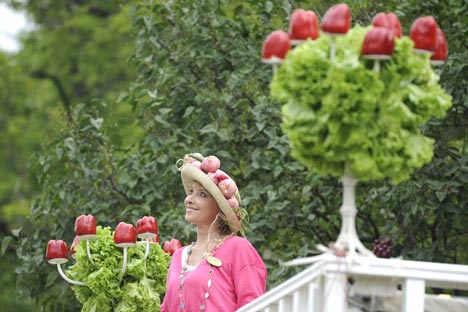 The 3rd International Music Festival of Asia-Pacific countries has just ended in Russia.

The 3rd International Music Festival of Asia-Pacific countries has just ended in the city of Krasnoyarsk located at the heart of Siberia. It ran from the 28th of June to the 4th of July. In total, 500 artists from 19 countries showed off their traditional culture and contemporary arts before the Russian audience.

The festival featured Vietnamese music, traditional Thai dances and Chinese musical instruments. It would seem that nothing could surprise the residents of Krasnoyarsk, the centre of a vast multicultural region where the Nents, Evenkis, Dolgans and a number of other ethnic minorities live. However, the audience greeted performances by the artists who came from every corner of the Asia-Pacific region with great enthusiasm and admiration. The performances showed off their talents both indoors and on open air stages. A huge red lotus blossom, which “bloomed” on the bank of the River Yenisei, impressed everyone. The inflatable blossom, which was created by a Korean painter Choi Jong Hwa was perceived by many as the symbol of the festival. He plants his lotus flowers all over the world.

The Krasnoyarsk Theater of Opera and Ballet interpreted the idea of gathering various national arts under one roof in its own way. It invited soloists of the world classical opera from various countries and with different operatic techniques. For example, Japanese Yuriko Nonaka starred in Madam Butterfly as a Japanese geisha. In fact, she is widely recognized as the world’s best performer of this role. But the choice of cast in the Russian opera Sadko was completely unexpected. According to the plot based on an ancient folk tale about a merchant and traveler Sadko, the parts of traders from India, Venice and Scandinavia were played by singers from South Korea and Mongolia. In an interview with the Voice of Russia, the theatre’s music director, Anatoly Chepurnoi said that Asian soloist would dominate the world’s opera scene in the near future.

“It is probably due to the fact that opera singing in the East is undergoing a period of renaissance. For example the first prize at the Tchaikovsky competition was won by a Korean singer. Or take for example, Mongolian singer Amartuvshin, he has a unique voice, which is amazingly beautiful. It’s no coincidence that he won the second price at last year’s Tchaikovsky competition. A few days ago, he returned from Beijing where he won the first prize of the Placido Domingo competition,” Anatoly Chepurnoi said.

Undoubtedly, classical music unites talented people across the world and helps them open up their talents to the world. But they should not forget their traditional cultures says director of the Sydney Opera Tom Woods who graduated from the Moscow Conservatoire. In an interview with the Voice of Russia, he said that unfortunately, Australia had lagged behind in studying the culture of its aboriginal peoples.

“Australia has “lost” the music of Aborigines. We only have paintings, musical instruments and some other things. In the 70s, composer Peter Sculthorpe travelled the Australian desert where he was able to hear some traditional songs of the aborigines. He recorded them and used them in his art, and I must say that they are quite impressive,” Tom Woods said.

Tom Woods and the Krasnoyarsk Symphony Orchestra presented an extremely complex programme a la Orient. Music from the Prince of the Pagodas ballet by English composer Benjamin Britten, which he wrote after visiting the island of Bali, was performed in Krasnoyarsk for the first time.