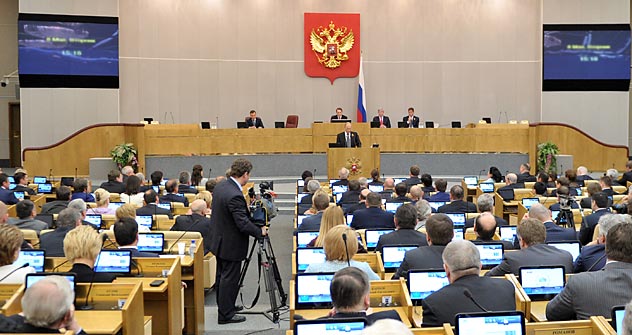 It remains to be seen wheather a bill on NGO will be adopted by Russia's State Duma. Source: RIA Novosti / Alexey Nikolsky

Russia's State Duma has passed a new bill on non-governmental organizations (NGOs) in the first reading. The bill will make some categories of NGOs operating in the country and receiving foreign funding register with the Justice Ministry.

The Russian State Duma has passed a bill that changes the status of non-governmental organizations that are engaging in political activities and receiving funding from abroad.

The bill suggests a radical change in the status of NGOs involved in political activities in Russia, including the creation of a register of all organizations receiving funding from abroad. The authors of the bill have designated such organizations as “foreign agents,” which does not mean necessarily that they are foreign spies, only that they are acting in the interests of a foreign state.

Duma Deputy Alexander Sidyakin, the author of the bill, is also responsible for the amendments to the law on rallies, which dramatically increased fines for taking part in unsanctioned rallies and protest marches, as well as public order disturbance. Sidyakin is sure that the new NGO bill will be passed as quickly as his previous initiative.

These “foreign agents” will have to undergo annual financial audits and issue biannual reports on their activities, while indicating their “agent” status in all of their materials. The bill also allows an extraordinary inspection of such organizations based on individual complaints or publications about manifestations of extremism in their activities.

Russia has more than 230,000 NGOs, about 30 percent of which are “dormant,” (non-operating). The Justice Ministry checks them once a year; however, essentially, there is no monitoring of their funding – where it comes from and for what purpose. According to research by Rossiyskaya Gazeta, for most of these organizations, 70 percent of the funding comes from foreign budgets, 20 percent from transnational corporations and the remaining 10-15 percent from private donors.

“The bill largely reproduces the standards of the relevant American legislation, but you have to understand that there is not a single prohibition in the document,” a source on the presidential staff who wished to remain anonymous told Rossiyskaya Gazeta. “Of the 230,000 NGOs we have now, only a few tens of thousands get money from abroad and most of these are not engaged in politics.” Only organizations dealing with politics will receive the “foreign agent” status. “We only introducing new civilized rules of the game, and an organization’s activities will be assessed on the basis of the results of its work rather than its declared objectives,” said the Kremlin source.

Duma to debate bill on nonprofit organizations on Friday

Veronika Krasheninnikova, Director of the Institute for Foreign Policy Research and Initiatives, who worked in the United States for four years as a representative of the city of St Petersburg, agrees that the law is analogous to American policies. Although Krasheninnikova was not engaged in politics, she had to be registered as a “foreign agent” and report on her activities on a regular basis.

In the U.S., such an “agent” has to report every six months, produce copies of all its contracts and even verbal agreements with its principal, its employer, Krasheninnikova said. “Naturally, it has to report on all the money it receives – amounts and expenditures.” The United States has even tougher punishments for those failing to comply with the law than required under the proposed Russian legislation – five years in prison in the U.S., compared to the fine required in Russia.

Director of the Gift of Life foundation Ekaterina Chistyakova is certain that her foundation will be designated a “foreign agent” should the amendments be approved, because it receives foreign funding, even though it is not a political organization. “Many former Russian citizens and those Russians who have foreign bank accounts make transfers to help cure children,” she wrote in her blog. Furthermore, the foundation has arranged and taken part in campaigns to promote decision-making by state authorities and shape public opinion. Chistyakova agrees with Panfilova that the law is excessive because charities are already subjected to monitoring. “Charities are already strictly controlled by the state and the public. Everyone can monitor all the money receipts on our website – from pensioners to students – as well as every expenditure in excel files and, additionally, there are articles explaining and justifying the spending," she said.

Many NGOs are concerned that any activity might be regarded as engaging in politics, because NGOs address problems the state has failed to solve; some of them take a critical approach and work to alter public opinion and the legislation. Forty-four organizations, including The Vladimir Potanin Foundation, WWF Russia, Moscow Helsinki Group, and Gift of Life foundation, have signed a petition protesting the bill.

The bill on NGO

The amendments will apply to NGOs receiving funding from abroad and engaging in political activities. The latter encompass attempts to influence decision-making by state authorities, including by way of “shaping” public opinion. A representative of such an organization would have to apply to the Justice Ministry personally requesting inclusion on the register of NGOs “performing the functions of a foreign agent” and then include a status note in all its materials. A fine of up to 1 million rubles will be applied to NGOs failing to provide the requisite information, and a three-year prison term may be imposed for gross violations.

Alexander Bryantsev, a lawyer at Levine Bridge law firm, is certain that the wording of the bill is more important than administration of the law. “The term they selected (“foreign agent”) reflects the state’s intent to characterize these NGOs as undeserving of trust,” Bryantsev said. “The status of foreign agent might be regarded as a sanction; however, it is not clear why this status should be applied to NGOs that comply with laws.”

Bryantsev continued: “At the current stage, the bill should be perceived as a result of political intrigues between Russia and the West, which objectively cannot be considered grounds for making such a reactionary decision at state level.”

Alexander Sidyakin, one of the bill’s authors, is certain that the initiative is indispensible. In an interview with Rossiyskaya Gazeta, he referred to the Golos association, which was actively involved in monitoring the parliamentary elections in December. Sidyakin notes that, in 2011, the organization spent $2 billion, much more than in previous years. “It is obvious that the money was used during the 2011 elections, to sling mud at all political processes in our country. The Russians have the right to know that this organisation performs the functions of a foreign agent,” Sidyakin said.

The text was compiled from reporting by RBC-Daily, Kommersant and Rossiyskaya Gazeta.