Time to get your tazik – cold-water week in Moscow 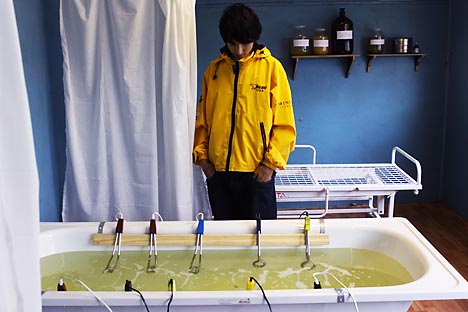 Being an ex-pat has made me realize that cultural exchange is as much about the minutiae of daily life as anything more philosophical.

As I was buying a pastry the other day I got into a conversation with a lady who, after I revealed I was English, excitedly told me there was something she’d always wanted to know about the country, and would I be able to answer it for her.

“But of course,” I reading, readying myself for questioning on some quaint and mysterious rite.

“Is it true you don’t have showers in England?”

“I heard that you don’t have showers there, only baths.”

“Oh” she said, and walked off, a clear look of disappointment on her face. I shrugged. A year ago I would’ve been a bit bemused that this was her burning question, but over time I’ve come to realize that the difference between Russian and British plumbing is quite a common topic of conversation.

I have not yet managed to convince a Russian that the British system of two separate taps for hot and cold water is superior to the Russian single lever.

My argument is simple; knock it a bit too far one way and you’ve got scalding hot water, go the other way and it’s unbearably cold. Two taps gives you absolute control over the temperature. Sure enough, in England the taps are often the wrong way round, with blue signifying hot and red being for cold, but this just livens things up!

No such arguments are possible for a certain period in mid-summer, when the hot water is temporarily turned off across Russia.

The news was broken to me by my ever bubbly housemate Sasha, who came breezing by with the news “there’ll be no hot water for 10 days.”

“What?” I said, incredulous, “you can’t just drop that bombshell and act like there’s no problem.”

“Oh it’s normal,” she said, “it happens every year. They’re repairing the pipes.”

Obviously I completely forgot, and stood like a lemon in the shower for a good five minutes while I thrust the lever hard over to the left, getting a weak stream of increasingly cold water.

The next day even this disappeared, being replaced by an aggressive hiss. The right side would only yield an icy torrent.

It turns out that this is a rite of passage for every ex-pat. After about five days of yelping my way through what I can only loosely term showers, I remembered the words spoken to me by an old hand, on my arrival in Russia; “with summer comes cold-water week.”

After seven days I was handed a ‘tazik’ by my housemate, a plastic bowl-bucket which is robust enough to take boiling water.

“Thanks for telling me about this earlier” I said drily.

“I thought you knew,” she said, with a scornful look that clearly indicated only fools wouldn’t use a tazik in times of no hot water.

On the 10th and final day, hair greasy and matted, I arrived into work to share my woes with a colleague. He was somewhat more sympathetic, sporting a healthy beard. His hair looked suspiciously clean though, so I asked him what his secret was.

“Just go to a friend’s house!” he said with a laugh. “Someone who lives in a different region of Moscow. You know, this water thing isn’t so bad, it’s an excuse to go see your friends.”

I grinned, thinking about how the Russians really can turn anything into an excuse for socializing. His words have been duly noted, and this time next year I intend to retire the tazik and see a different friend every day.