Savouring Sakha: The Beginning of Victories 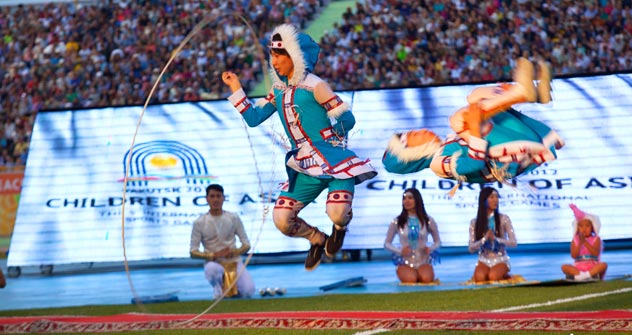 The Children of Asia tournament held every 4 years in the Republic of Sakha (Yakutia) gives the youth of various Russian regions and Asian countries international exposure and the opportunity to compete in a world-class sporting event.

On July 5, the opening ceremony of the 5th International games of Asia was held at the Yakutsk Tuymaada stadium with an inspirational opening speech by Egor Borisov, President of the Republic of Sakha. The tournament, which is being held simultaneously in 3 cities – Yakutsk, Mirnoye and Neryungri, - will go on until July 16. 28 teams from Asia-Pacific countries and 10 regions of the Russian Federation are participating in the games.

The tournament’s motto is “Children of Asia Games - the beginning of victories”. It aptly expresses the idea that the contest serves as a solid stepping stone for the juniors to future victories at Asian and world sports tournaments, as well as the Olympics.

The ceremony began with a fascinating performance by the Yakutian Diamond Circus, called by locals as “the most northern circus in the world”. After the Mamontyonok 2012 circus show, there was a customary march of the sports delegations from the participating countries. Loud cheers greeted the teams when announcements were made about the athletes’ achievements.

The teams ranged from the Games’ veterans like India and Kazakhstan to newcomers like Iraq, and from the imposing Chinese presence to the smaller delegation from Nepal. It was heartening to see the true sporting spirit uniting the children from various nations during the long ceremony.  Even an irritating drizzle that started with the first sounds of the Russian national anthem and later turned into massive rain didn’t reduce the excitement among the athletes and the spectators. The young athletes gave their solemn oath undeterred by the merciless element, and their cheerful voices echoed in every corner of the huge Tuymaada stadium.

After the sportsmen’s oath, in keeping with Yakut tradition, a horseman rode along the stadium to cast away the demons. This was followed by a performance of one of the legendary epics of the Yakutia: A spectacular portrayal of Elei Batoor’s voyage of discovery to find a land for the people of Sakha. As per the legend, after fighting the severe weather of the territory, including merciless cold and piercing winds, the founder finally settled down in this vast deserted space that was destined to turn into an abundant and prosperous region full of diamonds.

The dancers’ graceful and rhythmic movements showcased the thrill and suspense of the battle against the elements and the dignified victory of the hero so beautifully that I believe even modern cinema-goers used to action films with special 3D effects were mesmerized by this unpretentious yet powerful rendition.

Despite bringing a disruptive element into the otherwise spectacular opening ceremony, the unruly weather served as a timely reminder for the juniors bracing for the tournament that their road isn’t going to be paved with roses, and it takes enormous will power and tenacity to tackle all the obstacles and achieve victories.