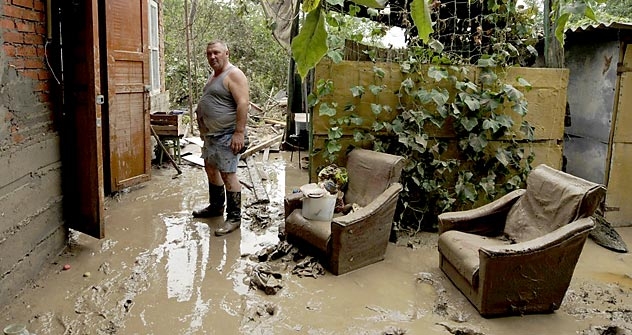 A huge flood in Krasnodar territory has had more than 170 people killed. Source: AP

President Vladimir Putin has issued a decree declaring July 9 a day of mourning throughout Russia in memory of the victims of a huge flood in Krasnodar Territory, which killed 171 people.

President Vladimir Putin has issued a decree declaring July 9 a day of mourning throughout the Russian Federation following the weekend's tragic developments in Krasnodar Territory. State flags will fly at half mast in Russia and also at Russian missions abroad. Cultural institutions and state-owned TV channels have been advised to refrain from showing entertaining programs.

The flood in Krasnodar Territory completely destroyed 96 houses and left 3,300 people without all their property, the press service of the southern regional center of the Emergency Situations' Ministry announced on Monday quoting early figures.

A total of 246 mixed working groups were operating in the disaster zone to evaluate the scale of the damage. They examined 10,232 houses.

The report noted that 479 people, including 48 children, sought medical assistance. Seven people were taken to the central hospital in Gelendzhik and 137 in Krymsk, 13 of them children.

Powerful rainfall on July 6 in the cities of Novorosiisk, Gelendzhik and Krymsk, the towns of Divnomorskoye, Nizhnebakanskaya, Neberdzhayevskaya and Kabardinka resulted in the flooding of 5,185 houses and affected 22,000 people. Over 170 people died.

The investigative department of the Investigative Committee for Krasnodar Territory launched a criminal case related to the massive loss of life during the flood under instructions from committee chairman Alexander Bastrykin.

Emergency Situations Minister Vladimir Puchkov said that residents were not fully alerted to the danger of the flooding.

"An immediate assessment suggests that although citizens were warned, ample work was not done. Errors were made by local governments and individual services," Puchkov said at an conference, when asked by Deputy Prime Minister Dmitry Medvedev why residents in southern Russia had not been alerted to the danger of flooding.

A huge flood in Krasnodar territory has had about 150 people killed and almost 2,800 evacuated

On Monday Russian Prime Minister Dmitry Medvedev will hold a conference on the current situation in Krasnodar Territory in place of a planned conference on preparations for the 2014 Winter Olympic Games in Sochi, located only 140 miles from the flood site.