Cadet schools get a makeover 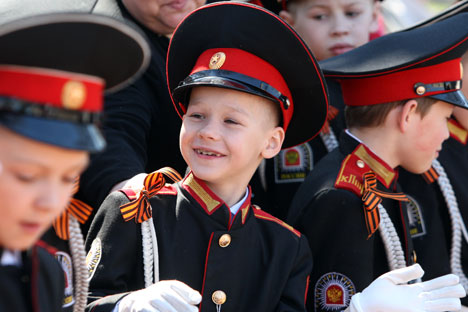 Russia's authorities are going to improve the training of cadet schools to make them like elite European boarding schools . Source: ITAR-TASS

Russia’s cadet schools have undergone a reform that makes them look more like elite European boarding schools than a training ground for future officers. Today they feature high-quality education, discipline and a uniform that has nothing to do with the military.

At one time, the huge fenced-in territory featuring historical buildings, a stadium and painted houses with fountains in the Urals city of Orenburg was the home of the Higher Air-Defense and Missile Artillery Command School. Today, however, it is the President’s Cadet School.

"I have a Major rank and I learned French at the Military Academy. I’m thinking about becoming a teacher at this school in the future,” said Sergei, standing guard outside the academy’s gate. He is far from the only Orenburg resident looking inside the walls for a job. The salary of a teacher at the President’s Cadet School is about 50,000 rubles ($1,500) a month – considerably higher than the average local salary of 20,000 rubles ($600) per month. And the students aren’t bad either.

"I love that after the two years of training, their main impression is ‘we feel like studying’,” said school mistress Tatyana Mashkovskaya. “We do not force them to do anything specific. The choice is theirs.”

In addition to a complete course of liberal arts, cadets can choose to take part in many optional studies, including drawing and constructing 3-D models. In the summer, students can take study trips to Moscow, St. Petersburg and Europe.

But of course the school is not only about educating the mind. Although the cadets do not engage in marching drills, Mashkovskaya says there is plenty of emphasis on physical training. The Orenburg school has nine gyms, a swimming pool and six tennis and gymnastics courts.

Although the place where the cadets live is called barracks, it does not at all resemble a traditional dormitory for soldiers. The quarters look like apartments for two people: They include a big bedroom with two beds, an LCD TV and desks with laptops, a dressing room and a bathroom.

Alexander Vladimirov, the chairman of the All-Russia Union of Cadet Associations questions the use of the word “cadet” in describing the Orenburg students. "Are they really cadets? They have never worn a military uniform in their lives! They have never had a marching drill! They can barely assemble an assault rifle! It becomes clear at every general meeting that they are significantly inferior to the cadets of other genuine military schools,” Vladimirov said.

The Orenburg students themselves are not in a particular hurry to march on a parade ground. Over a lunch of cheese fritters with sour cream, cadet Nikita Skubaka said that although he could, of course, choose a military career, he has already decided to become an artist. Kostay Scherbakov said he plans to do military service for a couple of years and then switch to a career in the sciences.

With no emphasis on military training and no direct pipeline into the military, it is unclear why schools like the one in Orenburg are called cadet schools. Possibly the reason is simply that the word “cadet” appealed to former President Dmitry Medvedev, who decided to establish such a school in each federal district in 2009.  The Orenburg school was the first to open, followed by one in the southern city of Stavropol. In September, cadet schools will be opened in Krasnodar and Tyumen, with plans to eventually open another four: in Vladivostok, St. Petersburg, Moscow and Irkutsk.

As the first cadet school, the Orenburg academy sets the reputation for the concept, and thus far it has been mixed. Although the facilities are beautiful and the education top-notch, the admissions process has been a source of scandal. At the end of August 2010, just before the school opened, hundreds of parents dissatisfied with the results of entrance examinations rallied near the academy. Although initial statements said that the academy would have an enrollment of 500, only 360 students were admitted. Rumors as to the terms of admission were rife – many claimed that admission was determined by bribes, not by scores on the entrance exams. Additionally, although an announcement had been made that preference would be given to orphans and children of military families, some applicants felt this distinction was unfair. "I scored 16 points,” said 15-year-old Mitya. “And my neighbor had only 12 points. He was enrolled, and I was not, because he is an orphan and lives with a foster parent, but I am a usual boy who has a mother and a father.”

Medvedev seemed happy with the school during a visit in September 2010, calling it a "real rather than fake investment.” The then-president presented a photo-laboratory to the school and promised to provide support to them in all possible ways. So far, he has kept his promise.

This story is published in abridged form. The original version is available in Russian at Kommersant Dengi.