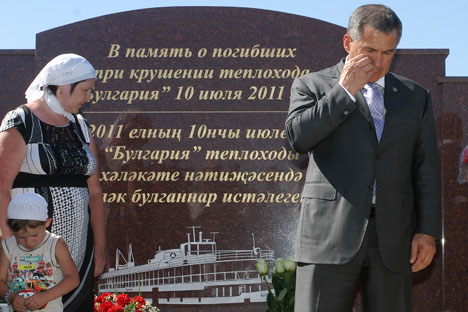 Tatarstan's President Rustam Minnikhanov (left) mourning the victims of the Bulgaria riverboat crash near the monument in the village of Syukeyevo. It includes an Orthodox church, a mosque and a marble slab bearing the names of the victims. Source: I

One year after the sinking of the Bulgaria cruise ship, has anything changed to make river travel safer?

On July 10, Russia remembered the victims of the riverboat Bulgaria, which sank on July 10, 2011 in the Kuybyshev Reservoir, killing 122 people, including 28 children. On the anniversary, Russian transportation watchdog Rostransnadzor published the results of a complete inspection of Russian riverboats conducted after the tragedy. One in four boats failed to comply with the requirements for making river cruises.

The Bulgaria: An underwater city of the dead

“As of today, we can’t say that any of the boats have been decommissioned. They all continued to operate once the defects were put right. Every owner spent varying amounts of time on preparing their boats for cruises – from a few hours to a few weeks,” said the press service of Rostransnadzor. The most common violation was the failure to carry enough lifesaving devices. Another common error was that the actual condition of the vessel did not correspond to the paperwork describing the boat and its equipment.

A Rostransnadzor commission concluded that the Bulgaria sinking was caused by a combination of factors – the failure of the boat owners and captain to comply with the safety regulations when planning and preparing for the cruise and during the cruise itself, and a poorly trained, undisciplined crew.

A criminal case was opened on the sinking of the Bulgaria and so far dozens of examinations and about 1,000 interrogations have been carried out. Five people have been charged with criminal offenses, including Captain Ramil Khametov, Svetlana Inyakina, whose company leased the Bulgaria, and Russian river register expert Yakov Ivashov. The investigation has been extended until Nov. 10, 2012.

The double-deck, diesel-electric riverboat Bulgaria, built in Czechoslovakia in 1955, sank during a storm in the Kuybyshev Reservoir in Tatarstan, just over a mile from the shore. The ship was carrying 201 people, 79 of whom were rescued. The confirmed death toll is 122 persons, including 28 children.

This story is based on materials by RIA Novosti, RBC, Primetime and Vzglyad.

Timeline: The sinking of the Bulgaria

July 9, 2011 – the cruise starts. The Bulgaria set sail listing to the right and with a dead right engine. The boat was overloaded – it carried 201 people, while its permit allows only 120. Furthermore, the crew had not emptied the sewage containers (30 tons) prior to the cruise, in violation of the rules.

July 10, 11:15 a.m. – the boat left from Bolgar and headed for Kazan. A storm began on the Volga River and the boat was caught in a gale; two hours later, the Bulgaria listed sharply to starboard, and water rushed in through open portholes near the water line.

July 10, 11:17  a.m. –The interior flooded rapidly and the Bulgaria capsized and sank in just two minutes. Trying to save the boat, the captain drove it to a sandbank, but the Bulgaria sank 160 feet from safety because only one engine was operating.

July 10 , 12:17 p.m. – Two ships passed by the survivors on life rafts –the freighter Arbat and the barge and pushboat Dunaisky 66; however, the ships did not stop to help the victims. An investigation later revealed that the stopping distance for the two boats exceeded 1.2 miles and the motors required them to stay at least 1,600 feet away from the people in the water.

July 10, 2:30 p.m. – The Arabella cruise ship arrived at the scene and rescued 79 passengers of the Bulgaria, who were delivered to Kazan.