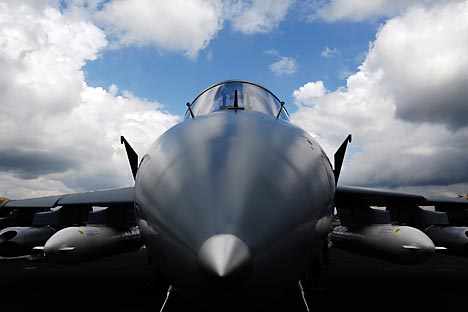 Yak-130 – one of the most successful Russian combat aircraft of recent years - is also flying in Farnborough, among other Russian aircrafts. Source: Reuters/Vostock-Photo

The Farnborough International Air Show is an important event for the aerospace industry, but not for Russia. Russian aviation usually gets most of its exposure at Asian forums.

The Farnborough International Air Show which has just opened in Britain is an important event for the aerospace industry. For Russia, Farnborough has never been “the main event”. Russian aviation usually gets most of its exposure at Asian forums. However, today the issue of correcting the direction of the Russian aviation industry is becoming more and more significant.

Talks about future cuts in exports of Russian combat aircraft are now accepted in a calmer way than 5 or 7 years ago. The internal Russian market is becoming the main site for Russian combat aircraft manufacturers more and more, and this will most probably be the trend in the future. The main reason for it is the fact that the Russian Defense Ministry – specifically the Russian Air Force – has established itself as a reliable long-term customer. The number of aircraft already ordered for the Air Force is close to 400, with 70 already delivered. The total number in the current decade is expected to be 600.

At the same time there are a number of problems that cannot be solved exclusively by means of the military air industry. “Resource” aircraft – transportation and passenger planes designed to operate for thousands of hours – have long since become the main revenue item for the largest Russian aircraft manufacturers. Today, having in the product line a family of high-demand civilian planes gives the aviation industry much more economic, technological, and personnel stability than any possible defense order.

Yet unlike the combat aircraft market, the internal purchases are not sufficient for steady development – for normal volumes of production and sales, the goods should be in stable external demand.

Under such conditions, air shows including Farnborough are the place to show off goods to their best advantage. As of now there is not much to show – only the Superjet. The first MC-21 is expected by 2015. It should be noted that Russian civilian aircraft has not yet acquired the reputation to be able to get a share in the volume of purchases of the leading international air companies. Failures like the SSJ-100 crash in Indonesia in May have not helped in trying to making a name for the industry again. And here the air industry needs state support both in the form of “sponsored” purchases and in the way of lobbying domestic products at the external market using diplomatic and economic tools.

Practically the same can be said about transportation aircraft. In order to restore large-scale manufacturing of cargo aircraft, it is necessary to have orders from commercial companies and not just military purchases. Large orders for domestic air companies sponsored by the state or preferential contracts for friendly foreign customers might serve as a “starter” here. The ultimate goal shall be creation of a competitive aviation industry; the state support shall not make up for insufficiently high flying and technical qualities, low commercial effectiveness, or lack of modern service structure as it often happened in the past.

So far there is a Yak-130 flying in Farnborough – one of the most successful Russian combat aircraft of recent years – as well as a SSJ-100. They are the first signs of the new generation of Russian civilian aircraft. Talk about any multi-billion contracts for Russian aircraft won’t be heard at this air show, but it is vitally important to build an image, to expand contacts, and to promote. In this context it is really upsetting that the Russian Knights aerobatic team were not able to make it to Farnborough.

There are no minor problems in aviation and it is not so much that effective SU-27 flights were to convince somebody of something, but it is yet another example of either negligence or unwillingness of many Russian officials to do their job properly and to bear responsibility. Until this changes, such air shows as Farnborough merely lead to wishful thinking.