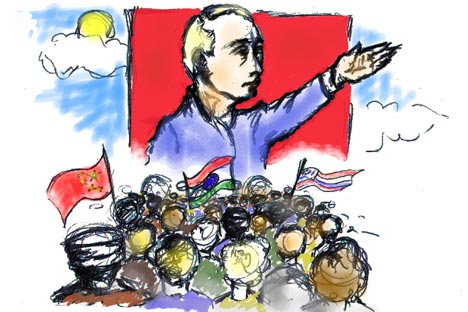 Putin viewed the current tensions not as a case of isolated events but as the manifestation of a transitional phase in the international system.

The address by President Vladimir Putin at the meeting of Russian ambassadors in Moscow on Friday was his first major speech on foreign policy after returning to the Kremlin as president for the third term. For that reason alone, the speech will be closely studied.

Indeed, the international situation is on the boil and Russia happens to be everywhere – the “hotspots” of Syria, Iran and Afghanistan or in the intriguing pantomime being played out in the Asia-Pacific. Even as Putin spoke, warships of three Russian fleets – Northern, Baltic and Black Sea fleets – were setting off on a voyage to the Mediterranean and alongside Moscow was hosting yet another delegation of the Syrian opposition.

Putin repeatedly drew attention to the gathering storms on the horizon. What makes the speech particularly interesting is that Putin viewed the current tensions not as a case of isolated events but as the manifestation of a transitional phase in the international system. The thrust of his speech was of course on the challenges that lay ahead for Russian diplomacy in steering an independent foreign policy.

Putin underscored once again that the region comprising the former Soviet republics would form the core of the Russian foreign policy. He emphasized the integration processes in the CIS space leading to a common market. The Customs Union – Russia, Kazakhstan and Belarus – will be the “driving force” of integration leading to the establishment of the Eurasian Economic Union with a market of nearly 170 million people providing for common economic legislation and free movement of capital, services and labor.

Putin was candid in expressing disappointment that Ukraine opted to stay out of the Custom Union, but he wouldn’t regard this as the last word on the matter. He harped on Ukraine’s centrality in the integration processes and essentially left the door open for “all possible forms of cooperation” and the “most suitable means of working together.”

All eyes will now be on the outcome of Wednesday’s meeting between Putin and President Viktor Yanukovich at Yalta with the focus on resolving the issues of Russian supplies of gas to Ukraine. Much preparation went into the talks at Yalta with Prime Minister Dmitry Medvedev and the chief of staff at the Kremlin Sergei Ivanov visiting Kiev last month.

Indeed, Ukraine’s integration would burnish the gravitas of Putin’s Eurasian Union project, which he highlighted during his election campaign as his top foreign policy agenda, and conversely, without Ukraine accession, the integration processes will remain sub-optimal. In strategic terms too, Ukraine straddles the fault line in Russia’s troubled relationship with the European Union [EU] and its choices would have a major bearing on the co-relation of forces in Eurasia.

Yet, Yanukovich keeps his cards close to his chest; in his last major speech in the parliament in Kiev recently, he bracketed Russia, United States and China almost in the same breath as Ukraine’s three key strategic partners.

Euro-Atlantic integration is Ukraine’s declared foreign policy priority but in practice Yanukovich keeps strong ties with Russia. However, the Eurozone crisis provides a window of opportunity for Russia as Ukraine’s entry into the European Union will remain in limbo for the foreseeable future. Besides, the West’s ties with Ukraine have hit a snag lately over the acrimony concerning the democratic regression in Kiev.

Putin attributed the second highest priority in foreign policy to Russia’s relations with the Asia-Pacific region, which he visualized as “becoming a new centre of global development.” Putin co-related the region’s economic dynamism with the development of Siberia and the Russian Far East.

He stressed the relations with China in exceptional terms, which assumes great significance in the contemporary global politics with both Russia and China finding themselves at loggerheads with the US. Putin said, “Strategic and practical cooperation with China is a major priority.” He called for the deepening of “all forms of cooperation” with China, “including coordination of our efforts on the international agenda.”

Significantly, India was the only other country that Putin singled out as special for Russian foreign policy – “our longstanding partner and friend.” (The United States has just designated India as the “lynchpin” of its own Asia-Pacific strategy.)

A most notable vector of Putin’s speech related to Russia’s testy relationship with the United States. He expressed hope that two countries could develop a pattern of “constructive, predictable and mutually beneficial bilateral cooperation” and voiced support for “on-going and trusting dialogue.” But he bemoaned the recent hardline statements by the US side, “playing on old ideological stereotypes and phobias”, which he nonetheless was inclined to set aside as largely grandstanding in the hothouse of US domestic politics, although US articulations would impact the international situation.

Putin specifically warned against the US’ missile defence system and the incipient moves in the Congress to replace the Jackson-Vanik amendment with new “anti-Russian law”.

The most absorbing part of the speech was probably Putin’s analysis of the factors underlying the “fast-changing situation” in international relations.

On the whole, Putin drew a grim picture, saying the international situation is becoming “tenser and more uncertain” with the scope for trust and openness often lacking.

He traced the root cause of this to the economic crisis in the West, which has eroded the leadership role of the “traditional powerhouses of global development – USA, EU and Japan.” He saw the present economic crisis as merely the tip of the iceberg and estimated that there is no end in sight for the West’s economic malaise that emanates out of “unresolved structural problems” and the absence of new development models.

Against the backdrop of the prolonged crisis in western capitalism, Putin cast the “contradictory and unbalanced” reform process in the Middle East and North Africa (read Arab Spring) as a concerted campaign by the West to perpetuate its dominance in those regions. He said:

“The traditional Western economic powers are being weakened by the crisis, which has exacerbated social and economic problems in the developed economies, and by the multi-vector nature of global development… consequences of these tectonic shifts in the global economy are not yet clear, nor are the inevitable shifts in the international balance of power and in global policy that will follow.

“We are all the more worried when we see attempts by some actors in international relations to maintain their traditional influence, often by resorting to unilateral actin that runs counter to the principles of international law. We see evidence of this in so-called ‘humanitarian operations’, the export of bomb and missile diplomacy, and intervention in internal conflicts.”

In sum, the big picture is that it is only though collective efforts and peaceful negotiations that solutions can be found for problems such as North Korea, Iran or Afghanistan; and, “compromise solutions should become the imperative in general in international life.”

Putin reiterated Russia’s resolve to oppose a Libya-like scenario in Syria and to be “more energetic in promoting the indisputable priority of political and diplomatic means,” in opposing “unilateral sanctions” and in ensuring that all outside intervention in conflict situations should be strictly based on the mandate of the United Nations Security Council.

Putin spoke in a measured tone but the warning bells are ringing that Russia’s relations with the US and the West are entering a highly unpredictable and problematic phase. He warned the Russian envoys to be vigilant about influencing situations where Russian interests are directly involved and to “pre-empt developments.” And he openly forewarned them to “be prepared for all possible turn of events, even the most unfavorable scenarios.”

He went to great extents to underline that the Kremlin’s primacy will be on playing an effective role on the world stage through Russia’s “soft power”. No Soviet-era confrontations here, no proxy wars there. Russia will be wary of the West’s booby traps. But Putin pointed out that there is huge scope to be on the “right side of history” by upholding the principles of international law in international relations.

Amongst others, he mentioned BRICS, Shanghai Cooperation Organization and G-20 as forums where Russia intends to be active – forums where, by the way, India too participates.

Clearly, Russia is determined not to allow a replay of the West’s cold-war era strategy of casting Moscow as the antithesis of freedom, democracy and human rights and thereby deflecting attention from the core issues of unilateralism and the use of force, but under the garb of humanitarian intervention, in international relations.

Plainly put, Russian diplomacy will strive to expose that there is no ideology involved in theatres such as Syria or Libya, but only a crude exercise of military might by some powers which have been historically dominant in the region, who are now in inexorable decline and, understandably, desperate to perpetuate their hegemony in the world order and their control over the world’s scarce resources at a transformational period when other powers are emerging rising the tide of history.