Russia to resume production of IL-76

The Voice of Russia
Valeriy Kashin 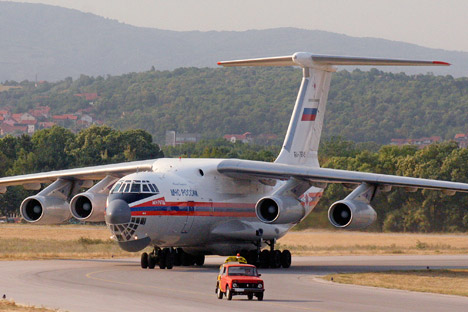 In the USSR, the Ilyushin Il-76 heavy transport airplanes were assembled at the Tashkent aviation plant. Moreover, about 90% of all components were manufactured in Russia. The same organization of production was maintained in the post-Soviet period. After Uzbekistan announced its independence, the Tashkent aviation plant fell into decay, losing its skilled personnel and production capacities.

In 2005, the degradation of manufacturing in Tashkent led to the breakdown of a large Russian-Chinese contract for supplying 34 Il-76 aircrafts and four Il-78 air tankers based on the Il-76 to China. In 2010, the enterprise filed bankruptcy proceedings, and in June 2012 it ceased production of airplanes.

Three aircraft in one

After the failure of the contract in 2005, Russia got down to transferring the Ilyushin Il-76 assembly line to its own territory at the Aviastar plant in Ulyanovsk. This enterprise has extensive experience in the production of heavy aircraft; the Soviet serial Antonov An-124 heavy aircraft were previously released there. At the same time, works were conducted in order to create a new modification of the Ilyushin Il-76 with better characteristics. The first aircraft of this type produced in Ulyanovsk has already been submitted for testing. The Ilyushin Il-476 retains external similarity to previous modifications of the Il-76, but its systems have undergone a serious upgrade. The aircraft is equipped with four new engines of higher efficiency, its payload is increased from 47 to 52 tons, and its flight range is 5,000 kilometers. The plane was equipped with a new control system and a new cabin.

Today the Xi'an Aircraft Industry Corporation is busy developing the aircraft and preparing for its production. The Chinese plane’s weight will be approximately the same as the Il-76, or a little bit heavier. It is expected that already in 2012 the Y-20 will make its first flight. The possible date of take-off will be coordinated with the 18th Congress of the Chinese Communist Party.

In the coming years, Russia and China may ink a new contract for the supply of Ilyushin Il-476 heavy military-transport planes, which will form the basis of the Chinese transport air force before it adopts the domestic Y-20. In addition, China may be interested in Russia's tanker aircraft. It is known that the Chinese air force has increased the number of air-refueling exercises. Meanwhile the Chinese tanker aircraft on the basis of the H-6 bomber does not quite meet modern requirements.

At the same time, China continues to develop the Y-8 transport aircraft at the Shānxī Aviation Industrial Corporation. These aircraft, based on the Soviet Antonov An-12, cannot compete with the Ilyushin IL-76. Their payload is much smaller and totals only 20 tons. However, with the help of this airplane the Chinese can successfully expand on the world market. Nowadays, hundreds of Soviet Antonov An-12s are still flying all over the world, even though production of these planes has been terminated both in Russia and Ukraine.