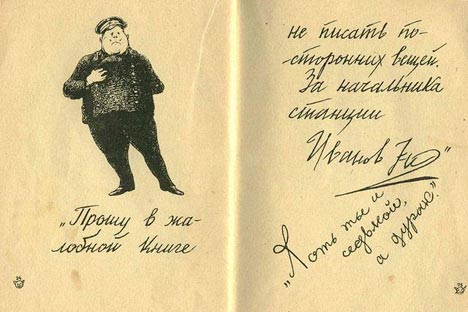 One of the pictures with Chekhov's illustrations posted on Facebook.

An informative fan page on the social networking site helps attracts a slew of new visitors to the Moscow museum.

I have passed by it hundreds of times. I even went inside once. But I had no idea that the Chekhov Library located at 8 Strastnoi Bulvar was such a fascinating place.

That realization dawned on me slowly over the last few months. Increasingly so after I became a fan of the library's Facebook page, surely one of the most cultural on that social network.

Chekhov’s tryst with the ‘paradise’ island in the Indian Ocean

The page was established in February 2011, but it emerged earlier this year as a veritable smorgasbord of information and images from the world of art, theater, literature, architecture, music and cinema. It now provides links to videos of poets reciting their work, excerpts from films created by featured directors, even of a flash mob acting out Grieg's "Peer Gynt" in the Copenhagen metro. There are announcements of lectures, readings and signings at the library and postings with interesting historical information, including birthdays and other anniversaries of prominent or not-so-prominent artists.

But what has really established the library's reputation on Facebook — it now has well over 2,000 fans — are the fascinating photographs that the library's director Vera Murzinova puts up in thematic blocks several days a week. In recent days she posted sketches of actresses who played Shakespearean characters in London in the mid-19th century, and a series of photos of sculptures in the gardens at Tuileries in Paris.

Russian-born, France-based artist Marc Chagall and Mexican painter Frida Kahlo were both honored last week with postings of photos, art reproductions, videos and informational texts. The occasions were the 105th anniversary of Kahlo's birth on July 6 and the 125th anniversary of Chagall's on July 7.

But while Murzinova has Catholic tastes and does a fine job of casting a sometimes eccentric eye on developments in world culture — see, for example, contemporary British artist Jonathan Wolstenhome's humorous "people books" posted in May — she usually focuses on Russian culture. In all, she has posted approximately 1,500 photos — the vast number of them being unique, if not rare. Not surprisingly, many of the posts involve Chekhov, his plays and productions of them, but Russian culture in general is followed closely here.

"Some of the photos are from our holdings and some are from the Internet," Murzinova wrote me by Facebook mail. "My searches on the Web are made easier by our publications, catalogues and guidebooks."

What caught my eye and made me a fan was a series of photos of old Moscow that were posted in April. Surely the saddest was taken in 1938 after the historic Strastnoi Monastery was razed to the ground to make way for what we now know as Pushkin Square. Alongside that shot is a gorgeous image from 1930 that shows the area as it was when the monastery and a nearby church were still in place. The Chekhov Library, known to its fans as Chekhovka, is facing what used to be the backside of the monastery.

If this Facebook page is not enough, Murzinova has also created an informative website, chekhovka.ru. Here you can follow all the library's events, as well as read about the history of the building in which it is located. Originally built at the end of the 1880s, it was a film theater before the revolution and then became the Latvian Club of Political Immigrants in1919. The Latvian Club opened a theater called Skatuve and a library on its premises, all of which lasted until 1938, when all but the library fell victim to the purges.