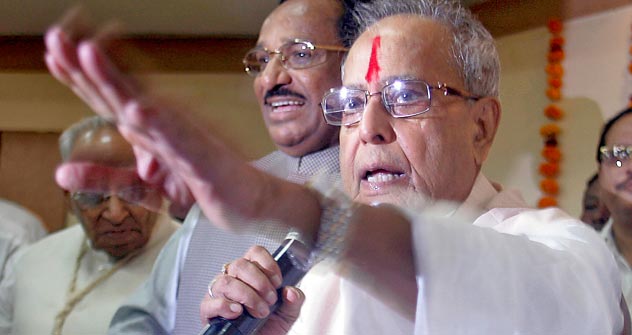 The keenly contested presidential elections in India could spur changes in the country’s political system.

India is due to elect a new president on July 19. In years’ past, the election of a president was an important, but in many ways, ritual event. Considering the functions of the head of state, we now witness a dramatic situation that is expected to have a serious impact on Indian society.

The race among the contestants for the presidential power is taking place even as signs of economic difficulties are becoming more and more apparent. The conventional wisdom in India is that its economic problems begin if its annual growth rate falls below 7 percent. This is a clear and realistic target set by both the government and the opposition. In the opinion of Prime Minister Manmohan Singh, 7 percent is the necessary political minimum level at which Indian society can regenerate itself without significant social conflicts. At present, experts are calculating a growth rate of 6.5 percent and there is a sense that the country will not be able to make up for the missing percentage points.

In assessing the pattern of social and political development in India, Russian India scholars have always focused particularly on the way the country’s party system functions. The Indian National Congress (INC) and the party system have been the Alpha and Omega of life in the country. The ongoing diversification of Indian society and the continuing fragmentation of the polity, pose challenges for the INC, which has had a special role in the country’s political system.

Prominent journalist and sociologist Pran Chopra compared the dynamics of the INC’s social base to a big, snow-covered Russian spruce tree. The snow gradually falls off and the branches are left bare. The branches are now bare for the INC and the party no longer presents a pristine picture, but rather one that is greatly enfeebled.

Both key political parties, the INC and the BJP, are weak in the all-India political space. In the latest elections in 2009, Congress won 28 percent of the vote. Global experience shows that, in a two-bloc or a two-party system, for society to remain stable both parties must between them win at least two-thirds of the vote. Then they can attract allies, manipulate small and medium-sized parties and bring pressure to bear on them.

Obviously, the process of fragmentation and diversification of the party system in the country began back with the 1967 elections, when the INC suffered its first major setback, though the party remained in power. After an interval of ten years, Congress, encumbered by the vicissitudes of emergency law, lost its monopoly on power for the first time. Since then, we have seen acceleration in the process of fragmentation of polity and the emergence of a new system.

In 2012, as in 1996, we see a government without an outright majority. That is a reality that no political manoeuvring, however sophisticated, can change.

The trajectory of the regrouping of social and political forces in modern-day India is much more complicated than similar processes in “enlightened” Europe. The drama of Indian development is a fair reflection of how fickle and intricate a process it is.

In Germany, Italy and Austria, if not a two-party, a two-bloc system exists or is emerging. That system by and large suits the bulk of the population, for all the criticism of the authorities. In India, a more complicated and contradictory political picture is emerging, one that differs markedly from European “standards.”

In 2009, the INC was able to cling to power largely because the most active part of the electorate, representing the middle class, decided to leave well alone. The two main political parties between them won less than 50 percent of the votes: 28 percent (INC) and 18 percent (BJP). At the same time, in the 2004 elections, regional parties won 37 percent of the votes polled. The trend towards dominance by regional forces was reaffirmed in 2009, when more than 36 percent of the voters, i.e., more than a third, said they would not vote for any of the big parties because they did not suit them.

Meanwhile, M.J. Akbar, a leading intellectual nurtured by the INC and Indira Gandhi, noted shortly after the 2009 elections that one should not over-dramatise India’s domestic political situation. He predicted that the 2014 elections would be a “semifinal” in the development of the party system (to use sporting terminology), while in the next elections, in 2019, the political processes would be put on an even keel and the two-bloc system would reach “the finals,” i.e., would materialise to become effective.

Yet the formation of the mechanism for interaction among different social forces does not depend solely on the logic of development of the party system. As time goes on, Indian voters are becoming more demanding, especially the underclass, i.e., all those who are below the middle class in the social hierarchy. In the last 30 years, these groups have been living through a process of political socialisation and accelerated internal political development. They are naturally demanding their slice of the national cake. Herein lies the main problem of the Indian political process. The Indian middle class is 300 million-strong. But the Indian underclass, which is moving from a state of passivity to one of organised activity, numbers 500 million, less the poorest strata. The regional and sub-regional parties partly advocate the interests of this motley community.

Of late, the process of administration in the country has been somewhat dysfunctional. One sometimes gets the impression that nothing can be decided at government level: the government makes promises but is powerless to do anything. The paralysis of government that is afflicting India indirectly reflects a newly-born consequential trend: the dramatic awakening of the Indian underclass.

Alongside that process, however, the institution of the presidency is growing stronger, as influential forces in society seek to preserve the unity and territorial integrity of the country and strengthen “from the top” the political institutions of government that are in a state of flux.

The process began, of course, before the dramatic events of 1975, when President Fakhruddin Ali Ahmed sought to avoid introducing the State of Emergency. At that time, the will, the authority and the passion of Prime Minister Indira Gandhi prevailed. The President had to yield.

The second stage in the development of the presidency, in my humble opinion, came during the tenure of Ramaswami Ventkataraman, from 1987 to 1992. During this five-year tenure, there was a succession of four prime ministers: Rajiv Gandhi, Vishwanath Pratap Singh, Chandra Shekhar and Narasimha Rao. This was unprecedented for India, with a party and political system that is stable even by Western standards. Venkataraman was even then trying to act as broker between various social and political forces and the parties that represented them.

In the early 1990s, the period of vigorous economic growth began. Manmohan Singh’s reforms rendered growth sustainable and, by the early 2000s, it hovered around 7-8 percent, sometimes rising to 9 percent. Vigorous economic growth temporarily damped down social conflicts. Nevertheless, the private-property classes are becoming more diversified and the contradictions of capitalist development, temporarily obscured by economic growth, which is not an eternal phenomenon even in Japan and China, are coming to the fore again.

Why does Prime Minister Manmohan Singh insist on 9 percent economic growth? Because 9 percent equals 7 plus 2. According to leading economists, in a transitional society, the minimum, politically safe rate of growth cannot be less than 7 percent. The lack of politically necessary growth underlies the drama of the situation we are observing in India and elsewhere.

The following factors compound the gravity of the internal political crisis.

First, some members of the elite want to change the government, blaming it for the “natural” developmental contradictions India is experiencing, probably because it has stepped too zealously into development of the world economy. As a result, many problems that India managed to avoid thanks to its self-sufficiency and self-reliance are now manifesting themselves in an open and dramatic manner.

Second, the issue of the relationship between the institutions of the presidency and the prime minister will not go away. Will these two institutions come to duplicate each other’s functions? How will they manage to get along if economic growth slows down continuously? In this writer’s opinion, an institutional/evolutionary mode of reforms, allowable when economic growth has high inertia, is no longer sustainable. It is a commonplace that initially any reform adversely affects large sections of the population. Who, among the Indian elite, is ready to risk his political career on the eve of the elections? Hence the “suspended animation” that is in some ways similar to the Russian situation. Not surprisingly, the Indian opposition leaders seem to be ready to concede the institution of the presidency to the INC in order to make it responsible for further reforms. Then, in 2014, it would gain the upper hand over the INC in the next parliamentary election.

Third, whoever becomes the president of India must be an experienced person who commands authority among various social and political strata. One can expect the Indian political class to display common sense, as it has before. The new candidate will match the new role of the presidency institution in society and that political figure will bear the burden of responsibility for continued reforms and for restoring the coveted economic growth target (seven plus two).