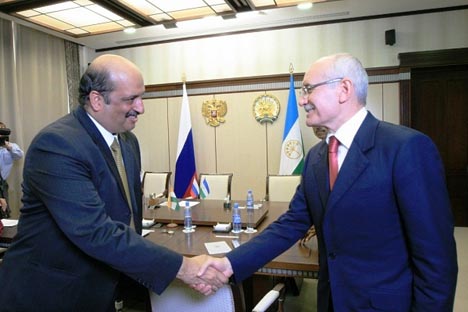 Ajai Malhotra, the Ambassador of India to Russian Federation and Rustem Khamitov, President of the Republic of Bashkortostan. Source: Press Photo

Ambassador Ajai Malhotra and President of the Republic of Bashkortostan Rustem Khamitov agreed on India’s participation in the Third “Big Chemistry” International Forum and discussed the organization of an Indian Film Festival.

Ambassador Malhotra met with Rustem Khamitov, President of the Republic of Bashkortostan, Russian Federation, at the Presidential Office in Ufa. Both sides expressed satisfaction that India has long-standing and close ties with several institutions and organizations in Bashkortostan. Two way trade between Bashkortostan and India is presently US$ 250 million per annum and prospects for intensifying trade and economic cooperation in various fields was discussed, including in fields such as chemicals, pharmaceuticals, textiles, consumer goods, metals, aircraft engines, and oil & gas. It was agreed that India would participate in the Third “Big Chemistry” International Forum to be held in Ufa in May 2013. It was also agreed to further expand cooperation in culture and tourism and explore the opening of an Indian Cultural Centre in Ufa. 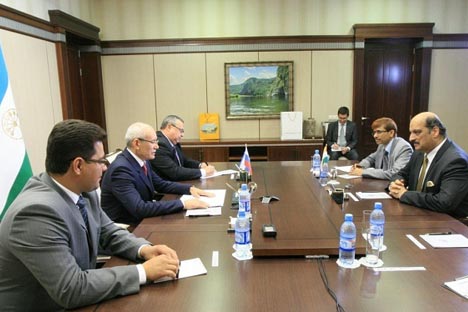 Ambassador Malhotra also met with Salavat Sagitov, Deputy Prime Minister of the Republic of Bashkortostan, and Kamilya Davletova, the Acting Minister of Culture. Deputy Prime Minister Sagitov shared that Indian dance, music, yoga and films are very popular in the region.  Both sides discussed the organization of an Indian Film Festival in Ufa in September 2012. A set of Hindi movie DVDs was presented by Ambassador Malhotra for screening in Ufa.

The Ambassador also had fruitful discussions with the Governing Body of the Ufa City Administration and thanked the local authorities for the support accorded to the ICCR sponsored Nizami Brothers Qawwali Group that toured Ufa in April 2012.

Ambassador Malhotra visited the Ufa Engine Industrial Association (UMPO), which India has partnered since the mid 1960’s. Ambassador Malhotra and UMPO General Director Alexander Artyukhov expressed satisfaction over the long standing cooperation between UMPO and HAL. India is the biggest buyer of aircraft engines from UMPO and its deliveries to India amounted to 34.2% of its total exports in 2011.

The Ambassador visited the Bashkir State Medical University in Ufa. He was received by Dr. Valentin Pavlov, Rector of the University, Mr. Alfis Gayazov, Minister of Education of the Republic of Bashkortostan, Mr. Ruslan Mirsayapov, Head of the Department of External and Inter-regional ties of the Presidential Administration of the Republic of Bashkortostan, and senior University staff. Ambassador Malhotra also had an Open House meeting with the Indian medical students studying at Bashkir State Medical University during which the students’ issues were discussed with the Rector and other University dignitaries. 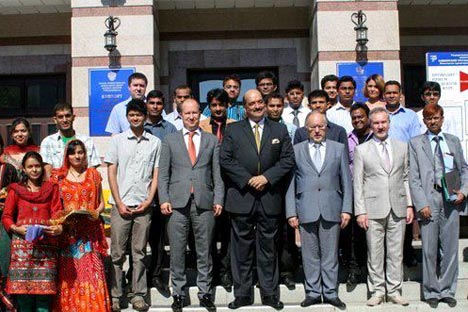 Ambassador Malhotra visited the Bashkortostan-India Friendship Society, at the Institute of Energy Resources Transportation Problems at Ufa. He was warmly received by Academician Ashgat Gumerov and the members of the Board of the Friendship Society and briefed about its activities. Cooperation programmes for the future were explored in detail. Ambassador Malhotra presented the Society with a Sitar and books on India and Indian themes.

The Ambassador visited the Bashkortostan State Puppet Theater at Ufa. It is the only children’s theater in Russia to win the Jawaharlal Nehru prize, which it received for performing the play “Indian Legend” based on the Ramayana. The puppet theater toured India in 1988, receiving a warm reception, and again in 2000. The Theater’s interest in Indian culture also led to its staging a new puppet show, “Panchatantra”, in 2005 in Ufa, which proved extremely popular with the local audience. Director Ilmar Almuhametov showed the Ambassador the puppets that twice visited India and arranged a special puppet show. Ambassador Malhotra congratulated the Theater on its 80th anniversary, and indicated he would start the process for the Theatre to again visit India so that a new generation of Indian children could welcome the talented artistes and enjoy their puppet shows. 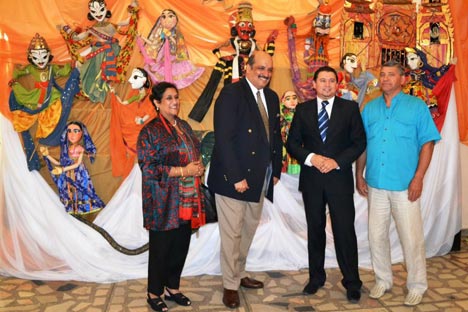 Ambassador Malhotra visited the Museum of Archaeology and Ethnography of the Russian Academy of Sciences, Ufa.  The Museum collection includes ethnographic items relating to the Bashkirs as well as valuable gold/silver jewellery items characteristic of the Sarmat culture of the 5th-3rd Centuries BC. The Museum was started by late Academician Rail Gumerovich Kuzeev, who also founded the Bashkortostan-India Friendship Society and was its President in 1973-1985. Academician Kuzeev’s affection for India could be seen from the Indian souvenirs he had proudly displayed in his Office. Appreciating the Museum’s collection, Ambassador Malhotra offered to explore cooperation in ethnographic research with similar museums in India.

In the context of Ambassador Malhotra's visit to Ufa, a Concert of Indian and Bashkir dance and music was also organized at the Bashkortostan National Youth Theatre at Ufa, with contributions by the Jawaharlal Nehru Cultural Centre, Moscow, which was graced by H. E. the Acting Minister of Culture of the Republic of Bashkortostan and other local dignitaries.

Mrs. Ira Malhotra separately visited the Home for the Elderly & Invalids, Ufa, and made a contribution to it on behalf of the Indian Women’s Association, Moscow.

Ambassador Malhotra and delegation also visited Sterlitamak, the second largest city of the Republic of Bashkortostan, and toured the chemical, PET, glass, and other units in its Industrial Park, as also the mineral water health resort at the nearby village of Krasnousolsk.