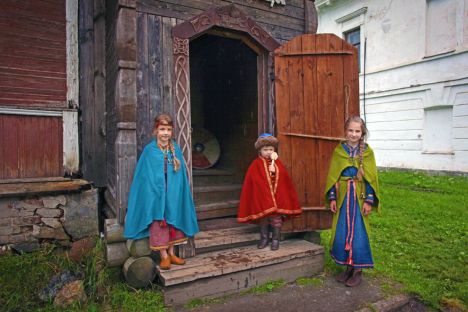 A remarkable museum of the Russian North, which has been operating for the past 10 years on the territory of the Belozersk kremlin.Source: Ricardo Marquina Montañana / RBTH

For nearly 10 years, one of the most remarkable museums of the Russian North has thrived in the Vologda Region town of Belozersk.

A remarkable museum of the Russian North, which has been operating for the past 10 years on the territory of the Belozersk kremlin.Source: Ricardo Marquina Montañana / RBTH

One of Russia’s oldest towns, Belozersk, will celebrate its 1050th anniversary in August. According to legend, Sineus, a younger brother of Prince Rurik of Novgorod became the prince there in 862.

Within the Vologda Region, Belozersk is known chiefly as the home of Lake Beloye, which reflects the sleepy town as in a mirror, but the town should be known for a remarkable museum of the Russian North, which has been operating for the past 10 years on the territory of the Belozersk kremlin. The museum’s founder, Igor Ruchin,

is an archaeologist by training. After moving from the city of Cherepovets to Belozersk, the first thing Ruchin did was found the Warriors of Sineus military and historical club and invited the townsfolk to participate in historical reconstructions. As time went on, the handmade clothes, household items, and weapons typical for the Rus region in a period between the 11th and 14th centuries, became a foundation of an exposition at the museum Prince’s Reception Hall.

A guide meeting guests by the entrance to the kremlin greets the guests in the doorway wearing a costume of a prince’s bodyguard. Although the guide is a businessman, he looks completely authentic in his costume.  Ruchin and his family also often greet visitors to the museum wearing the clothes of ancient Rus’. There are six children in the Ruchin family.

“Our eldest daughter is expecting a child, and we’ll soon see our eldest son off to serve in the army,” said Ruchin’s wife Tatiana as she lays out souvenirs - decorations in the Old Russian style. She takes care to hide her manicured hands – a sure sign of the 21st century.

Igor Ruchin explains the rules of the museum with pride. “Not only are you allowed, but, in fact, encouraged to touch, test, and try on everything in our museum,” Ruchin said. “We create everything you see with natural materials, the same that our ancestors used in the old days. For instance, we dye shirts red with an oak bark decoction. Obviously, it’s an arduous and costly affair. All the money we earn is invested back into the museum. No one funds us.”

The success of the museum in the Prince’s Reception Hall encouraged Ruchin to expand the facility.

“The work on the Reception Hall literally set us on fire. As the town awakened interest, more people started to visit us. Currently, Belozersk is in search of its own brand. Someone suggested we take a path of Veliky Ustyug and revive folktale characters but we turned to our history. As it happened, the Vikings were frequent guests in Belozersk since our town was located on the way from the Varangians to the Arabs. That’s how we got an idea to build a Viking house.”

At the Viking house, Ruchin sings Viking songs in Old Norse and encourages his guests to don costumes made of pelts, grind some grain with a stone crusher and drink home-made ale. The museum employs an in-house brewing master and a blacksmith able to turn crude metal into the finest rose petals. There is a separate children’s program that includes archery and javelin throwing. Despite not being on the usual tourist route, Ruchin’s museums receive about 10,000 visitors each year.

“It’s a small number, but on the scale of Belozersk, with its 10,000 inhabitants, it seems pretty impressive,” Ruchin said. “Not long ago we received Dan Karlsson, a Gotland University professor and a renowned archaeologist. He is interested in looking for traces of the Viking civilization on the territory of Rus. He enjoyed our museum so much that he included Belozersk in the international touristic Viking trail. These are exactly his words: ‘If you build infrastructure, we’ll swamp you with tourists.’

“Unfortunately, there’s nowhere we can receive foreigners in Belozersk. What can we do? Knyazhesky Dom, our tourist company, is the only one in town and, anyway, it employs only three people. Every time we meet with state officials, we ask of only one thing, that is to tidy up the kremlin, so that our guests wouldn’t have to wade through the puddles. I mean, there’re some people in this town who think it’s our duty to repair everything. “Since you’re making money off our history, go ahead and restore it all,” they say.”