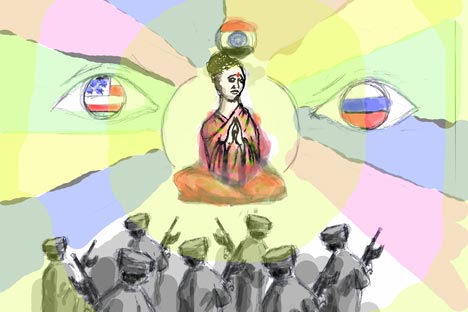 The ascendancy of Wahhabism in West Asia will pose a serious threat to India's social harmony and national security as time passes.

The Jerusalem Post newspaper recently featured an illuminating piece on thegrowing threat of Wahhabism in India. We in India often speak propagandistically about the threat of a 'Talibanised' Pakistan to our country, overlooking that Pakistan is not an aberration in the region. The spectre that haunts Afghanistan, Pakistan and India (and Central Asia) alike is in reality the spectre of Wahhabism.

The JP opinion-piece is written by an American professor Hayat Alvi for whom India is her “birth country”, which she wrote following a recent homecoming after many years to witness that grotesque changes that are slowly disfiguring the face of the Muslim society in India.

For obvious reasons of political expediency, the topic of the creeping "Wahhabisation" of India is a holy cow, which no sensible Indian politician would want to talk about. Yet, the cancer is spreading.

Equally, the opportunistic foreign-policy pursued by the UPA government with regard to West Asia is self-evident. India loses its voice when it comes to the blatant Saudi and Qatari interference in Syria because of the charms of “green money.”

India chooses to ignore the threat to its national security posed by the rise of Salafism in its "extended neighborhood" under Saudi and Qatari patronage or instigation in the downstream of the socio-political awakening in the West Asian region known as the "Arab Spring". The plain truth is that there is nothing like absolute security, but India seems to think it is possible. And the ascendancy of Wahhabism in West Asia will pose a serious threat to India's social harmony and national security as time passes.

Consider the following. Saudi Arabia is weighing in on the human rights issue in Syria. Yet, it is a country where protestors meet with death sentence; where women cannot get jobs unless they get permission from their male guardians; where women cannot drive motor cars or walk in public places without male escorts. The Saudi regime claims this as the country's legacy but the Saudi princes give an entirely different account of themselves when they go berserk in the fleshpots of Beirut or Manama.

Massive repression is the order of the day in the eastern provinces of Saudi Arabia where the Shi'ite majority is clamoring for empowerment. Violent demonstrations broke out last week following the detention of a revered Shi'ite cleric. The pictures posted on the internet tell a story of growing popular revolt against the Saudi regime and the Wahhabi establishment.

Given the paradoxes of the Syrian crisis with the Saudis and Qataris fueling a civil war in that country, it was a matter of time before some voices in the international community would be heard articulating the concerns over the dangerous game of Wahhabisation that is being played out in the Middle East. Moscow has done just that.

Russia's representative on human rights, democracy and the rule of law K. K. Dolgov issued a statement in Moscow on Tuesday expressing “great concerns” over the latest incidents of anti-Shi’ite repression in the eastern province of Saudi Arabia. Russia demanded that the Saudi regime should change its repressive ways and sectarian policies and instead ought to "ensure the observance of conventional human rights, including the right for freedom of expression of opinion, peaceful demonstrations and freedom of associations."

This is an unprecedented and bold statement. Russia has every reason not to fall into the West’s cold-war era trap of being pitted as the antithesis of Islam. Yet, Russia’s motivations to speak out are compelling. Russia stands to lose heavily if the virus of Wahhabism spreads in the so-called “Greater Middle East.” Traces of Wahhabism have appeared in parts of North Caucasus and in the Central Asian steppes. Ferghana Valley is seething. Afghanistan has become the playpen of Wahhabists. Pakistan is on the boil.

Evidently, Moscow estimated that it is high time someone exposes the rank hypocrisy of the Saudi regime in espousing the cause of democratic reform in Syria. But the Saudis are not used to such finger-pointing. Riyadh has since hit back alleging that Moscow is indulging in "blatant and unjustified intervention" in Saudi Arabia's internal affairs -- which is exactly what Riyadh is doing in Libya, Syria, Bahrain, Yemen and Egypt.

Will Russia's open criticism put the Saudi regime to shame? Impossible. It is not only a matter of the thick hide, but so long as the United States looks away and acquiesces with the Saudi regime's policies, there is no cause for worry as far as Riyadh is concerned. And the US is quite happy with things as they are. After all, the Saudi princes keep deposits of billions of dollars in American banks, apart from making other investments that nurture the US economy. The Saudi regime just placed an order with the US for $60 billion worth arms.

In any case, why should the US lose sleep if the Saudi regime propagates Wahhabism? The debris, after all, falls on countries like Afghanistan or India and Pakistan whereas the western world has nothing to worry on that score.

Again, the US is experimenting with the potentials of Islamism as an instrument of regional politics. In Egypt, Washington aspires to be the mediator between the Muslim Brotherhood and the military establishment. Libya is another laboratory where the harnessing of the forces of radical Islam is far advanced.

In Afghanistan itself, the untapped potential of militant Islam is engaging the US attention. Islamism, from the US perspective, is the instrument that can come handy in forcing “regime change” in Central Asia. The Central Asian situation is getting ripe for Islamic revolution in the absence of democratic opposition to the autocratic regimes in that region and the militants from Afghanistan are preparing for future ‘jihadi’ campaigns by setting up training camps in the mountainous region of Badakhshan bordering Tajikistan.

Then, of course, beyond Central Asia lies China’s Xinjiang Autonomous region. The ascendancy of the Taliban in Afghanistan will be just the inspiration that the ‘jihadis’ would be looking for to make a bid for political power in Central Asia. On the other hand, the rise of militant Islam gives the perfect pretext – fight against “al-Qaeda” – for the US to establish its military presence in the Central Asian region in the same way that the long-term Western military involvement in Afghanistan is sought to be justified.

Professor Alvi is right: "Let's not forget that Wahhabism is one of the ideologies that inspired the birth of the Taliban. Indoctrination and forced conformity to their ultra-orthodox interpretation of Islam constitute the heart of the ideology. These methodologies can occur subtly, as in the case of India, through the importation of ideologies by the migrant workers returning from the Gulf."

Alas, Prof. Alvi left out that the Saudi charm also spreads over India's elites. Unsurprisingly, India's "pro-US" lobbyists have also become foot soldiers of the Saudi regime. "It's geopolitics, Stupid!" -- they would say.

But then, do not forget that the Afghan jihad of the 1980s was also conceived as a geopolitical game by the US and Saudi Arabia. Again, the birth of the Taliban movement in the early 1990s in Afghanistan was also attributed to geopolitics. The Saudis found the idea to be attractive that a Wahhabi movement dominating Afghanistan would be the perfect antidote to the spread of Iran's influence, apart from being the instrument of Saudi policies in the “post-Soviet” Central Asian region.

The US, in turn, found the Taliban irresistible because Mullah Omar would "stabilise" Afghanistan through which thereupon UNOCAL (with whom Hamid Karzai worked as a consultant) could lay a gas pipeline connecting Turkmenistan with the port of Karachi. And Pakistan fancied that the Taliban would be just the perfect "strategic asset" to keep Afghanistan under its thumb for ever after.

So, Saudi Arabia, US and Pakistan got together and had a great time charioting the Taliban toward Kabul in the mid-1990s. Saudi Arabia financed the Taliban and the Pakistani military propelled it on the battlefield, while the US diplomacy tried to finesse the Taliban’s geopolitical potential. Alvi notes that Afghanistan became highly susceptible to an "ideological competition" between Sufism and Wahhabism. The rest is history, as they say.

This “ideological competition” is under way in India too, as Alvi pointedly describes. The shocking thing is nonetheless that a massive white-washing of the Saudi regime is going on in India on the specious plea by the Indian strategic pundits that Riyadh is dumping its ally Pakistan and is about to become India's key ally in the fight against terrorism.

This is a bit like “Waiting for Godot” – Indian pundits have been waiting for ages for the Saudi leopard to change its colors and become saffron-tinged – ignorant or willingly oblivious to the profundity of the Saudi-Pakistani relationship. Of course, it suits Washington at this point in time to spread the canard that there could be a US-Saudi-Indian axis to fight terrorism in the region.

In a long-term perspective, India is being myopic in not taking note of the threat of Wahhabism in its “extended neighbourhood” and even in parts of India. It may be Syria's curse today. But it could as well be India's curse tomorrow. Alvi writes: "If anyone needs proof of Salafi / Wahhabi intolerance and ignorance, take a look at what they have done to the world heritage sites and mausoleums in Timbuktu, Mali, recently. They exhibited the same intolerance and ignorance that the Taliban did when they destroyed the ancient Buddha statues in Bamyan, Afghanistan."