Turbo speed for track and field 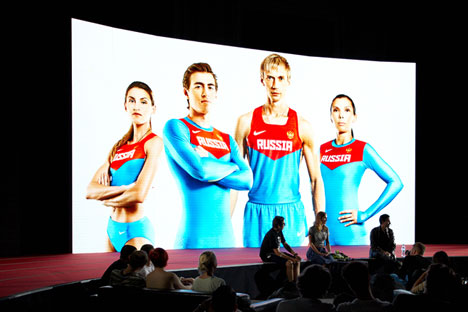 Russia’s track-and-field stars have revealed the uniforms they will be wearing later this month in the London Olympics. The uniforms were created by Nike, and Nike Global Olympic Creative Director Martin Lotti joined All-Russian Track and Field Federation President Vladimir Balakhnichev in Moscow to present the collection.

“All the design elements we used are associated with Russia. These are shown in the color, the typeface, as well as the emblem of the Federation,” said Lotti. The colors of the new uniforms are predominantly blue and red, and the suits are decorated with gold designs. The outfit for the marathon runners is a little different: They will run in white jerseys. All the suits will have the distinctive element of the double-headed eagle over the heart.

The outfits use the latest innovations in athletic wear. For example, the Flykit running shoes weigh only 160 grams and their uppers are seamless. According to Nike, the design of the running shoe was inspired by the athletes themselves, who said they wanted shoes that were as comfortable as socks – snug-fitting and barely noticeable).

“We have a rule at Nike, ‘Listen to the athletes.’ We did that for the design of the Russian national team,” said Lotti.

High-jumper Silnov said: “The most important thing is not to be aware of the uniform and that nothing impedes your running. As for how future Olympic Games will turn out, I cannot say. I don't want to hazard a guess. I'm just trying to do my job and the results will tell.”

The main innovation for the London Olympics was the TurboSpeed suit. According to experts, the TurboSpeed suit gives the wearer an advantage of 0.023 seconds or 0.13 meters in the 100-meter race. The TurboSpeed suit was made taking into consideration the trajectory of a golf ball. “The golf ball is made with a texture that lets it move faster and more efficiently through the air,” said the suit’s designer. Likewise, the Turbospeed suit is light on the shoulders and back.

The new outfits also follow the trend toward eco-friendly fashion. They are made from recycled plastic bottles, averaging about14 per suit.

Said runner Anastasia Kapachinskaya about the new outfits: “The uniform must first of all be comfortable and light, so that nothing distracts you from the competition. In my discipline, speed is the main thing. The suit developed in the Nike laboratory helps me to be faster on the track. And I am glad that the design for our outfits incorporates Russian elements.”