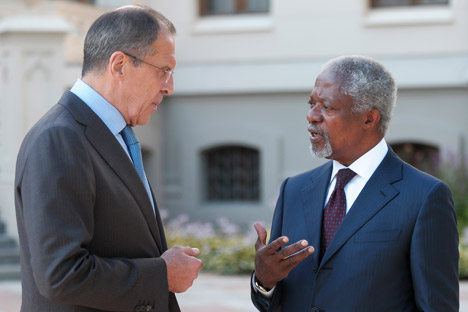 Although brief, the special envoy’s meetings in Moscow with Russian leadership may help find a real solution to the Syrian crisis.

The threat of the Syria conflict escalating into a full-scale civil war with a clear division along religious and ethnic lines is bringing the positions of countries seeking a settlement closer together, as demonstrated by recent meetings in Moscow between the Russian leadership and UN Special Envoy to Syria Kofi Annan.

Reports on the outcome of the 90-minute meeting between Russian President Vladimir Putin and UN Special Envoy to Syria Kofi Annan were sparse, yet the mutual restraint seems to suggest that both Moscow and Annan are still working on a new version of the peace plan.

Before visiting Russia, Annan met with Syrian President Bashar Assad and the leadership of Iran. No breakthrough occurred, however, since that can only come about if the conflicting sides negotiate directly. For its part, Moscow has held meetings with the main Syrian opposition forces, in particular the leaders of the Syrian National Council, a meeting that marked the beginning of a dialogue with that influential party to the Syrian conflict.

Speaking to journalists after his meeting with Putin, Annan expressed his confidence that a settlement compromise would be reached between the UN Security Council members. Russian Foreign Minister Sergei Lavrov also spoke in favor of a compromise. “We achieved a difficult compromise in Geneva at the conference called by Mr. Annan on June 30. The Geneva document was passed by consensus. I see no reason why we could not agree on the same basis at the Security Council,” Lavrov said after the Kremlin talks.

Judging from the tone of the statements made at the short briefing, Moscow and Annan not only understand each other fully, they are committed to working together. “I hope the Security Council will send a clear signal that what is happening in Syria is unacceptable and that the violence must stop,” Annan said, adding: “We will push for it together.”

Nevertheless, it is clear that the Annan plan, on which such hopes have been pinned in recent months, has failed to deliver the desired results, as the conflict in Syria is developing into a civil war. The task facing the members of the UN Security Council is not, therefore, to extend the mandate of the observer mission by three months, as Russia is proposing, or by 45 days, as the UK and the U.S. suggest. The issue, rather, is how to achieve a ceasefire – otherwise a political dialogue between the warring sides, for which both Moscow and Annan are working, is impossible.

After the meeting in the Kremlin, Moscow has made some changes to a draft UN Security Council resolution it is proposing for a vote later this week – before the current observer mission mandate expires.

“It has a number of elements that concern the humanitarian situation, the human rights situation and the local ceasefire mechanism,” Alexander Pankin, deputy Russian ambassador to the UN, told journalists.

The initiative of a gradual ceasefire “was discussed by Kofi Annan with the Syrian leadership in Damascus,” Pankin said. “The idea looks effective enough, so we have proposed it.”

The idea was described in more detail in the press release that came from the Russian president’s office on the eve of the talks with Annan. “We do not rule out an enlargement of the political component of the tasks facing the UN Observer Mission in Syria, within which we deem it necessary to charge the UN observers with agreeing on a concrete plan with all the Syrian sides for synchronized ceasefire and simultaneous withdrawal by government forces and militant units from each city and community where armed confrontation is being waged.”

That means Russia wants the UN mission in Syria to be vested not only with information functions, but also with political and mediatory ones: the right to negotiate a ceasefire with the conflicting sides. That is a change that may give a peaceful settlement of the Syrian crisis a chance.

Moscow would hardly have put out a new UN resolution with such a proposal if Annan were against it. This is apparently the main result of his meeting with Putin on Tuesday.