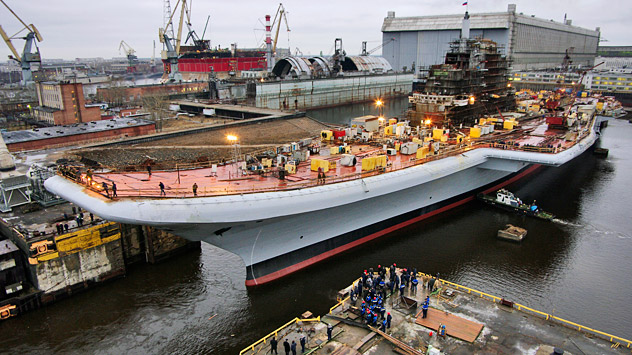 The Indian Navy's newest aircraft carrier has headed into the Barents Sea for second-stage sea trials, as part of its refit by Russia's Sevmash shipyard.

The Indian Navy's newest aircraft carrier, the Vikramaditya, has headed into the Barents Sea for second-stage sea trials, as part of its refit by Russia's Sevmash shipyard, Captain Vadim Serga of Russia's Northern Fleet information service said on Monday.

The Vikramaditya, formerly the Soviet Union's Admiral Gorshkov, has finished a long-delayed refit for the Indian Navy at Sevmash on the Kola peninsula. The ship was extensively modified to undertake STOBAR (short takeoff but assisted recovery) operations with MiG-29K naval fighter aircraft, as well as receiving new air defense, communications and navigations systems.

Vikramaditya takes to the sea

“The Vikramaditya is currently successfully undertaking the second round of shipyard sea trials, during which the ship will test its main systems, main and secondary power systems, communications and navigation systems,” Serga said.

The ship is being operated by a Northern Fleet crew, many of whom have experience with carrier operations on the Russian Navy's Admiral of the Soviet Union Kuznetsov. Also on board are Sevmash shipyard specialists and Indian Navy officers.

India and Russia signed a $947 million dollar deal in 2005 for the purchase of the carrier, but delivery has already been delayed twice, pushing up the cost of refurbishing the carrier to $2.3 billion.

The Vikramaditya - as the Admiral Gorshkov - was originally laid down in 1978 at the Nikolayev South shipyard in Ukraine, launched in 1982, and commissioned with the Soviet Navy in 1987.

Reincarnated “Conqueror” to wake up after two decades of idle time

The Russia-India military and technological cooperation programme initiated by Rosoboronexport put the Baku/Admiral Gorshkov’s retirement plans in the warm Indian Ocean on hold and opened up prospects for its true revival and reincarnation under the name of Vikramaditya. On different occasions, this Indian word has been translated variously, including “Brave as the Sun”, “The Almighty” and “Conqueror”. But, patriotic pathos aside, this is what actually happened: after two decades of idle time, the ship regained the ability to move, was equipped with advanced control and navigation systems, and its flight deck, at the behest of the customer, was extended, raised and turned into a fully-fledged floating airfield.

The Vikramaditya air carrier has undergone massive refurbishment at the Russian shipyard Sevmash. According to the intergovernmental package agreement signed in New-Delhi in January 2004, the former Admiral Gorshkov was passed to the Indian side free of charge on condition of its modernisation at the Sevmash shipyard. Russia will also teach the Indian Vikramaditya crew and prepare the infrastructure for the vessel’s base in the Indian Ocean. The expected term of service of the refurbished air carrier is 30 years.

Since 2004 the Nevsky project and construction bureau Sevmash fulfilled an immense scope of work. The air carrier was equipped with flight deck and ski-jump take-off for the MiG-29K fighter jets. The air carrier’s body frame was renovated and transformed for tackling new tasks and fitted with modern equipment. New cable routes with total length more than 2,000 kms were built. The air carrier got new navigation and radio location systems.

In 2012 the total cost of military production imported to India from Russia will amount to $7.34 bln, Igor Korotchenko, General Director of the Centre of analysis of the world armaments trade, said. India has been the biggest importer of the Russian weapons and military equipment since 2007. In particular, passing the Vikramaditya air carrier to India in December will be the most expensive contract in 2012, with the final modernisation cost equalling $2.34 bln. Besides, Russia will pass to India two out of three frigates of the second party of the project evaluated at about $1 bln, one frigate has already been passed, Korotchenko said. Indian Navy’s lease of the nuclear submarine Nerpa 971 at the cost of $920 mln in January has been the third biggest transfer.

According to the Centre of analysis of the world armaments trade, Russia will be the leader in the Indian weapons market up to 2015, mostly due to the big deliveries in 2012. The expected volume of deliveries for four years is $14.6 bln. The USA is expected to hold the second place with its deliveries’ volume making $ 10.425 bln in the next four years.

This story was complied from reporting by RIA novosti and Vzglyad.